The historic milestone of 34 state Article V resolutions for a Balanced Budget Amendment has been achieved, and surprisingly it happened over 40 years ago.

All Americans should be shocked at the latest report documenting that Congress has completely ignored their Constitutional duty to count Article V state resolutions. After extensive research of on-line records compiled from the Congressional Record and the Article V Library, irrefutable proof has been uncovered of gross negligence by Congress.

Thanks to a newly released research study, it was discovered that Nevada’s Article V Resolution (Application) for a Balanced Budget Amendment Convention, published in the Congressional Record on February 8, 1979, was the 34th and final Application needed to mandate that Congress “call” an Amendment Convention of States.

Having accomplished this Article V Constitutional threshold requirement of 34 in 1979, the call status has been locked-in waiting for Congress to respond ever since. More importantly, any subsequent actions by states on the subject in those ensuing years, are classified “of no legal import.” This means any subsequent state resolutions attempting to rescind a state’s previous Article V resolution, have no legal standing and are considered “null and void.”

State legislators were shocked and outraged when they were first made aware of this affront to the states due to Congressional gross negligence. Now fully engaged, preparations to end this injustice by Congress, the trampling of state rights and trying to silence the voice of the people on critical issues being ignored by Congress are about to be launched.

Back in 1979 the federal debt was $830 Billion and without the benefit of a fiscal restraining amendment, in the intervening 43 years, Congress has run up an astonishing $29 Trillion dollars of federal debt.  And still no call for an amendment convention, as required under Article V of the U.S. Constitution. Their excuse, “an administrative gap” meaning they did not have a process to count hundreds of applications sent to Congress from state legislatures over the last 240 years . . . so it is not their fault. 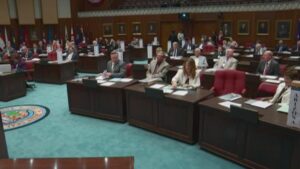 States are refusing to accept this lame Congressional excuse. The right of states to petition the federal government has been trampled-on for centuries and virtually eliminated because of a clerical error?

Ignoring their responsibility to administer the hundreds of Article V resolutions sent to Congress by the state legislatures must not be tolerated any longer.  By deliberately thwarting the legitimate constitutional actions of the states to formally advance resolutions expressing their concerns, Congress has in effect, revoked every state’s constitutional right to petition the federal government on important matters of heightened interest to their citizens. Whatever degree of trust and integrity Congress had remaining with the states is now completely lost.

As a direct result of this Constitutional deception, states are quickly advancing legislation to demand Congress acknowledge the call for an amendment convention. State Attorney Generals are also preparing a mandamus suit designed to have the courts force Congress to IMMEDIATELY move forward and call the amendment convention of state legislatures.

Given the continued fiscal madness in Washington, it is clear that Congress has no intention of curbing their addiction to out-of-control federal spending without being compelled to do so by the states. That is why 90% of voters understand that a state proposed fiscal responsibility amendment is our best solution to gradually moderate the federal budget to a more sustainable level and secure the prosperity of all Americans for generations to come.

The Summer of 2022 should be when the first Article V convention is scheduled and several states are already vying for the honor to host. Selecting the mode of state conventions to ratify would allow statewide voting in November, 2022 allowing the voting public choose “for” or “against” passage of any potential fiscal responsibility amendment into law.

Let Us Vote For BBA