A Republic, If You Can Keep It

On a warm September day in 1787, Benjamin Franklin emerged from Independence Hall in Philadelphia. Franklin was leaving what has come to be known as The Constitutional Convention. Originally it was simply the Philadelphia Convention, which was intended solely to improve upon the Articles of Confederation, the prevailing government of the time. As legend has it, a man approached him and demanded, “What have you wrought?” to which Franklin succinctly replied, “A Republic, if you can keep it.”

Franklin, known for so many famous quotes he could make Yogi Berra appear to be a mute, delivered that day what might well be his most insightful, important, and prescient statement of his 84-year life of achievement. Franklin’s proclamation that day was more of a challenge, or test, that we, as Americans, have been taking for nearly 232 years.

The fledgling United States of 1787 was comprised of 13 separate and distinct states that formed a union of common purpose. Regional differences, sectional differences, and philosophical differences existed. What might be called, in a non-pejorative sense, tribalism. Sound familiar? Yet the Founders, Franklin among them, devised a manner in which these 13 entities could form “a more perfect Union.”

Certain aspects of a national union were taken as universally accepted. Among them, provide for the common defense, ensure domestic tranquility, and, most importantly, “secure the Blessings of Liberty.”

Yet the Founders recognized the sectional differences that existed among the several states. Some, chief among them Thomas Jefferson, favored an agrarian society while others, a more industrial and financial based approach. Culture in one area of the country lay in stark contrast to that in another. The Founders recognized that, and devised a Constitution that allowed for it.

A strong Federal Republic, where each state would defend one another, without imposing its will upon the whole. Thanks to that concept we now have 50 states, all enjoying the liberties and protections afforded by the Constitution, yet with the capacity for individual sovereignty compromised of citizens better able to exercise control over their respective states, counties, cities, and communities.

Some national sins were so divisive, slavery to be blunt, that a Civil War was required to see if we could keep our Republic. Other issues, universal suffrage and equal protection et al., were resolved through a national amendment process. And the Republic endured. 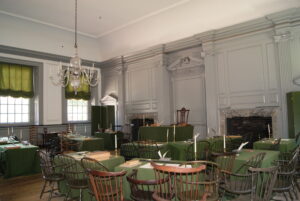 Today we are faced with 21st century regional and sectional differences that divide us as much as any over the past two centuries. And yet, adherence to the principles set out in Philadelphia 200 years ago can guide us through them without dissolution.

Detroit, Chicago, and New York have serious crime rates that require serious solutions. Perhaps their limitations on certain gun rights are logical, perhaps not. But locally decided. More rural areas such as Arizona, Texas, and Colorado have justifiable reasons to ensure citizens have greater access to guns. Illegal border traffickers, a greater interest in hunting, and more. To each, the other’s position may seem outlandish and worthy of mockery. Isn’t it great that we have a system that allows for these different states and cities to make self-determination?

This is what our Constitutional system has allowed for. More specifically, as the Tenth Amendment, the final of the Bill of Rights, states, “The powers not delegated to the United States by the Constitution, nor prohibited by it to the States, are reserved to the States respectively, or to the people.”

When people from New York tell people from Alabama what they can or cannot do, and vice versa, they act in direct violation of the very principles our Constitution was founded upon. They ignore the compromises made during that hot summer of 1787.

Most importantly, we must remind ourselves what Benjamin Franklin wisely replied, “A Republic, if you can keep it.”