Who decides? The choice belongs in one place only: We the People!

I was hoping for a peaceful and truthful transition of DC power, but it looks like revenge against the outgoing “team” is carrying the day. How do we simply talk, complain, pray, chat, discuss, help, debate, comfort, empathize, argue, posit, when someone else, a third party, is filtering the words that are acceptable to only them? Speech rules.

The subject here is the seizure of power beyond the Constitutions perceived borders. Perceived, because the documents boundaries have been broached in many other areas, but this is about a broadening of the control of your free speech rights by the private sector.

With our Declaration of Independence, we stood up against a tyrannical government. We are approaching something like that again today but with a different playbook.

America’s governance has changed over the centuries, but radically in the last fifty to one hundred years. To see how much, we need to compare who we were in the mid-to-late 1700s with who we are today. To question ourselves on where we might be on the historical arc of Western Civilization and our Judeo-Christian value system. Where do truth, honesty, love, neighbors, and God fit into our lives.

But we should consider the growth and control of the expansion of all governments across the land. From hair braiding rules to shipping pallets of your money as foreign aid.

Recall that the Constitution guaranteed that the ultimate power lies with We the People! Not in the town hall, state capitol, the national capitol or an elite segment of the private sector. That this form of a republic was to serve us, We the People when we choose and employ representatives. We, the People, have all the Constitutions rights and privileges…they have none. The representatives were to serve us, at our pleasure. However, they have found ways of hiding from us while being in full view.

The Founders Constitution defined our government to be limited and with checks and balances. The Bill of Rights defined our protections from future tyrannical governance. In the winds blowing across America over the last century a new threat to the People’s sovereignty has been exposed. It is one not visualized by the Founders. Wayward governance and technology have exposed one of the foibles of mankind: crony-capitalism. 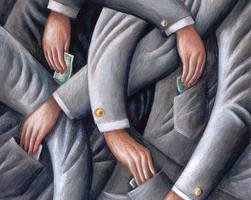 Crony capitalism is defined as corporate funding and resources mixing with political power and influence. It’s a concoction made by stirring together Wall Street/Silicon Valley and the political elite Establishment/Special Interest/Parties.

It appears that the corporate elites and politicians have covertly created a good-old boy network within the DC infrastructure as reported here.

The unfortunate part of all of this is the loss of what We the People expected from our Constitutional rights, particularly the loss of free speech. These new threats were not expected and therefore, not covered by the Constitution’s authors. The principles of individual liberty were however, on the minds of the Founders as basic ideas for the new America. This current abuse lies outside of the normal constitutional boundaries when considering the private versus government sectors.

When private interests mix with government power, competition is neutralized in favor of those controlling the economy and governance structure. The intent of our Constitution was to “protect the people from government” and that threat has blossomed with the expansion of crony-capitalism. Today, we incorrectly assume that freedoms extend to all of our rights as an American. To be so, they would have to be made legal under the Constitution.

Before the union of business and politicians into cronyism, the citizen entrepreneur adapted to the changes in competition within a free market system.

Today, a number of new entrepreneurs are attempting to compete within the media market in an effort to allow We the People (consumer) to decide if WE want their offerings or not. But the decision should be ours according to the original Founding ideal and not by a political party or third party.

Will third party regulated competition succeed as Duck Duck Go, Mewe, Protonmail, Parler, Codias, GAB, Rumble, Yippy, Clouthub, startpage, and others fight to win a place against Facebook, Google, Citibank, Amazon, YouTube etc? The same is true of media alternatives such as NewsMax, OAN, Epoch Times and others. And will these Big Corporations correct their business models voluntarily or will we allow government to continue to protect them from us?

What We the People must do now.

We’ve passed the stage of who will be president. We are entering a new phase now. Because of these expanded threats to our country, this new phase requires American citizens to understand the motives and canon that created this Nation and how we the people arrived in this peculiar place today. And then, how do we go forward.

Recall that the Supreme Court ruled in Marsh v. Alabama (1946) that the private sector’s notion that laws do not hold them culpable when it comes to public infrastructure as invalid. Justice Hugo Blacks majority opinion declared, “Ownership does not always mean absolute dominion. The more an owner, for his advantage, opens up his property for use by the public in general, the more do his rights become circumscribed by the statutory and constitutional rights of those who use it… Thus, the owners of privately held bridges, ferries, turnpikes and railroads may not operate them as freely as a farmer does his farm.” This is an important statement for us to consider if We the People feel legislative control is necessary due to expanded control and monopolization of a large segment of the society or economy.

We the People in the several states should consider using the little-known process used over the past four centuries to settle disagreements. That process selected commissioners or delegates to speak for us in presenting our proposals. Then they debated their merits, voted on proposed solutions, and presented those solutions to the American people or their legislatures for a final vote, up or down.

In the words of the Constitution’s Article V, “…or, on the application of the legislatures of two thirds of the states, shall call a convention for proposing amendments…”

It is time to reexamine America’s founding principles; are we upholding them today or not. Do we need to restate them? They date back many thousands of years providing the Founders with key Judeo-Christian and Western Civilization philosophy and law.

Our current path is based on newer, non-Biblical and unreasoned ideas that originated only 150-180 years ago and assembled in a misunderstanding of what constituted a successful versus failed society. Their efforts have failed since their experiments began.

The Founders risked their fortunes, their wealth, their reputation, their very lives on the 4400-word document that defined how our government was to work. Even though they knew it was flawed, they showed us how to repair it by amending it using the then common process: convention by the people and their states. They strove to protect an individual’s belief system: republicanism. That government did not exist to favor one faction over another as is found in a democracy. In fact, they abhorred factions. No, they insisted not on democracy but a complex republic design with checks and balances that would withstand the very nature of mankind foibles: the sins of pride, vanity, and envy. They prayed to God for guidance and they received it. Madison said that, “it is incumbent on their successors to improve and perpetuate…” the Constitution. Washington, Jefferson, Hamilton, et al encouraged us to utilize the tool in Article V when necessary.

Have faith in what the Founders trusted in. Trust in God. God Bless America

Mike Kapic is the editor of HuntForLiberty.com, author on the conventions history, past State Director for the Arizona Convention of States Project, and engaged in Article V education and the promotion of an amending convention.