On The State of Government Schools

The Torches Are Being Lit, The Battle Is Being Joined, and The Truth Is Being Pursued. It’s Time To Join Up!

The “bloom is off the rose,” “the man behind the curtain has been revealed,” or thank goodness, the truth is finally coming to light.  Events of the last several months have revealed the arrogance, condescension, non-responsiveness, and aversion to disclosure of the so-called “public servants” who govern our taxpayer-funded public education system.  Not surprisingly, many of them have shown themselves to be bullies, which is an irony for the ages and should not be lost on us.

We have delegated the incredible responsibility of educating our children for 13 years (or more) to the self-absorbed masters of this establishment.   They’re using every procedural tool at their disposal, and many that aren’t, to hide the truth from those of us who gave these students life, and who have the ultimate responsibility for their upbringing.  They behave as if they’re operating under some sort of national security dictum and thumbing their noses at those who pay them.  They do everything in their power to block challenges and maintain their monopolistic control of the education sector.

We mustn’t ignore the influence of these “masters” operating at the national level.  Take the National School Boards Association (NSBA), which coaches and mentors state and local school boards in the tricks of the trade.  You can find them here.  Their HQ is in the DC Capitol Region; why do you think that is?  They are lobbyists. Their stock in trade is staying closely coupled to those they can influence. They build long-term relationships with the centers of power, just as anyone in their shoes would.  They are bonafide swamp denizens.  Their website includes this passage:

NSBA shall regularly assess, adjust, and align all of its services to ensure consistency with its core purpose and shall:

The term “their collective will” should give you pause, though if you have not mucked around in this Beltway Based power broker world before, it may take a while to sense the danger to local taxpayer and parental interests.  When you see mention of “The Council of School Attorneys” on their site, you might even get the vapors, and you should.

This is like the model used by the National Education Association (NEA), and the American Federation of Teachers (AFT; does the name Randi Weingarten ring any bells?)  They are lobbyists at the federal level, and coach state and local teachers’ union chapters in the fine “art” of getting their way, taxpayers and students be damned.

Marvel at the chutzpah of this quote from a former head of the AFT:

The main point of the foregoing is to convince you that the problems being unearthed and challenged by newly energized citizens are direct consequences of an education establishment that exerts immense powers on our highest elected officials and the deep state that controls what we pay those who educate our children.  Local School Boards are at the very bottom of the pyramid and exert little sway in policy application.  Their primary role is to weep and gnash teeth about the need for more funding from local taxpayers.

The influence of the Capitol area (NCR – National Capitol Region to insiders) players is why the Attorney General of the US, the head of the Federal Law Enforcement Apparatus, including the FBI, issued a chilling letter about citizen involvement at local School Board meetings!  The NSBA admitted to lobbying for such a letter and later played CYA by “apologizing” for their thoughts.  Too late; Garland called upon the G-men in the FBI to take control of this threat to our civil order and the very lives of those who run our schools.  You can read his memo here.  So the next time you go to a School Board meeting and see a stranger in a dark suit with an earpiece whispering into his wrist, watch yourself.  These are not gentlefolk; they don’t think of themselves as “public servants.”

Multiple things have come together in recent months to push parents and taxpayers to act out the famous line from Network: ‘I’M AS MAD AS HELL, AND I’M NOT GOING TO TAKE THIS ANYMORE!’ (See the entirety of the rant here.)  Maternal and paternal instincts have kicked in with courage and conviction rarely seen.  Hope springs from such things. There is a rough road ahead to change a bureaucracy that has usually been treated as above reproach, on a holy mission, and dealing in things that surpass the understanding of ordinary people, credulous rubes, and the like.  But patriots are appearing right before our eyes; their commitment is obvious and laudable.

I’m old enough to have been schooled in the era of flashcards, going to the blackboard to solve math problems, and cleaning the blackboards, and clapping the erasers at the end of the school day.  The phrase “reading, ‘riting, and ‘rithmetic” has real meaning to me.  I believe we establish and fund public schools to teach skills vital to living as an adult, and that’s what are the “three R’s.”

To those who say such basics and “antiquated thinking” are irrelevant, and that they know better what “human development” entails, I say “Rubbish.”  “Teachers Colleges” have been disappeared from the “Higher Education” landscape.  “Child development” and similar terminology have become the norm.  Teaching is so yesterday.  Not enough self-esteem potential in that career path, perhaps?

All the other subjects are in the category of knowledge and are important to a fuller life and a better understanding of the world we inhabit.  We don’t send our children to school to be indoctrinated with socio-political doctrine and ideology; we don’t want them to be culturally re-engineered.  We don’t want or expect “educators” to preach and inculcate socio-political theology, which has become commonplace.

Parents are fundamentally responsible for raising their children to be good and productive citizens, with the moral and social standards the family embraces.  Public school educators who decide to take these responsibilities upon themselves are transgressing the sacred boundaries of family life and personal growth, and in most cases, they do it without direct knowledge or approval of the children’s parents.  Only after the fact, if at all, does the truth become known by Mom & Dad.

Until this past year, that is.  What a difference “remote learning” has made.  In a sense, Mom and/or Dad have been sitting next to Johnny and Suzy in their classrooms as they are being “taught,” if we can use that term.  And so, we find ourselves at the current highly agitated state of affairs, as the public takes on those they hold responsible, and from whom they demand open and responsive disclosure, along with accountability for their actions.  Government school enrollment is suddenly shrinking, and homeschooling is surging in popularity.  Go figure. 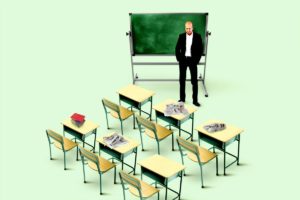 I’m long since past having children in school.  But I have grandchildren, and hopefully, they will have children and grandchildren of their own.  In addition, I’ve become afflicted with intellectual curiosity in my old age. I have an insatiable thirst for knowledge of just what the hell is going on, and how authorities are spending the funds they compel from us.  I have enough experience paying attention to such things to be distrusting and suspicious in every dimension, and at every level: local, state, and federal.

Ironically, the key to grappling with this suddenly visible ball of snakes is to educate ourselves.  First and foremost in the areas of curricula. Exactly what are they teaching our children?  And why?  Who decided that is what to teach? Who approved it?  Did they run it by the parents and public before making these decisions?  Who is making their living designing, marketing, and selling these materials?

These questions are only the beginning of understanding where we are in our government education system.  Let’s be clear.  “Public” is a euphemism; we really need to view this as government, at all levels, taking over the upbringing of our children, and doing everything in their power with their allies (teachers’ unions, for example) to see that they go unchallenged.  Despite what they call themselves, they work very hard to be anything but “public” about what they do and how.

I became curious about curriculum details more than a year ago.  I contacted a local school board member I’ve known for some time and asked to be provided with some data.  He was a bit slow in responding, so I reminded him of my request.  Long story short, I still haven’t gotten a bit of information on the subject.  I have no way of knowing whether he’s hiding things from me, or simply knows nothing on the subject, and doesn’t know how to find out.  Either way, we have a problem.  I do know his daughter attends parochial school.  He told us so.

I checked the School Department website to see what I could find, and what little I did was in the “dog and pony show” category, or if you prefer, “entertaining the taxpayers.”  Useless if you are trying to get to the bottom of things.

Then I remembered that the State of Maine funds local schools to the 40-50% level of total budgets.  That’s a lot of money, and money from above never comes without strings attached.  How does one find out what those strings are?  Does a local authority agree to meet those obligations?  Are they reviewed with the local school board and the public?  I’ve never seen any evidence of that.  But here in Maine, there is a State Board of Education and a Commissioner of Education.  Why on earth would they exist if not to impose policy on the local school departments that operate the government schools?

Curious as usual, I decided to surf the Maine DOE website on the subject of curriculum.  It was not a productive effort, but what I did find only raised more and more questions, particularly as to regulations, mandates, and most of all, designated authority over the curriculum content our children are subjected to.

Add to this puzzle the fact that there is a Federal Department of Education, and that they parcel out abundant sums of money to the states that are designated for “public education” purposes.  Strings attached?  Oh, you betcha.  And the feds are much more into social and cultural engineering than state and local authorities.

For now, let’s just say that from what I’ve managed to learn so far, much as they don’t want me to learn it, you need to be afraid, very afraid.

There’s a bumper sticker that says, “if you aren’t afraid, you haven’t been paying attention.”  Recent very visible events in other states make it clear that nowhere near enough parents and interested parties have been paying attention in the past, but the numbers are growing like wildfire.

It is time this changes, and it begins with all of us working to inform ourselves and hold local, state, and federal authorities accountable, and provide full and open disclosure.  Add to that demanding that full and open competition in all things related to government schooling become the rule, rather than the exception.

I can see that the class is beginning to doze off, so as any good “Perfesser” would, I’ll leave these questions for “interested students.”  Written responses, if submitted, will be graded for extra credit consideration.

“If you do not take an interest in the affairs of your government, then you are doomed to live under the rule of fools”. – Plato