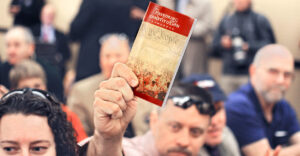 The website Politico recently ran a feature by two academic commentators who think constitutional amendments are on the horizon. They tell us:

“We’ve studied the history of the amendments to the U.S. Constitution and found that most of them come in waves after long periods of constitutional inaction. What’s more, those short bursts of activity typically have followed periods of deep division and gridlock like ours. In fact, history suggests that periods of extreme political polarization, when the normal channels of legal change are blocked off due to partisan gridlock and regional divides, can usher in periods of constitutional reform to get the political system functioning again.”

The authors are politically liberal, and they seem to anticipate amendments that centralize American governance further—by, for example, abolishing the Electoral College or granting Congress more authority over elections.

The authors are correct that new amendments may be imminent. But they are very wrong about the probable nature of those amendments. Far from authorizing more federal power, amendments almost certainly will reduce federal prerogatives and edge us toward decentralization.

Short-term political eddies slosh back and forth, but for more than three decades, the global tide has been toward more local control. One way to see this is to compare the map of the world in 1990 with that in 2022: What was once the Soviet Union has split into 15 separate nations. The territory of Yugoslavia has become, successively, five nations, then six, and now seven. The former Czechoslovakia is now two nations. So is the former Sudan.

Among countries remaining intact, political pressures have created more regional autonomy. Within Canada, the provinces have won wider prerogatives. Within the United Kingdom, Scotland and Wales have obtained their own Parliaments, and the entire country has withdrawn from the European Union. Even the communist Chinese bosses, recognizing the impossibility of directing a modern economy from the center, have permitted some free-market reforms.

This mega-trend toward decentralization is an astounding repudiation of the former academic consensus: For much of the 20th century, academic orthodoxy was that more social complexity requires more central control. Yet we have learned that the more complex life is, the more difficult it is to govern well from the center. An all-powerful elite may do some good in a place such as ancient Egypt—but not in a modern state.

For 150 years after the American Founding, the United States was the exemplar of local control: As I observed in a previous essay, before 1940 the federal government had little involvement in the daily lives of most people. Since 1940, however, the trend toward concentrating power in Washington, D.C. has been relentless.

The American trend has been astonishing for at least two reasons. First, it has bucked the global tide. Second, the practical results of centralization have been obviously dysfunctional to any impartial person who pays attention. For example, the bitter political divide among Americans is largely the result of centralized decision-making, which imposes uniform outcomes on the entire country, irrespective of local preferences and local needs.

This dysfunction shows up in opinion polls, which reveal that few Americans believe that Congress, the president, or the federal government are doing a good job. In an effort to enjoy the ever-shrinking zone of freedom, Americans are emigrating en masse from states and localities controlled by the Democratic Party to the growing supermajority of regions controlled by Republicans.

The Drive for Constitutional Amendments

Examining the number of current applications is a way to gauge support for amendments in general. As of today, there are applications from a clear majority of the states.

Moreover, because state lawmakers nearly always demand a convention limited to addressing specified problems, tallying the subjects addressed is a good way to ascertain the kind of amendments popular enough to be ratified. This examination is something the authors of the Politico article should have done, but did not.

What Kind of Amendments Are Popular?

Observe also that all of the first three categories necessarily would reduce federal prerogatives. A campaign finance reform amendment might increase congressional power (by giving Congress authority to pass a reform law), but it would not necessarily do so. But as we shall see, the mere possibility that a campaign finance amendment might give additional authority to Congress makes it the least popular of the four.

The Relative Popularity of Different Amendments

Now, let’s examine how the four have been performing in the state legislatures. Here’s a “snapshot” showing the current tally for each kind of application:

As you can see, over 92 percent of current applications call for amendments necessarily imposing more restrictions on federal functionaries.

When you go from a snapshot to a “motion picture,” you can see two distinct trends.

The first is that the campaign finance total is stalled. It topped out at five last year, but then the New Jersey legislature repealed its application, reducing the number to four. Even though campaign finance reform is very popular, very few state legislatures favor any measure that could increase congressional power.

The second trend is this: The Convention of States momentum has been growing at the expense of the much older movements for a BBA and congressional term limits.

The BBA total recently dropped to 26 from 27, and congressional term limits’ growth has been very slow. By contrast, the number of legislatures signing onto the wider CoS proposal has jumped to 19 from 15 just this year.

Both a balanced budget amendment and congressional term limits remain popular with the American people. However, the federal government has become so abusive, wasteful, and dysfunctional that many citizens no longer believe those proposals are sufficient. When the BBA and congressional term limits movements began decades ago, they looked like proportionate responses.

But now that the feds are approaching bankruptcy and the arrogance of the federal elite is greater than ever, people seek more comprehensive solutions. Many staunch BBA supporters, for example, have pivoted to supporting a much wider “fiscal responsibility amendment.”

What the Numbers Tell Us

Some liberals and leftists persist in promoting centralizing amendments, and some conservatives have worked themselves up into a lather about the possibility.

But it’s not going to happen. Few state legislatures support more centralization, and many support decentralization. If Congress were to propose a measure increasing federal power, there’s virtually no chance the states would ratify it. The more likely scenario—especially if the 2022 elections increase the Republican supermajority control of the state legislatures—is that a convention will propose amendments limiting federal power.

Robert G. Natelson, a former constitutional law professor who is senior fellow in constitutional jurisprudence at the Independence Institute in Denver, authored “The Original Constitution: What It Actually Said and Meant” (3rd ed., 2015) and “The Law of Article V” (2nd ed., 2020). He is the nation’s most published scholar on the constitutional amendment process, and has advised several groups favoring an amendments convention.