During this year’s Christmastime, there has been a lot of speculation about what Jesus would want us to do in regards to Covid-19 and getting the vaccination. CNN “religious commentator” Father Robert Beck recently said that Jesus would want people to get vaccinated, and that the unvaccinated should be segregated from the rest of society. It is best not to project what we think onto Jesus, because doing so would be taking his name in vain. So instead of projecting what Jesus would do, we should look at what Jesus actually did.

There was a pandemic during Jesus’ life on earth; it was called leprosy. Leprosy is a contagious disease which results in severe physical deformities, and eventually death. During Jesus’ time, lepers were secluded from society, they were outcast, just as Father Beck wants to do with those not vaccinated for Covid. If a leper, for whatever reason, had to come into town, he would have to scream, “Unclean! Unclean!” as he walked down the street to alert the people that a leper was in their midst, and to avoid them.

But Jesus tended to the lepers. He healed the lepers. He didn’t exclude them. He didn’t label them “unclean”. He didn’t segregate them from the rest of society the way Father Beck, Joe Biden, and many others have called for. Jesus came not to tend to the human body; he came to tend to the human soul. That is the part of us which Jesus believes is the most important, because it is the one eternal part of our being. The human flesh will wither and die, and disintegrate into dust, but the soul lives on forever. The lepers’ souls were just as valuable to Jesus as any other person’s soul with a healthy and “clean” body.

Jesus wanted to integrate the lepers back into society, while Father Beck wants to segregate certain people from society. Jesus taught about the importance of the community of people, saying, “For where two or more gather in my name, there am I with them.” – (Matthew 18:20) By calling for certain people with whom they disagree isolated from society, Father Beck and many others are denying them their communion with God. 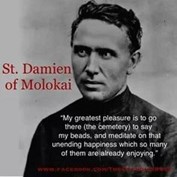 Last year, Alexandra Ocasio-Cortez called for the removal of a statue of a priest, Father Damien, from the United States Capital building, calling him, a “White Supremacist” because he did missionary work in Hawaii. Ironically, Father Damien’s work in Hawaii was living in a leper commune.  He cared for the lepers. He tended to their physical wounds, and eventually died a painful death with them at aged 49. Father Damien understood the importance of that communion. He was there tending to their souls, as much as their bodies. He was doing the work that Jesus did on earth.

Like CNN’s so-called “religious” commentator, AOC made her judgement of Father Damien based solely on his physical being, and did not take into account his work. All she saw was the color of his skin and immediately assumed he was a white supremacist because she judges people based solely on their physical form – their skin color. She doesn’t care to see the person’s soul. In her eyes, the priest who cared for lepers, and actually died from leprosy is evil solely because he is white.

That is why racism and sexism, and this type of discrimination are so harmful. Judging people based on a physical trait separates them from the most important part of their being, their souls. As Apostle Paul said, “There is neither Jew nor Greek, there is neither slave nor free, there is no male and female, for you are all one in Christ Jesus.” – (Galatians 3:28)

If Father Damien thought like Father Beck, he would have kept himself separate from the lepers, and not have missioned in Hawaii, and maybe their souls would not have been saved, but AOC would not have called him a white supremacist either. These are the eventual paths that you end up going down when you define your world based solely on the physical, your material existence, and as we have seen too often these days, good becomes evil, and evil becomes good.

Jesus did talk about segregating people – separating the wheat from the chaff, and the sheep from the goat. He was metaphorically speaking about judgment day, but that segregation will not be based on a physical trait, not on a deformity, or a sickness, or even choosing not to get vaccinated. The separation that day will be based on each individual’s soul, who they are beyond their physical person. And that soul is what we should be tending to, because beyond the physical form into which we were born, beyond how healthy or ill our bodies are, beyond how we look, or how strong we are, the soul is the most important thing we possess, and it is where there is true equality. There is a vaccination against the evil that is taking over the world, and that protection comes not from investing in our temporary bodies, but investing in our eternal souls, and we should never sacrifice our souls to protect our bodies.

Objectivity is the Objective