Return To Sender: Not Enough Postage

Return To Sender: Not Enough Postage

The Status of Unreceived Article V-Related Resolutions –
By Gregory Watson*
As we enter the new year of 2021, at least eleven already-adopted Article V convention-related resolutions still have not reached the US Senate and, in the specific case of Nebraska’s 2010 resolution (from more than 10 years ago), that particular resolution still has not been received by either of the two chambers of Congress.

Several states have been rather derelict in transmitting Article V-related resolutions to Federal lawmakers in Washington, DC.  As of January 1, 2021, here is where things still stand:
Based on public record and going back only to 2010, the following 7 state-adopted Article V convention application resolutions have either (a) not been received by either chamber of Congress, or (b) been received by only one of the two houses of Congress:

1. Nebraska’s 2010 Legislative Resolution No. 538, by former State Senator Pete Pirsch, still has not been received by either of the two houses of Congress, and has now surpassed its 10th anniversary;

2. North Dakota’s 2011 House Concurrent Resolution No. 3048, by former North Dakota State Representative Blair Thoreson, has still failed to reach the US Senate, yet it somehow managed to find its way – in duplicate, no less – to the US House of Representatives on May 31st [Congressional Record, at page H3805] and again on June 1st [Congressional Record, at pages H3869 and H3910] of the year 2011;

3. Utah’s 2015 House Joint Resolution No. 7, by former Utah State Representative Kraig Powell, while received by the US House on July 15, 2015 (Congressional Record, at page H5237) still has not arrived in the US Senate;

6. Wyoming’s 2017 House Enrolled Joint Resolution No. 2, by still-serving Wyoming State Representative Tyler Lindholm, still eludes the US Senate.  This is likely due to the curious belief on the part of the Wyoming Secretary of State’s Office in 2017 that it was perfectly OK to just casually email to Vice-President Mike Pence (as the formal presiding officer of the US Senate) rather than to transmit an official paper copy to Pence.  Meanwhile, the US House received a copy of the Resolution back on April 3, 2017 (Congressional Record, at page H2629); and

7. Utah’s 2019 Senate Joint Resolution No. 9, by still-serving Utah State Senator Evan J. Vickers, while received by the US House on July 23, 2019 (Congressional Record, at page H7242) has still not arrived in the US Senate. 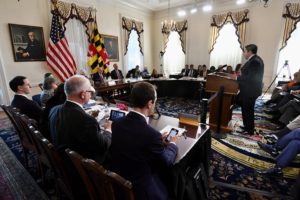 The Constitution does not set forth how Article V applications are to be transmitted.  However history has made clear how it should be done.  Learn The Proper Way to Transmit State-Approved Article V Applications to Congress in this Caucus-provided article… HERE.

*About the author:  With his decade of work (1982-1992) to gain the 27th Amendment’s incorporation into the US Constitution, Gregory Watson of Texas is an internationally-recognized authority on the process by which the Federal Constitution is amended.