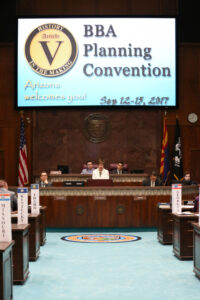 In 1979 – amid soaring inflation – well over the required two-thirds of states called for a balanced budget amendment. With prices again rising sharply, Rep. Jodey Arrington, R-Texas, is set to introduce a measure on Tuesday requiring Congress fulfill an obligation in calling a convention of the states.

The resolution says, “beginning in 1979, when Congress appears to have failed in its constitutional duty to count applications and call a ‘convention for proposing amendments’, the nation’s debt has increased to more than $30 trillion from $830 billion while the value of the dollar has declined by over 70 percent.”

By that year, 39 states had approved measures calling for a convention of the states, or an Article V convention. That is more than two-thirds, or 32 states, required. However, Congress took no action. Since that time, five other states have passed similar measures calling for an amendment to either balance the federal budget or control federal spending to a certain rate of the economy.

“With the current leadership in the House, I don’t expect it to go anywhere this session, but we are hopeful for next session,” David M. Walker, former U.S. comptroller general under Presidents Clinton and George W. Bush, told Fox News Digital. “If Congress just sits on it well into next session, I think it’s very likely that one or more states will bring a mandamus case that would ultimately go to the Supreme Court and force them to do something.”

Article V provides two avenues for amending the Constitution, one is through a super majority in Congress. The other is that Congress, “on the application of the legislatures of two thirds of the several states, shall call a Convention for proposing Amendment.”  All previous constitutional amendments were passed through a two-thirds vote in Congress.

As comptroller general, Walker ran the Government Accountability Office, a federal watchdog agency that monitors waste and fraud. Walker, now an advocate with the Let Us Vote for a Balanced Budget Amendment Citizen’s Campaign, said, “the time has come to defuse our ticking debt bomb.”

“We can give Congress the benefit of the doubt and say nobody was keeping score and nobody was making a record, so maybe they didn’t know,” Walker said of Congress ignoring its obligation. “At the same point, we know they don’t want this to happen.”

Walker stressed this could not lead to a “runaway” convention where delegates would make radical changes to the Constitution. That is because 32 of the 40 states filed single issue amendment applications on federal spending for a constitutional convention. Also, whether Congress or a convention votes to amend the Constitution, 38 states—or three-quarters of the states—would still have to ratify the proposed amendment.

Since the Constitution says Congress “shall” call a convention if two-thirds of the states call for it, this should be a mandatory, non-discretionary, and ministerial duty of the Congress, said David Biddulph, co-founder of the Let Us Vote for a Balanced Budget Amendment Citizen’s Campaign, Inc.

“I was a portfolio manager in the 1970s and the mood in America was awful, and we are right back where we were, and it really strikes me as tragic for our country, that we are repeating the mistakes of the 70s in our current times because Congress didn’t do its job in calling convention to propose a fiscal responsibility amendment in 1979,” Biddulph told Fox News Digital.

“America today is feeling the decline in prosperity of families because of inflation at 9%,” Biddulph added. “The really incredibly good news is that our founders put in a mechanism to bypass Congress’s failure to address issues important to the American people such as inflation that is reducing our standard of living.”