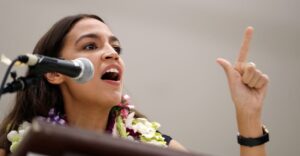 Democrats’ calls for defiance and mob violence against the Supreme Court are not based on legal arguments but outcomes they dislike.

The U.S. Supreme Court ended its most consequential term in recent memory last month, and conservatives across the country are still celebrating its historic rulings protecting life, religious liberty, the Second Amendment, and more.

But the truth is, these decisions weren’t simply victories for conservatives. They were victories for the Constitution, which is what makes the progressive left’s unhinged response to Dobbs v. Jackson, Carson v. Makin, and New York State Rifle & Pistol Association v. Bruen all the more revealing.

“To hell with the Supreme Court. We will defy them,” declared Rep. Maxine Waters, D-Calif., immediately following the Dobbs decision. Her colleague Rep. Alexandria Ocasio-Cortez, D-N.Y., went even further. She called the ruling “illegitimate” and told protesters, “We have to fill the streets. Right now, elections are not enough.”

Keep in mind, Waters and Ocasio-Cortez are sitting members of Congress whose party habitually lectures you about “democracy” and the sanctity of American institutions. Yet they’re now openly calling for defiance and anti-democratic mob justice against one of the country’s core institutions. Insurrection vibes, anyone?

This past weekend, a left-wing activist group began offering bounties for the locations of Supreme Court justices who voted to overturn Roe v. Wade. Some affiliated with the organization targeted Justice Brett Kavanaugh while he dined at a Washington, D.C. steakhouse last week. Ocasio-Cortez mocked the incident on Twitter.

What exactly is going on here and why is the left so upset? A recent editorial in The Wall Street Journal perfectly diagnosed what’s afflicting progressives:

“The fury of the left’s reaction isn’t merely about guns and abortion. It reflects their grief at having lost the Court as the vehicle for achieving policy goals they can’t get through legislatures. The cultural victories they achieved by judicial fiat will now have to be won by persuading voters.”

In other words, Ocasio-Cortez isn’t upset with the court’s stance on the legal doctrine of stare decisis or even its interpretation of substantive due process. Given her public statements, it’s doubtful she’s even read Dobbs. What she’s upset about — what so many like her are upset about — is the idea of living with an outcome she dislikes.

This remarkably dishonest NBC opinion article, titled “The Supreme Court’s originalism is white supremacy,” attempts to justify the left’s outrage at the high court by claiming “originalist judges express a belief that we should interpret the U.S. Constitution according to the legal opinions of 18th century white men.”

Now, at this point, it’s worth pausing for a moment to ask: Since when do decent people speak this way, and how exactly do overt racial attacks on long-dead Americans pass for enlightened political thought?

As many have already pointed out, the court’s decision in Dobbs doesn’t condemn Americans today to the writings of white men in 1787. On the contrary, it returns the contentious issue of when life begins to 50 different states — 50 different laboratories of democracy wherein voters can have their say through their elected representatives. This prospect terrifies Democrats, who know their ideas are wildly unpopular.

According to a poll by Harvard’s Center for American Political Studies, 72 percent of Americans support some restrictions on abortion after 15 weeks. A Fox News poll from early May also found majority support for banning abortions after 15 weeks. Of course, this was the same timeframe in the supposedly controversial Mississippi law that ultimately led to the overturning of Roe.

But Dobbs isn’t the only decision progressives seem incapable of parsing. In the aftermath of the court ruling that Maine cannot exclude private religious schools from receiving funds from a state tuition assistance program, leftist Wajahat Ali thoroughly beclowned himself by claiming the 6-3 ruling was part of a “white Christian nationalist project” and that it wouldn’t apply to private Islamic or Jewish schools.

In fact — as National Review’s Charles C. W. Cooke so delightfully pointed out — both the Council of Islamic Schools in North America and the Union of Orthodox Jewish Congregations of America filed an amicus brief in support of the petitioners.

Ali clearly didn’t bother to read the opinion, but the court held: “A neutral benefit program in which public funds flow to religious organizations through the independent choices of private benefit recipients does not offend the Establishment Clause.” This most certainly applies to Islamic and Jewish schools too. Claiming otherwise is nothing short of an outright lie meant to sow racial division and delegitimize the high court.

After years of residing in safe spaces and relying on dutiful allies in the corporate media and big tech to silence their political opposition, the left is wholly ill-equipped to engage in debate and persuade their fellow Americans. That’s why they are chasing justices out of restaurants and calling anyone who disagrees with them a racist. Unfortunately for them, it won’t work.

Kiyan Kassam is a conservative writer and journalist based in Vancouver. Follow him on Twitter at @kiyankassam.