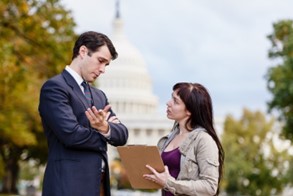 The good news from the latest America’s Values Study undertaken by the Cultural Research Center at Arizona Christian University is that nearly all of the nearly 4,000 citizens polled not only think that inflation is going to influence greatly how they vote on November 8, but that their vote will likely reflect their belief that the Democrats are primarily responsible for it.

The bad news is that more and more of those 4,000 are looking to government and not to God for help.

Six in ten of those polled say that inflation, the rising cost of living, food prices and shortages, and oil and gasoline prices will influence how they vote in the midterm elections by “a lot.”

Many of the most influential issues in this election are those that highlight publicly perceived failures by the Democrats. The highest-impact issues — specifically, inflation, the cost of food and related shortages, and policies and prices related to gas and oil — all highlight turns for the worse over the past two years, when Democrats have held the White House and both chambers of Congress.

If historical patterns hold true, voters will hold Democrats responsible for those failures. Some four out of five incumbents in the U.S. House and Senate are typically re-elected.

However, there may yet be substantial change in the two federal legislative bodies given the confluence of anger with the condition of America, the historical tendency to replace the prevailing party in mid-term elections, the unusually large number of incumbents not seeking re-election, and the fact that the issues of greatest importance to voters underscore public dissatisfaction with Democrat rule.

But when it comes to issues like morality, the right to life, and the threats to religious liberty by the government, those polled scarcely mentioned them at all. As Barna noted,

Even among the most deeply religious Americans, regardless of their faith of choice, a greater emphasis was placed upon the personal impact of governance choices and public policies. That focus on self, to the exclusion of the community, is a reflection of their syncretistic worldview and the decline of spiritual commitment in America.

Barna holds that that “syncretistic” view held by most Americans — including those who call themselves Christians — is made up from a vast buffet-like array of religious positions rather than the singular Christian faith that informed the Founders of the nation.

Religious segments such as born-again Christians and people who regularly attend evangelical churches did not include issues such as abortion, national morals and values, [or] religious freedom in their top-five lists [of influences].

Lindsey Jensen, a brand ambassador for Turning Point USA, noted the trend away from traditional Christianity two years ago:

Without the belief in God or the natural rights given to us by God, the Constitution wouldn’t exist nor could it be upheld….

As Christianity declines, we see that more people in our nation look favorably on the idea of more government involvement. Instead of turning to God or the church, they want the government to solve their problems.

She notes the primary problem — people who call themselves Christians don’t act like it:

Our nation is feeling the repercussions of Christians who “check the box” and attend church but don’t actually want the Word of God to inform their daily life and change the way they live.

Our nation needs the kind of people that reflect Christ in all they do.

This is precisely the point made by America’s 30th president, Calvin Coolidge:

The foundations of our society and our government rest so much on the teachings of the Bible that it would be difficult to support them if faith in these teachings would cease to be practically universal in our country.

The good news is that there is likely to be substantial change in Washington following the midterm elections. The bad news is that the necessary cultural shift away from secularism and the “weak Gospel” toward rebuilding a culture based upon historical Biblical Christianity, self-reliance, and individual responsibility remains elusive.

Bob Adelmann: An Ivy League graduate and former investment advisor, Bob is a regular contributor to The New American, writing primarily on economics and politics. He can be reached at badelmann@thenewamerican.com.