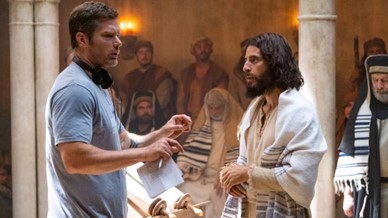 The Federalist visited ‘The Chosen’ to talk with the cast and crew as they wrapped the filming of season three, and it was like stepping back in time.

MIDLOTHIAN, TEXAS — While “The Chosen” isn’t a miracle quite like Jesus’ feeding of the 5,000, this Gospel-based series continues to turn limited resources into a sensation. As its third season approaches on Nov. 18, “The Chosen” is the most successful multi-season, crowd-funded show of all time.

“The Chosen” chronicles Jesus’ ministry in a deeply intimate and human light. The show’s underdog success story is a credit to the way crowdfunding freed it from the pressures of secular outside studios and networks.

“Come to me, all you who are weary and heavy-laden, and I will give you rest,” Jenkins told The Federalist. “The honeymoon phase is over, now the characters all have to deal with the costs and occasional confusions of following the Messiah.”

Jenkins’ approach to the most important story of all time is what sets “The Chosen” apart from previous retellings of the story.

“From my childhood when I was in church hearing the stories, I always was trying to think about what was happening in between the verses,” said Jenkins. “What was it like Jesus sitting around the campfire with his disciples, Jesus growing up? Some of these people I read about in the Gospels, their stories were so quick. I was always interested in some of the smaller things we don’t necessarily see in the Gospels. Whenever I thought about those things, it made those Gospel moments even more powerful.”

Season three of “The Chosen” will see the apostles facing the difficulties that come with following the radical Messiah.

The Federalist visited “The Chosen” to talk with the cast and crew as they were wrapping filming of season three at the show’s new set in Midlothian, Texas. Located at The Salvation Army’s Camp Hoblitzell, “The Chosen ” finds the 1,200-acre camp the perfect location to bring to life these biblical narratives. The show took a multi-year lease of 900 acres of the camp during Covid when almost all other filming sites shut down. This allowed for the series to keep filming while also helping keep the camp operational.

Art director Jeff Staebler and production designer James C. Cunningham have playfully dubbed their on-site set “Faux-pernaum,” a play on the biblically significant village Capernaum. The set serves as the primary location for the filming of most scenes in “The Chosen.”

Despite being dubbed “Faux-pernaum,” the set serves as the location for filming scenes in most all Galilean cities. No detail was too small for Staebler and Cunningham’s set, including first-century graffiti taken from real Pompeii walls. Hidden bible verses are scribbled across the set from cast and crew members. Aside from being incredibly detailed, the set is also versatile. The front porch of one apostle’s home doubles as the interior of another’s dwellings. Standardized measurements for doors allow for the same building to be used for multiple different locations. In total, there are nearly 80 different set possibilities out of a handful of buildings.

Attention to detail does not stop with the set design, as the costume department works tirelessly to create hundreds of authentic first-century costumes.

The cast of “The Chosen” breathes new life into characters who’ve been retold time and time again. Venerated as saints and examples to live by, the apostles we see in the show are people who make mistakes, struggle with vices, and face conflicts for following their faith.

Jordan Ross, who plays Little James, draws upon his own background to represent people with disabilities in a way never seen before in a biblical retelling.

“Dallas Jenkins decided to embrace my limp, my cerebral palsy, and my scoliosis, and decided to make it part of my character,” said Ross. “I think that was such a powerful and important move because not everyone gets healed — at least not in the way they think they should — and it just added to the diversity of this project, and I think that diversity has crossed over into our fanbase as well.”

What’s even more unique about the cast is the diversity of their faith backgrounds. Ranging from devout Catholic to spiritual non-believer, each actor brings different motivations and meaning to their characters’ actions. This brings an element of relatability and truth to the series that transcends denominations. Much of the cast believes that aside from its biblical context, “The Chosen” is as much historical drama as anything else.

“People are starting to see what it looks like when the rubber meets the road,” said Tyler Thompson, co-writer of the show along with Ryan Swanson. “I think people who follow Jesus today even know that once they start that path it doesn’t mean it’s all sunshine. There are trials and tests, and our characters are put through a lot of trials and tests, and we get to watch them overcome those.

The chemistry between the cast members is the lifeblood of “The Chosen,” and their off-screen relationships translate beautifully on screen to show a family of misfits brought together by Christ.

“There really is a family element to this whole project,” said Yoshi Barrigas, the actor who plays Phillip. “There’s just a lot of support, a lot of love, and these are people that are going to be part of my life forever, so we’re very fortunate.”

“The thing I endeavor to do when approaching the role of Jesus is I try to be a mirror of what God wants people to see when they watch the show and not try to bring any of my personal stuff to it that would detract from the experience of that,” said Roumie. “I’m excited that people are feeling so connected to Jesus as a result of it.” 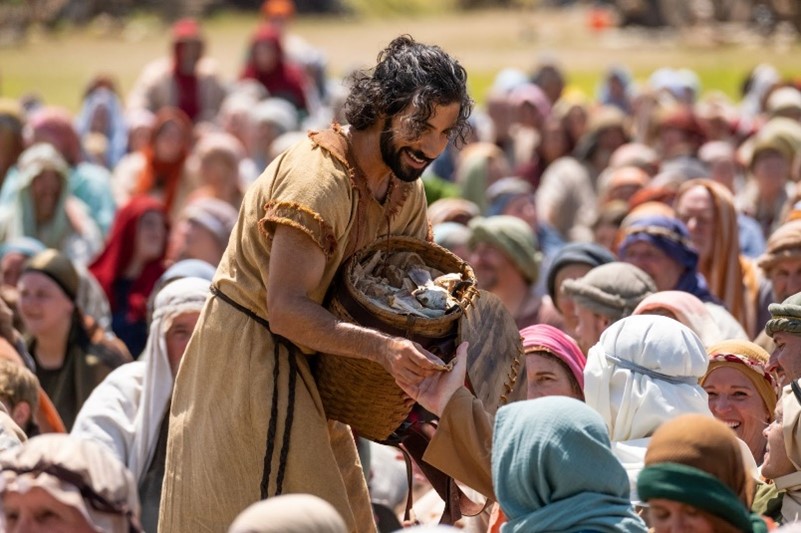 Among the iconic scenes to look forward to in season three of “The Chosen” is the feeding of the 5,000, in which Jesus performs a miracle to feed a crowd of 5,000 out of five loaves and two fish. The “Chosen” team had a unique task at hand in creating this scene that seems impossible to imagine by just reading that passage in the Gospel. In order to recreate the crowd, an open call was promoted for dedicated fans of the show to be part of the program they’ve supported for years.

“The heat, the responsibility for giving a good experience to thousands of people, the complexity and size of the scenes … overwhelming,” said Jenkins. “But I have hope the final product will bear fruit. It’s going to be quite a season finale!”

Jenkins also says season three is no longer a season to show Jesus’ “miracle of the week”; it deals with much darker themes. Jesus’ disciples will face backlash and negative consequences for following the Messiah. The unique part about this season, however, is that in watching these beloved characters, the rewards of their actions will be that much sweeter for viewers to witness, according to Jenkins. Facing adversity due to following their faith is something that many viewers, Christian or not, will be able to relate to.

Viewers can also look forward to seeing the apostles interact one-on-one, a look into the unique female experience of following Jesus during his ministry, new prominent characters, and more scenes of Jesus’ incredible miracles.

“We’re in this for the long haul, and we take our time to connect the viewer to those who encounter Jesus,” said Jenkins. “I believe there are more scenes than ever this year that viewers will watch and respond with, ‘That’s me.’”

The honest and impassioned approach “The Chosen” continues to bring elevates the show above the corny Christian media that have turned people off from watching biblical shows and movies. It is not “Veggie Tales” for adults, but rather an honest, intimate, and human representation of what it means to follow Christ.

People interested in catching up on “The Chosen” before the release of season three can watch the show for free by downloading “The Chosen” app. “The Chosen” is also available to stream on Amazon Prime and is coming to other streaming services soon.

Elise McCue is a former intern at The Federalist and student majoring in multimedia journalism and professional and technical writing. She also reports on the Southwest Virginia music scene for The Roanoke Times. You can follow her on twitter @elisemccue or contact her at mccueelise@gmail.com