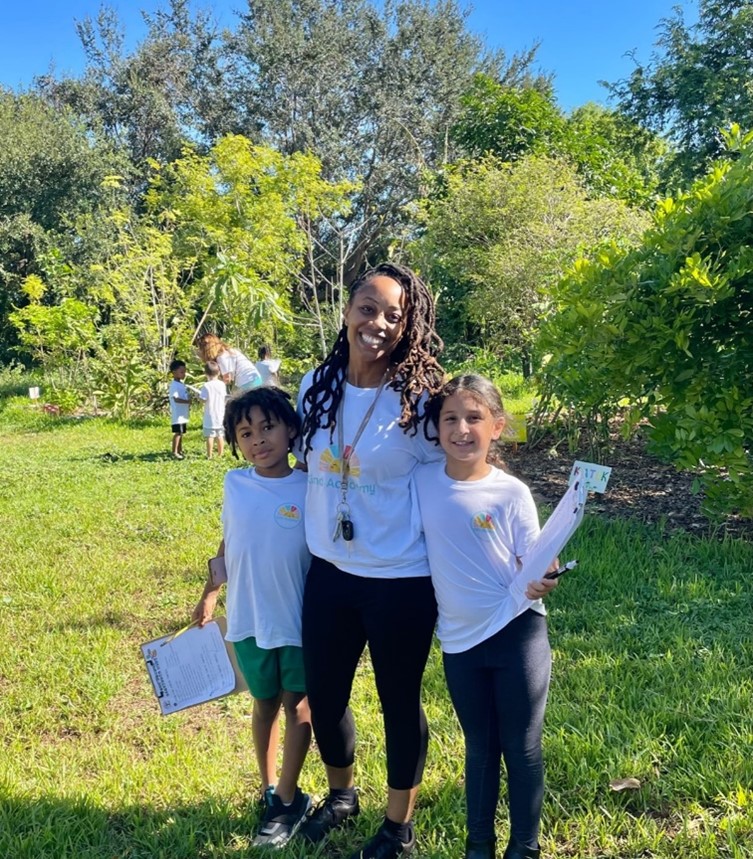 “Mom, I can’t do it anymore,” said Iman Alleyne’s four-year-old son about his pre-kindergarten program. Plagued by anxiety-induced stomach aches and daily crying episodes over going to school, Alleyne’s son was sending clear signals that he needed a different learning environment.

At the same time, Alleyne was also feeling dissatisfied in her job as a certified special education teacher and school counselor in a Florida public charter school. She saw kids being bullied by other students, as well as being yelled at by teachers. Dismayed but determined, Alleyne began plotting what would eventually become Kind Academy, an award-winning microschool, or small, mixed-aged, co-learning community, in Coral Springs, Florida.

Centered around kindness to oneself, others and the world, Kind Academy officially began in 2016 as a two-day a week, drop-off program for homeschoolers, including her son, that blended academics and nature-based learning.

Working with Suarez helped Alleyne to imagine what was possible for her fledgling microschool, and earlier this year she moved Kind Academy from a mostly nomadic program to a dedicated location that would also offer school choice scholarship eligibility. Today, Kind Academy serves 25 students in kindergarten through sixth grade, with four teachers in addition to Alleyne.

She’s only just getting started. “My dream is 100 schools in 10 years,” said Alleyne, who hopes to scale her microschool network nationwide.

Her vision may be realized sooner than later.

Her friend and fellow Florida microschool founder, Shiren Rattigan of Colossal Academy, was also acknowledged as a Yass Prize quarter-finalist and recently joined Alleyne in New York City for a gathering of Yass-recognized entrepreneurs.

Both entrepreneurs heard about the Yass Prize through the VELA Education Fund, a non-profit, philanthropic organization that provides microgrants to microschool founders and others who are building and scaling non-traditional learning models.

Alleyne and Rattigan are just two of the many education entrepreneurs in South Florida who are VELA grantees working, often closely and collaboratively, to create and expand learning opportunities for local families.

“There’s something happening here,” said Rattigan about her local cluster of microschools and schooling alternatives. “It’s so great to be in alliance with these incredible entrepreneurs.”

A former teacher in the Chicago Public Schools, as well as in private schools, Rattigan’s microschool emerged out of a Montessori-inspired “pandemic pod” that she began in 2020 with a few families in her community. While running her pod, she connected with another local entrepreneur, Toni Frallicciardi, who, along with her husband Uli, runs Surf Skate Science, a homeschool collaborative that now serves almost 250 students in South Florida. From them, Rattigan realized how much potential there was to grow her microschool to serve more families, while collaborating with other local education entrepreneurs in various ways.

Rattigan’s microschool now enrolls 30 part-time and full-time students, in addition to about 20 after school students. Many of Rattigan’s students also attend her microschool at little to no cost due to the state’s scholarship school choice programs.

“There’s a real, deep connection that we have with each other in order to make sure we are all doing well and understand that we’re not in competition with each other, that there are so many people to be served,” said Rattigan.

Recently, Rattigan and Frallicciardis hosted a gathering at Colossal Academy for more than 30 local microschool founders and entrepreneurs.

“There’s something really special about meeting other educators who are entrepreneurs. We can feel inspired, feel connection, feel community so that we can go do the work we have to do,” said Rattigan.

Alleyne of Kind Academy agrees. “I started learning about all these other people who were doing amazing things, and we got connected with them, and started meeting up. It was the community that I always wanted but didn’t know I needed,” she said, adding that the VELA grant organization really helped to activate the local founder community.

Supported by this community, and now with additional grant funding from the Yass Prize, Alleyne is ready to tackle her big dream of building a sweeping Kind Academy microschool network.

“I want to be up there with Acton and Wildflower,” she said, referencing two other thriving microschool networks that launched in 2010 and 2014, respectively.

“Why do I want to scale so bad?” she asks. “As many children as possible should have access to something like this. It has to be an option. I want them to have opportunities to feel loved, valued, smart, capable and that they can do what they enjoy. They need it.”

True entrepreneurs, Alleyne and the other microschool founders in her local cohort recognize this need and are building innovative, life-changing education solutions for families in Florida and beyond.

Kerry McDonald is a Senior Education Fellow at FEE and host of the weekly LiberatED podcast. She is also the author of Unschooled: Raising Curious, Well-Educated Children Outside the Conventional Classroom (Chicago Review Press, 2019), an adjunct scholar at the Cato Institute, education policy fellow at State Policy Network, and a regular Forbes contributor. Kerry has a B.A. in economics from Bowdoin College and an M.Ed. in education policy from Harvard University. She lives in Cambridge, Massachusetts with her husband and four children. You can sign up for her weekly email newsletter here.