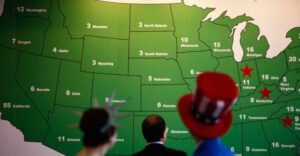 The left is at it again, and conservatives need to be on high alert. The left has been pushing for a national popular vote to elect the president of the United States for years. Since 2017, 10 more states have either signed the National Popular Vote bill into law or approved the bill in one state legislative chamber. This should be a grave concern because it directly undermines the electoral system established by our Constitution. If not stopped, the American system of presidential elections will be changed potentially forever.

The National Popular Vote bill would guarantee the presidency to the candidate who receives the most popular votes in all 50 states and the District of Columbia. It has been enacted by 15 state legislatures plus Washington, D.C., and passed in 41 legislative chambers in 24 states. For the proposal to become the law of the land, enough states totaling at least 270 electoral votes would be required to enact the law, and states would then commit their electoral votes to the candidate with the most popular votes nationally, regardless of which candidate won at the state level.

Democrats have long been unhappy with the electoral process, unless, of course, their candidate won. When their candidate loses, debate begins anew about how unfair the Electoral College is. The argument is always the same. Since we conduct our elections by democratic process, it makes sense to elect our nation’s executive according to the will of the majority with a voting plurality.

The commonly heard sentiment during election cycles is “every vote matters.” However, what is not fair is that if the president is elected based on a plurality, then the minority would not have a chance of having their candidate elected. Only the concerns and interests of more heavily populated areas, such as the East and West coast cities, would be represented. Interests of the minority and less populated areas would naturally be set aside and of little interest to future presidential candidates. Worse, the executive would be beholden and accountable solely to the majority.

This condition was not the intent of our founders. Their intent was to ensure that the nation’s highest executive, as well as the executive branch, represented the interests of all Americans regardless of political affiliation. A future president would need to appeal to those concerned about not just national but also regional issues.

Further, the Electoral College provided a means to disburse and decentralize power. State electors are elected just days before and are unknown until just prior to an election to prevent undue influence to stay true to the people’s votes in their states. Our founders framed it so as to prevent collusion and cabalist (their word) behavior, preclude violence, and thwart involvement of foreign powers.

Following the 2020 election, our founders’ concerns came to light and fruition. Our national elections have been fraught with cabalist behavior, undue influence, numerous forms of cheating, as well as foreign interference. The tyranny they feared came to pass, driven by collusion among the administrative state, the legislative branch, legacy media, Big Tech, and nongovernmental organizations. An independent executive branch separate from the legislature has become an illusion.

In Federalist Paper 68, Alexander Hamilton wrote, “the process of election affords a moral certainty, that the office of the president will never fall with a lot of any man who is not in an eminent degree endowed with requisite qualifications. Talents for low intrigue and a little arts of popularity may alone suffice to elevate a man to the first owners of a single state, but it will require other talents, and a different kind of merit to establish him in the esteem and confidence of the whole union.” Hamilton would have been appalled today to have witnessed the travesty undermining his sentiment.

So why does all this matter?

It matters because the idea of a national popular vote is gaining steam and if adopted by enough states, the Electoral College will become irrelevant. Minority voter interests will no longer matter at the national level. Only the whims of the majority will. And the result will be precisely why Socrates opposed a democratic form of government. Once a majority is established, it finds a way to remain permanent, and the majority class will become oppressive to the minority class. There will be no means to overturn the majority, no matter how skewed the majority’s view may be.

The implications for the country are vast and would make the United States just another oppressive tyrannical state. The ultimate reason for the success of the U.S. was that its founders held a belief that we are created and guided by a higher power, and they recognized that men are inherently corruptible. They implemented controls to prevent those with ambitions from achieving outright power over the minority, thus making the U.S. unique among nations.

Left Looks to Crush the Right

The left’s tactics are in high gear, accelerating in an attempt to overwhelm conservatives and Republicans to a tipping point at which the left acquires complete control and the right becomes powerless.

The left’s all-out assault has become abundantly clear since President Joe Biden took office. As soon as Democrats attained the presidency and the narrowest of majorities in the House and Senate, they pressed forward with their agenda, nearly unimpeded had it not been for the likes of Sen. Joe Manchin, D-W.Va., and Sen. Kyrsten Sinema, D-Ariz., and perhaps divine intervention.

Whether changing voting laws in its favor, creating crises to circumvent the laws already in place, continually flooding the courts with litigation designed to throw sand in the gears of transparent elections, or changing the electoral process altogether, the left’s efforts to gain and retain control, by any means necessary, will not relent.

In addition to ongoing election integrity efforts across the nation, it is imperative that conservatives push back attempts to advance a national popular vote. It is incumbent upon individual citizens to tell their state representatives that it is not the desire of the people to circumvent the constitutional process for electing our president.

Failure to stop a national popular vote could take generations to reverse.

Andrew Morgan is a former deputy assistant secretary of the Army, a senior executive within the Office of the Secretary of Defense, and a retired U.S. Navy captain. He received his MBA from George Washington University and master’s from National Defense University.