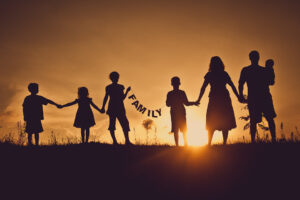 The Institutional Breakdown Behind Gun Violence

Too many of our nation’s young men use guns for evil. One knee-jerk response is to restrict gun ownership. But this solution ignores the most important question: What drives these young men to murder?

I’m personally all for trying to keep guns away from people with criminal records, mental illness, and histories of making violent threats. But the motives matter more than the means since a motivated person can adopt many different methods.

A review of the backgrounds of “lone wolf” shooters reveals similar pathologies. About half grew up without fathers and some without mothers. Over half had histories of mental illness. Some had criminal records. Most were bullied in schools that refused to enforce discipline. Most were socially isolated—isolation made worse by COVID and COVID lockdowns. Most spent much of their time playing violent video games and interacting online with other disaffected young men. Given all this, it’s not hard to understand why they were angry and why they decided to wreak vengeance on the world. They are the products of a decades-long assault on the nation’s institutions: families, schools, religion, and culture. (This is offered as an explanation, not a justification. Nothing can excuse the evil they did.)

Since at least Robert Owen (1771-1858), many socialists have opposed the nuclear family. Marx and Engels called for the abolition of the family because they believed it to be the foundation of the capitalist system. Some on the left continue to oppose the family based on this belief.

In addition to those who condemn the family because of its supposed link to capitalism, some feminists claim that the family is an oppressive, patriarchal social construct designed to cement the status quo in place. And these aren’t just a few nutcases to whom no one listens. Sophie Lewis, for example, author of Abolish the Family (due out in October), is regularly featured in The New York Times and The Nation.

In the United States, family breakdown began in earnest when the “War on Poverty” institutionalized the war on families. Welfare laws not only created incentives for fathers to leave their families, welfare workers demanded that they leave. From the paper Family Breakdown and America’s Welfare System:

In the words of Harvard’s Paul Peterson, ‘some programs actively discouraged marriage,’ because ‘welfare assistance went to mothers so long as no male was boarding in the household… Marriage to an employed male, even one earning the minimum wage, placed at risk a mother’s economic well-being.’ Infamous ‘man in the house’ rules meant that welfare workers would randomly appear in homes to check and see if the mother was accurately reporting her family-status.

Even though the Supreme Court (King v. Smith) struck down “man-in-the-house“ rules in 1968, welfare policies still discourage marriage. (The Court found that the man in question did not support the mother’s children nor was he under legal obligation to do so. Its ruling means that Welfare restrictions apply only to fathers and not to “substitute fathers.”) Until 2018, federal income tax laws also penalized marriage, and the income tax laws of fifteen states still do.

Family destruction has come at a great cost. Well over half of the young men in our prisons today grew up without fathers. Kids from homes without dads are far more likely than their peers to live in poverty, drop out of school, become addicted to drugs or alcohol, commit rape, be unemployed, become homeless, and commit suicide.

The woke left further stokes anger in our youth by teaching them that they were born into a Western culture that is responsible for all the world’s ills, and that their skin color dictates that they are either oppressors or oppressed. Young men today quickly learn that their masculinity is “toxic.” White children are labelled “oppressors,” and young white men are told that – by virtue of their sex and skin color – they are responsible for the world’s long history of slavery, colonialism, racism, and, more recently, global warming.

Minority children are labeled “victims” and told that the deck is so stacked against them that they are incapable of improving their lives and those of their families through their own actions. They are told that they will be able to advance only after white people have perfected themselves and have abolished their whiteness, their privilege, and perhaps even themselves.

All these accusations are calculated to foment rage, and all are false. Slavery has existed for countless millennia in every part of the globe and still widely exists in (nonwestern) nations such as India, China, North Korea, Nigeria, Iran, Indonesia, Congo, Russia, Philippines, and Afghanistan.

Conquest has likewise existed throughout history and on every continent save Antarctica. Wikipedia’s list of empires, which it describes as “incomplete,” tallies some 264, starting with Sumer circa 4500 BC. Today’s growing empires are China, Russia, and Iran – hardly western, capitalist nations.

Tribal prejudice isn’t unique to the West or to white people; it’s as old as humanity.

Nor are carbon emissions restricted to Western, capitalist countries. China’s carbon footprint, for example, exceeds that of all other developed countries combined, and the Chinese are currently building many more coal-fired power plants.

While there are advantages to belonging to the majority in any country, American minorities are hardly oppressed, and certainly not in comparison to minorities in other countries. Minority children do not need permission from white people to succeed. A quarter of Black adults have bachelor’s degrees or higher; Nigerian Americans are the most educated ethnicity in the country. The ethnicities with the top ten household incomes in the U.S. are (from highest to lowest) Asian Indian, Taiwanese, Australian, Filipino, South African, Basque, Indonesian, Latvian, Macedonian, and Pakistani. Americans of English descent rank 38th, behind Iranian (11), Lebanese (12), Chinese (16), and Japanese (17).

What is distinctive about the West is that it determined that slavery, conquest, imperialism, and racism are wrong. Adam Smith, considered by many to be the “father of capitalism,” argued that, not only are slavery and colonialism immoral, but they are also counterproductive. People produce more when they benefit from their efforts than when they labor under the lash or at the point of a bayonet.

Though the woke left hasn’t yet been able to completely rewrite our nation’s history, it has managed to fuel an angry backlash. For example, studies have shown that DEI (Diversity, Equity, and Inclusion) training tends to increase racism. The problem appears to be that much of the training emphasizes group differences rather than focusing on shared values, goals, and interests. Dividing people – and especially the impressionable young – into “oppressors” and “oppressed” is unlikely to foster racial harmony.

Rather than endlessly debating guns, let’s explore why so many people want to use them to murder others. Let’s rebuild the institutions that have been so badly damaged over the last half century by people who want to “burn it all down.”

We can start by ending government policies that are destroying our families and our schools, and we can stop teaching our children that their skin color makes them either evil or helpless.

Richard Fulmer worked as an engineer and a systems analyst, and is now retired and a free-lance writer. He has published some thirty articles and book reviews in free market magazines and blogs. With Robert L. Bradley Jr., Richard wrote the book, Energy: The Master Resource, which was required reading in classes at four different universities, including the University of Texas and the University of Toronto. He is currently working on another book, Caveman Economics: Basic Economics in 25 Prehistoric Tales.