Don’t Hand Them the Ammo

Don’t Hand Them the Ammo 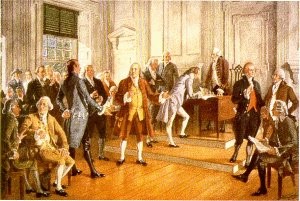 The Constitution in Jeopardy by Russ Feingold and Peter Prindiville

A review by Vickie Deppe – November 2022

Russ Feingold is accomplished, intelligent, well-educated, and, most importantly, well-deserving of his reputation for bipartisanship during his tenure in the United States Senate. When I began reading The Constitution in Jeopardy, I expected an objective scholarly tome but was quickly disabused of this belief. Instead, the arguments he and Prindiville have put forward are rife with significant errors and omissions. How, I wondered, could a man with Feingold’s credentials have reached these conclusions? I then realized that the book is not an objective scholarly undertaking: it is a partisan response to the very real bullying tactics frequently employed by conservative Article V advocates.

Feingold and Prindiville clearly did not come to this topic with an open mind; they are on a mission to derail an imminent convention because its most vocal advocates—as well as the preponderance of state legislatures—are conservative. They admit as much beginning with the prologue and continuing throughout the book. The index has an entry called “conservative convention movement” that contains nineteen sub-entries, many of which are featured as individual index entries as well. Although the convention movement long predates the Trump presidency and continues now that he has left office, he is nonetheless employed as a bogeyman. (As an aside, Trump did not support an Article V Convention; moreover, I observed a substantial surge of interest in Article V among Democratic state legislators in the wake of Trump’s surprise victory in 2016.) I attribute  the flaws in the work to this obvious partisan rancor.

Feingold and Prindiville spend a great deal of time trying to convince readers that this topic is too complex for the average person to sort through, and we must, to be on the safe side, accept their worst-case scenarios about every aspect of an Article V Convention. Yet in the end, they paradoxically argue for greater popular participation in the process of proposing and ratifying amendments. Perhaps deep down inside, they really agree with Yale Professor of Constitutional Law Akhil Amar: the Constitution is “not rocket science, it’s not brain surgery. It’s a short little document that was designed to be understood by ordinary people.”

After painting a post-convention hellscape, the authors go on to argue—ironically— that the Constitution hasn’t undergone enough change in the centuries since its ratification. It’s as though they agree with George Mason’s prediction that “no amendments of the proper kind would ever be obtained by the people if the Government should become oppressive,” yet they cannot abide his solution: giving the states parity with Congress to propose amendments.

Their remedy is a package of changes to Article V to be implemented by Congress…the very body that has presided over this amendatory lethargy. The body that has consistently moved to head off a convention with legislative action every time applications have begun to accumulate. The body that failed to call a convention during the 27 years that there were 34 or more applications in force. The body that Mason warned us could “become oppressive.” The authors propose giving Congress even more power than it already has, reducing the number of states needed to ratify an amendment, and requiring a national popular vote as part of the ratification process. These provisions hold the very real possibility of marginalizing political minorities—whom our system of government is designed to protect from domination by the majority—and shifting the preponderance of amendatory power to a handful of populous states that couldn’t care less about the rights of people who don’t reside in their metroplexes.

Despite the shortcomings of The Constitution in Jeopardy, I am sympathetic to the issues Feingold raises in the prologue: state legislators have, indeed, been harassed and threatened by Article V advocates. I’ve heard—and been subjected to—the same sort of diatribe Feingold describes. Those who have behaved in this manner have inadvertently perpetuated one of the myths that has been so successfully advanced by Article V opponents: that this is a left vs. right issue. And they have roused a formidable opponent in Russ Feingold. But the Article V movement is not about left vs. right: it’s about powerbrokers in DC vs. the rest of us. If they can keep us bickering amongst ourselves, we’ll be too busy to hold them accountable.

While we can look for opportunities to educate our friends, neighbors, and colleagues about the facts and fallacies surrounding Article V, it is even more important that we seek to do everything in our power to repair the damage caused by partisan belligerence coming from our own tribe. A good start would be advocating supermajority votes at the Convention. It would ease the fears of whichever party is in the minority when the Convention is finally called and should be a sought-after indicator of a proposal’s prospects for ratification.

I differ with Russ Feingold on many points, but I stand with him in condemning the rancor.