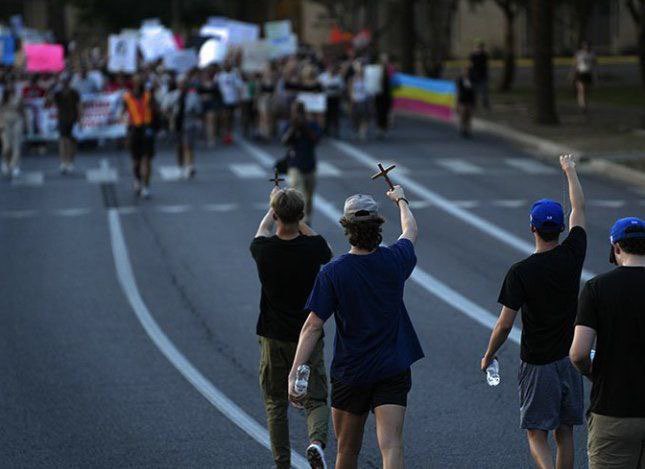 Why You Must Read The Case For Christian Nationalism
By: Pastor Andrew Isker – November 1, 2022

What makes Wolfe’s book so important?

“Nationalism refers to a totality of national action, consisting of civil laws and social facts (e.g., culture), conducted by a nation as a nation, in order to procure for itself both earthly and heavenly good.”

Wolfe spends nearly 100 pages carefully explaining what each of these three things means, which should lead the reader to recognize as plain as day just how hysterical the critics are.

In Chapter 3, which alone is worth the price of the book, Wolfe powerfully explains the root of the peculiar phenomenon of ‘the suicide of the modern West’:

“Western man is enamored with his ideology of universality; it is the chief and only ground of his self-regard. His in-group is all people—it is a universal in-group. Everyone is an object of his beneficence. But in perverse fashion he is his own in-group’s out group. The object of his regard is the non-Westerner at the Westerner’s expense—a bizarre self-denigration rooted in guilt and malaise. Loss and humiliation is the point, however. It is euphoric to him; his own degradation is thrilling. This is his psycho-sexual ethno-masochism, the most pernicious illness of the Western mind.” Wolfe, The Case for Christian Nationalism, pp. 168-169.

“The Western mind needs to be critiqued in order to free it from exploitation and self-disparagement. The key is having the moral and psychological fortitude to endure the psychological discomfort that arise from affirming the truth and denying the false and absurd. Indeed, you must critique and deliberately decline to act on certain mental habits designed to extinguish this discomfort, such as accusations (whether against oneself or others) like “racist” or “fascist” or “xenophobe”; appeals to universality; and ascribing altruism.” ibid, p. 170.

For generations, Westerners, and Americans in particular, have been catechized to believe 1. that the values unique to their culture are held by all people everywhere throughout all time, and 2. Our national sins are uniquely and incalculably worse than all other peoples and we must assume a posture of guilt. Wolfe points out that until these false habits of mind are eradicated among our people, we will continue to see our nation invaded and our people dispossessed. This degradation leads to cities, institutions, and national identities that our ancestors built over generations, captured and destroyed. In short, it is a chapter that demonstrates that it is okay for Americans to put America first. It is okay for your nation to put its people’s interests as its top priority; it is insane that anyone can make you feel guilty for something natural to every organized group of people everywhere for all of history.

After establishing the idea that a nation pursuing its own earthly and heavenly good is good and right, Wolfe goes on in Chapter 4 to give a defense of the idea of a Christian nation pursuing it’s own earthly and heavenly good. He defends the application of “Christian” as a descriptor against the objection that only individuals and not nations can be saved by pointing out that there are all sorts of organized groups of Christians, especially non-voluntary organized groups like the Christian family. So it stands to reason that there can be nations ordered under the kingship of Jesus Christ and that the civil governments of the nation can act for the nation’s heavenly good.

Wolfe’s 5th and 6th Chapters deal with cultural Christianity and civil law, respectively; subjects that the critics of Christian political engagement (and Christian Nationalism more specifically) often bring up as a sort of “gotcha” argument intended to shut down any serious discussion. But far from a bad thing that causes people to believe they are Christians when they are not, Wolfe defines cultural Christianity as the “…social facticity in the service of the Christian religion. A Christian nation as nation has social power and as a Christian nation this power is directed to Christian ends. Thus Christian nations have a social force that prejudices the people for Christian belief and practice.” (ibid, p. 210)