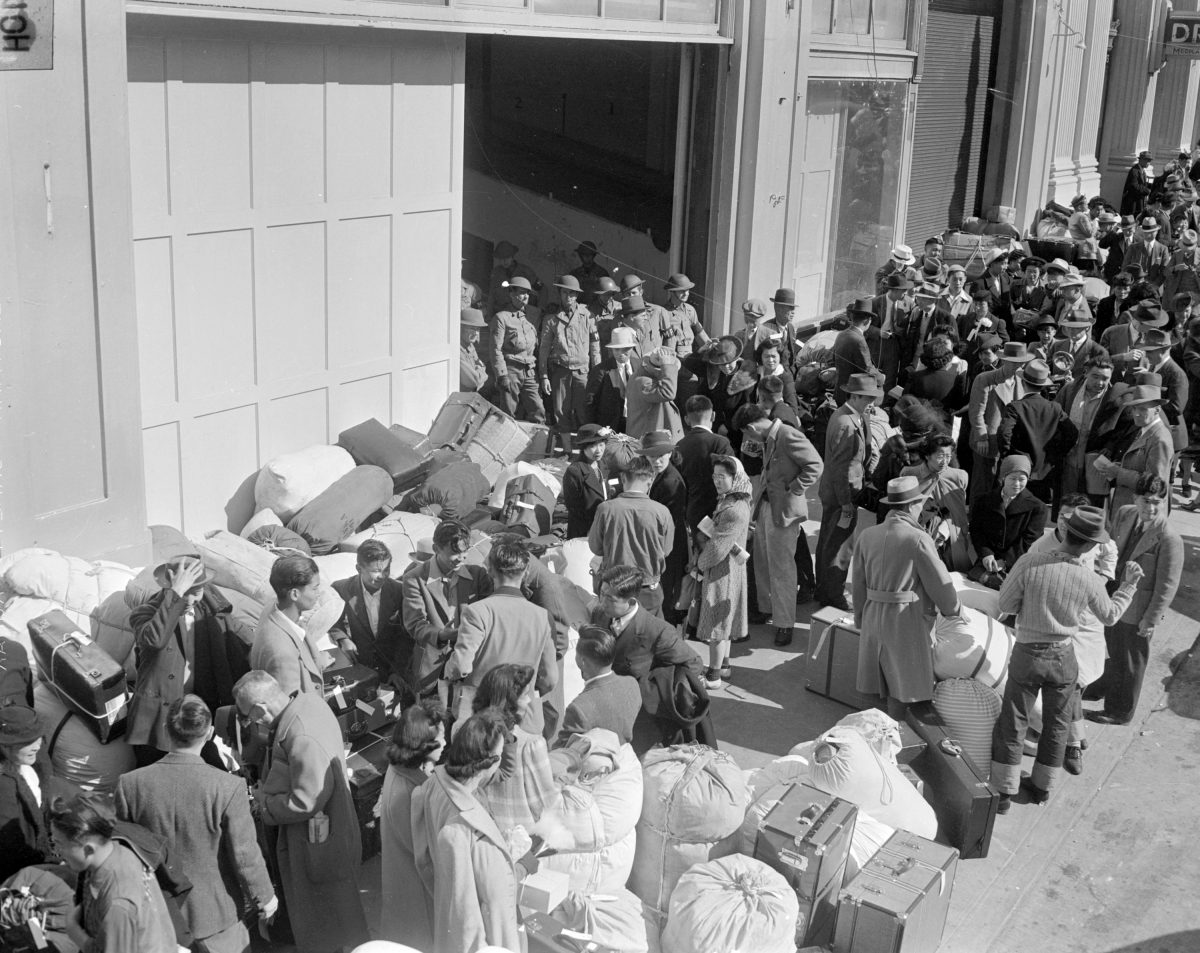 As military police stand guard, people of Japanese descent wait at a transport center in San Francisco on April 6, 1942, for relocation to an internment center at Santa Anita racetrack near Los Angeles. They were among thousands of people forced from their homes in the name of national security following the attack on Pearl Harbor. (AP Photo)

This is the last installment in a series on the nadir, or low point, of the U.S. Supreme Court. This was the period from 1937 to 1944, when the court stopped protecting the Constitution’s limits on the federal government. Our Constitution has never fully recovered.

The first, second, third, fourth, fifth, and sixth installments related to how the justices initially tried to balance the demands of President Franklin D. Roosevelt’s New Deal with the Constitution’s rules. In 1937, however, Roosevelt began to replace sitting justices with New Deal enthusiasts who had no prior judicial credentials. The remodeled bench successively discarded limits on federal spending, federal property ownership, and federal economic regulation. In at least one case, it abandoned habeas corpus and the right to a trial by jury.

This final installment addresses the court’s role in what was, aside from slavery, the most egregious violation of civil rights in U.S. history. It adds some observations on how the court’s abysmal record from 1937 to 1944 continues to affect us today.

In 1942, military authorities imposed a curfew on the populations of Western states. Curfews are understandable in times of war. However, this one applied only to a single ethnic group: people of Japanese ancestry, including U.S. citizens. People of German and Italian ancestry never faced curfews, even though the German saboteur episode discussed in the previous installment showed that the East Coast was vulnerable to attack. The evidence was strong that racism contributed to the distinction.

Two additional military orders required that all people of Japanese ancestry within those Western states both remain at home and leave the affected states. These two orders were obviously contradictory.

Still another decree required all people of Japanese ancestry to report to a “Civil Control Station.” Civil Control Stations were centers for deportation to concentration camps. There, people of Japanese ancestry—again, including U.S. citizens—were held indefinitely. There were no charges to answer and no screening procedure to separate the loyal from the disloyal (the British, by contrast, used a screening procedure to test the loyalty of British residents of German and Austrian ancestry. More than 97 percent of those screened were released).

All of these orders were approved by Roosevelt and, indirectly, by Congress.

Gordon Kiyoshi Hirabayashi was a young natural-born U.S. citizen of unquestioned loyalty. He violated the curfew, but continued to live in his home. He thereby complied with the remain-in-place order, but violated the (inconsistent) removal order.

Hirabayashi was convicted of breaking the curfew and removal orders. He received a jail sentence for each. The sentences were concurrent, which means that they were to run at the same time. He appealed his two convictions, and the case ended up before the Supreme Court.

This was important for two reasons. First, the removal order was far more intrusive than the curfew. Second, the only way to comply with both the removal and remain-in-place orders was to report to a Civil Control Station and be incarcerated.

But Stone never did address the conviction for violating the removal order. On the pretext that Hirabayashi was going to jail anyway, he left the young man with an unreviewed—and probably indefensible—criminal conviction on his record. A federal appeals court finally overturned that conviction in 1987.

While serving as a law professor, Rutledge had been an outspoken supporter of the New Deal and the court-packing plan. FDR rewarded him with a judgeship on a federal court of appeals. Rutledge served there for four years before the president sent him to the Supreme Court. Rutledge was the only one of Roosevelt’s many SCOTUS picks with significant judicial experience.

From FDR’s vantage point, Rutledge was a good choice. First, Rutledge concurred with Stone’s decision in the Hirabayashi case. Second, and more importantly, he supported the president in an abuse of authority that was so outrageous that even some other FDR appointees rebelled.

Constitutional scholars of all political stripes agree that Korematsu v. United States (pdf) was one of the worse Supreme Court decisions ever issued. Fred Toyosaburo Korematsu, another young U.S. citizen of unquestioned loyalty, had been convicted of failing to obey the removal order. On Dec. 18, 1944, the justices sustained the conviction.

The opinion of the court was composed by Hugo Black. That opinion, like so many Supreme Court pronouncements during this era, was laden with evasions, doubletalk, and outright dishonesty.

Black pretended that the order Korematsu violated was for removal only. However, Korematsu proved that the only permissible way to follow the removal order was to report to a Civil Control Station. There, he would be detained and shipped to a concentration camp without hope of release.

“We deem it unjustifiable to call them concentration camps,” Black insisted toward the end of the opinion.

A federal court overturned Korematsu’s conviction in 1983. Yet the Supreme Court has never overruled the “reasoning” in the Korematsu case. It lives on today as the first application of “strict scrutiny” to laws impairing certain constitutional rights.

It also lives on as the first case in which the court evaded strict scrutiny—something it has done too often when testing constitutionally suspect measures favored by the political left. For example, government race discrimination is supposedly subject to strict scrutiny. But as recently as 2016, the justices fudged that standard to permit state universities to discriminate against Caucasians and Asian Americans (pdf).

Conclusion: The Nadir of the Supreme Court

The years 1937 to 1944 represent the low point—the nadir—in the Supreme Court’s long history. The court had issued bad decisions before—some of them egregious. But never had it disregarded its fundamental responsibility to defend the Constitution so deliberately and for so long.

By the time of the Korematsu case, there were signs that the nadir was passing. The decision wasn’t unanimous. Frank Murphy and Robert Jackson, both FDR appointees, dissented. Murphy’s opinion marshaled powerful evidence that the military orders were motivated by racial prejudice. Also dissenting was Owen Roberts. After a career of waffling, his powerful indictment of the government’s actions may well have been his finest hour.

On the same day as the Korematsu decision, the court announced the result in Ex Parte Endo (pdf). The justices granted the petition of a loyal U.S. citizen to leave her concentration camp, after two-and-a-half years of detention.

The 1952 Steel Seizure cases (pdf) were the clearest sign that the era of judicial toadyism was over. The court firmly rebuffed President Harry Truman’s unilateral nationalization of the U.S. steel industry. Hugo Black and Robert Jackson took the lead: Black wrote the opinion for the court, while Jackson penned a memorable and much-quoted concurrence. The president, Jackson pointed out, was commander-in-chief of the Army and Navy. He wasn’t the commander-in-chief of the country.

All of this was welcome. But the Constitution had already suffered enormous damage, from which it has never fully recovered. The present condition of the federal government is evidence of that.

During the third century, the Roman Empire was assailed with dynastic chaos, civil war, plague, and multiple invasions. It nearly collapsed. Beginning at about the year 270, however, highly competent, hard-working emperors managed to work a recovery. Their efforts kept the Roman state intact for another century and a half.

Yet this recovery was only partial. This late empire was a darker place than its former self: less prosperous, less extensive, less stable, and less free.

That’s also true of the United States. The Constitution that made American greatness possible has been severely compromised. Whether we fully repair it is our decision to make. We have no emperors to do the job for us.