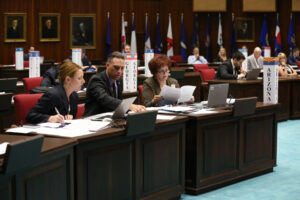 When our Constitution was drafted in 1787, the colonists had just concluded a long, bloody war for independence after repeated attempts to negotiate a peaceful solution to their grievances with the Crown had failed. They were understandably apprehensive of centralized governance; but knew that if they didn’t find a way to present a unified front on the international stage, their regional rivalries could easily be exploited to place them once again under the control of one or more European powers.

At the same time, the delegates to the Constitutional Convention were keenly aware that the new government they were about to create could become every bit as despotic as the one with which they had just cut ties. As the Rev. Mather Byles wryly observed, “Which is better — to be ruled by one tyrant three thousand miles away or by three thousand tyrants one mile away?” With such sentiments in mind, delegates gathered in Philadelphia during the summer of 1787 to “render the Constitution of the Federal Government adequate to the exigencies of the Union.”

James Madison prepared for the Convention by undertaking an exhaustive study of governments—particularly what had caused them to fail. He arrived at the Convention informed by the lessons of history and inspired by the principles of the Enlightenment. Madison and many of his counterparts acknowledged the paradox of human nature: that most people would do the right thing most of the time; but at the same time, no one is above temptation. The delegates viewed the accumulation of unchecked power as an irresistible invitation to abuse. Consequently, one of the key features of Madison’s system was federalism: the new national government would be authorized to undertake only those activities that it didn’t make sense for states to handle individually, like coining money, issuing patents, engaging in diplomacy, and settling disputes between the states. In order to prevent too much power from accumulating at the national level, the states retained jurisdiction over everything else.

What happened?! It didn’t take long for the Framers to be vindicated in their belief that no one is above temptation. Less than a decade after the ratification of the Constitution, the Sedition Act of 1798, which made it a crime to publish content critical of the government—a blatant violation of the First Amendment—was passed and signed into law by some of the very men who laid the foundations of our constitutional republic. Our federal government has lost its way many times since, and today’s national government would likely be unrecognizable to the founding generation. According to Pew Research, the percentage of Americans who believe the federal government does the right thing most of the time has plummeted from nearly 3 in 4 during the Eisenhower administration to just 20% today. Many governmental functions that were meant to be performed by the states are now controlled, either directly or indirectly, from Washington.

The United States is reaching a tipping point: large majorities of Americans support controls on corruption, government spending, and federal overreach. More importantly, there is growing consensus among state legislators that it’s time for the states to use their constitutional authority to intervene. We could be within 24 months of the first-ever Article V Convention in United States history. Learn more about the process of aggregation and find out how close we are by watching Fact Check: Could we have an Article V Convention in less than 24 months?