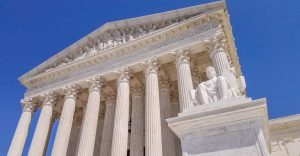 SCOTUS to Hear Case That Could Give State Legislatures, Not Judges, Power to Regulate Elections

The Supreme Court decided on June 30 to hear an important new case that Republicans hope will re-empower state legislatures to make rules for redistricting and governing congressional and presidential elections.

Republicans say the U.S. Constitution has always directly authorized state legislatures to make rules for the conduct of elections, including presidential elections. Democrats say this idea, encompassed by the Independent State Legislature Doctrine, is a fringe conservative legal theory that could endanger voting rights. The Supreme Court has reportedly never ruled on the doctrine.

The doctrine, if endorsed by the high court, could allow state legislatures to select presidential electors in disputed elections, something critics decry as a threat to democracy.

“It means that the Court may take up all the nonsense that has been occurring over the last 10 years,” Adams told The Epoch Times by email.

In a series of Twitter posts, Democratic Party attorney and election law activist Marc Elias denounced the court’s decision to hear the case.

“The Supreme Court will hear a case next term that may validate the dangerous independent state legislature theory,” Elias wrote.

“Congress must enact comprehensive voting rights and anti-subversion legislation before it’s too late,” he wrote, adding “the future of our democracy is on the docket.”

The doctrine has been in the news because conservative Republican activist Ginni Thomas, wife of Supreme Court Justice Clarence Thomas, sent emails to 29 Republican state lawmakers in Arizona urging them to choose the state’s presidential electors despite the disputed popular vote tallies showing Democrat Joe Biden had won the state, The Washington Post reported June 10.

The emails were sent Nov. 9, 2020, after media outlets had called the Arizona race for Biden. The efforts by Republicans to change the result in Arizona were unsuccessful and ultimately the state’s 11 votes in the Electoral College were awarded to Biden.

In her emails, Ginni Thomas, a supporter of then-President Donald Trump, asked Arizona legislators to “stand strong in the face of political and media pressure” and asserted that the responsibility to select electors was “yours and yours alone.” Lawmakers, she wrote, had the “power to fight back against fraud” and “ensure that a clean slate of Electors is chosen.”

The emails attracted the attention of the U.S. House select committee investigating the Jan. 6, 2021, security breach at the U.S. Capitol that delayed official congressional certification of the 2020 presidential election by several hours. Democrats also say there is a conflict of interest because Justice Thomas will participate in the court case about the independent state legislature doctrine. Through her lawyers, Ginni Thomas is resisting committee demands that she testify in the ongoing probe that many Republicans, including Trump, say is a sham.

Tim Moore, a Republican who is the speaker of the North Carolina House of Representatives, explained why he supports the doctrine.

“The U.S. Constitution is crystal clear: state legislatures are responsible for drawing congressional maps, not state court judges, and certainly not with the aid of partisan political operatives,” Moore said in March when he launched an appeal of the Supreme Court of North Carolina’s order redrawing the state’s electoral map against the wishes of the state’s GOP-majority legislature.

“We are hopeful that the Supreme Court will reaffirm this basic principle and will throw out the illegal map imposed on the people of North Carolina by its highest court. It is time to settle the elections clause question once and for all.”

The elections clause in Article 1 states: “The Times, Places and Manner of holding Elections for Senators and Representatives, shall be prescribed in each State by the Legislature thereof.”

In an unsigned order issued on June 30, in Moore v. Harper, court file 21-1271, the Supreme Court agreed to hear the case. The justices did not explain why they decided to hear the case, which is their usual practice when deciding which appeals to take on. For such a petition to be granted, at least four of the nine justices must agree. The case is expected to proceed to oral argument in the court’s upcoming term that begins in October.

Moore filed his petition (pdf) with the court on March 17.

It was preceded by an emergency application seeking to stay a Feb. 14 ruling by the Supreme Court of North Carolina that required the state to modify its existing congressional election districts for the 2022 primary and general elections. Respondent Rebecca Harper is one member of a group of 25 individual North Carolina voters.

On March 7, the Supreme Court turned away (pdf) the stay application. In an opinion concurring in the denial of the stay, Justice Brett Kavanaugh invoked the so-called Purcell principle, writing that the high court “has repeatedly ruled that federal courts ordinarily should not alter state election laws in the period close to an election.”

Matthew Vadum is an award-winning investigative journalist and a recognized expert in left-wing activism.