You Have the Power!

You Have the Power! 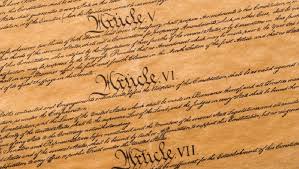 [This is a letter that can be sent by you to your local State Legislators. Ed.]

Who has the most power in our country? We the People, because of the US Constitution.

Who wields the next most power in our country? You. You. You! The state legislators of our nation because of Article V of the US Constitution. Collectively, YOU have more power than all three branches of the federal government!

Who is closest to We the People on political issues and knows them better than anyone? You!

And it has been said that “With power goes responsibility.” Consider James Madison’s exhortation in Federalist No. 57:

The aim of every political constitution is, or ought to be, first to obtain for rulers’ men who possess most wisdom to discern, and most virtue to pursue, the common good of the society; and in the next place, to take the most effectual precautions for keeping them virtuous whilst they continue to hold their public trust.

If our nation is sickened by leaders with less power than yours, then your responsibility calls on you to make our nation well. If you are not responsible, our nation will drift according to the path of the few in disregard of the many. Today, the few in Washington look after themselves rather than We the People or you. Hamilton explained why in Federalist No. 15.

A spirit of faction, which is apt to mingle its poison in the deliberations of all bodies of men, will often hurry the persons of whom they are composed into improprieties and excesses for which they would blush in a private capacity. Virtuous leaders resist this spirit of faction by working together.

The consequences of faction and polarization are best said by Protagoras:

Whenever they gathered into groups [early human beings] would do wrong to each other because they did not yet have the knowledge of how to form a society. As a result, they would scatter and perish. And so, Zeus, fearing that our whole species would be wiped out, sent Hermes to bring reverence and justice to human beings, in order that these two would adorn society and bind people together in friendship.

Only you can heal our country of its polarization.

Our constitution told you how to make our nation well: you must bind our leaders together in friendship. To do this, it is necessary to make process changes to our Constitution to diffuse polarization and influence our Washington leaders to sit together and work out solutions as intended by the founding generation and needed by every person today. Give every elected congressman and senator a way to express his thoughts without party recrimination. Remember! A house divided cannot stand.

We are here on behalf of We the People – bipartisan – to help you exercise your power and responsibility before our country goes too far down the wrong road.

Article V tells us that We the People, can trust you! If We the People cannot trust you, who can we trust? Don’t let us down. Help us save our Nation!

Please help us to help you! We have worked for you for 10 years. We have done our best to bring you together. For three years now, we have brought some of you together to determine your will and support for a convention of states. (See descriptions of these efforts referred to as Academies 1, 2, and 3 at PathToReform.org.) and (Campaign Constitution.com)

We need your help to (1) continue providing our help to you, (2) educate our citizens of your power and responsibility, (3) bring citizens together to support a convention of the states, and (4) shake the media from its bias and turn it to the truth.

How can you help?

Talk to other legislators-Republicans and Democrats-about this letter and whether a convention of the states is the right way to defuse polarization.

Join our Academies, at least one of which is held annually.

Reflect on the mission of the bipartisan National Conference of State Legislatures “to advance the effectiveness, independence and integrity of legislatures and to foster interstate cooperation and facilitate the exchange of information…”