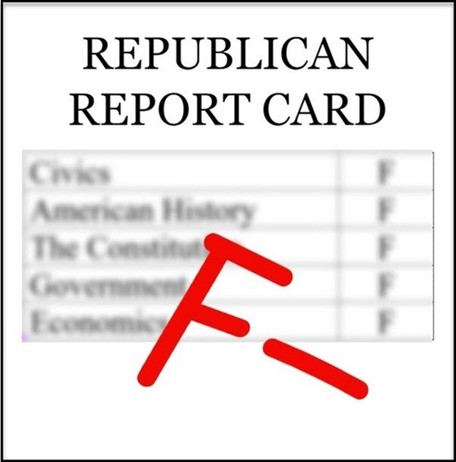 When it comes to doing their job, Republican congress people are failing badly

Conservative Review calculates a Liberty Score for members of Congress based on their voting records.  A look at the scores leads to despair for true conservatives.  Yes, Republicans are better than Democrats.  But generally, they are far from being true conservatives.

The Conservative Review interface gives A through F grades to every person in Congress.  People with an A are highly committed to individual liberty.  Those who have an F are pure statists.  The worse the grade (by a traditional report card metric), the more tyrannical the laws for which the congressperson votes.

If you use the chart to see the grades for congress people in “red” or conservative states, the ones that send Republicans to Congress, you find that the politicians, especially the senators, often receive D or even F grades.

Is there a more conservative state than Mississippi?  Yet both senators receive an F, and the representatives aren’t much better.  In Texas, the grades are F and B.  You see the same disappointing grades in Alabama.  In Kentucky, Mitch McConnell gets an F, while Rand Paul gets an A.

Rand Paul is an outlier.  When it comes to senators, an A is unusual.  Only five receive an A and seven a B out of all 50 Republican senators.  Twenty Republican senators get Fs, and it’s the usual suspects: Romney, Collins, Cassidy, and on and on.  On the House side, the Fs for Republicans repeat at a mind-numbing pace, which goes a long way to explain why Kevin McCarthy (F) was a shoo-in for minority leader.

On the other hand, when you turn to the Democrats, you find that they get mostly straight Fs — which is, for them, the equivalent of straight As.  Play around with the chart, which allows you to sort by score, party, state, tenure, name, etc.  It’s a well designed chart that has a huge amount of (for Republicans, very depressing) information.

It’s not that we conservatives don’t understand the situation in Congress; it’s just that the scorecard provides a clearer assessment of what is going on.  Democrats walk the progressive line almost without fail.  Republicans walk the conservative line in wobbly fashion.

From these data, I conclude that even if Republicans sweep the midterms, they’ll do little to turn the country around.  Sure, the House could put a squeeze on funding all the crazy spending, but do they have the courage to do so?  Defund the Gestapo FBI?  Not likely.  The Senate could stop appointing radicals to the federal courts and possibly ward off a radical Supreme Court replacement if there’s a vacancy.

But let’s be honest: as I said, the midterms are not going to turn the country around.  A Republican win will be a holding action at best.  Even if Trump regains the White House, that also won’t turn the country around.  The only way to get America back on a sound and sane footing is a wholesale repudiation of the District of Columbia’s control over just about everything.

Looked at from that angle, the only possible constitutional avenue for success is a Convention of States (Convention) that ratifies constitutional amendments driving a stake through the heart of D.C.’s grip on power.  Article V of the Constitution allows a Convention that bypasses Congress.  Congress’s responsibility, then, is to call the Convention.  The states would then be in control to pass amendments.

Possibilities include strict limits on the authority of federal agencies; taxation and spending limits; limits on the reach of environmental laws; free speech enhancements; 2nd Amendment enhancements; limitations on federal police and intelligence agencies; and increased focus on protecting borders, life, equal opportunity, and property.  What the most important amendments are would be up for debate.  The convention could specify in advance exactly what should be considered, to avoid a runaway convention.

Currently, we are far away from having enough states sign on.  Only nineteen at present, with thirty-four required to convene the Convention and thirty-eight required to ratify constitutional amendments.  Money and dedication on a monumental scale are required to foster success.  The Convention would have to occur outside the realm of entrenched politicians claiming to be on the conservative side.  Perhaps President Trump, as the ultimate outsider, could promote the Convention.

Christopher Garbacz is a former professor of economics.