The NYT Wrong on Court

The NYT Wrong on Court 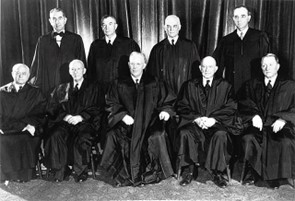 For decades, left-wing activists cemented their power in the public square by treating the U.S. judiciary as a partisan weapon with which to impose progressive social, cultural, and political ideas on the rest of the country. Notwithstanding the institutional decay of the American judicial system that has resulted from this power grab—including the harm to the political legitimacy of the Supreme Court and our constitutional system more generally—the left is largely ignorant of its own culpability in this development. A widely read New York Times piece published late last month underscores just how much.

The report, deceptively titled “An ‘Imperial Supreme Court’ Asserts Its Power, Alarming Scholars,” decries the Court’s “distinctive insistence on its dominance and the justices’ willingness to use procedural shortcuts to achieve it.” The Court, the article continues, “has rapidly been accumulating power at the expense of every other part of the government” and is increasingly defined by conservative justices’ so-called “imperial impulses.”

The Times’ declaration of a perceived right-wing “imperialism” on the High Court demonstrates an almost laughable lack of political self-awareness, as well as a basic misunderstanding of the Court’s recent rulings.

Take, for instance, the Dobbs ruling, which has more than any other single case animated the left’s hostility toward the Court. Despite the Times’ insistence, Dobbs was the exact opposite of “autocratic” or “imperial.” By allowing American voters to make their own decisions on the legality of abortion at the state level, the Court in Dobbs was not “accumulating power” for itself, but rather returning it to the people and their representatives. Conversely, it was the Court’s decision in Roe v. Wade—which Dobbs overturned—that actually represented a blatant overreach of judicial power.

Moreover, as legal and historical scholars of every political stripe have long acknowledged, the Court’s “imperial” tendencies hardly began with the ascension of former President Trump’s three nominees. Judicial activism first arose on the American legal scene during the tenure of Chief Justice Earl Warren. Although Warren was appointed by a Republican, the Court under his watch handed down one activist decision after another, where Warren saw himself not as a guardian of the Constitution or dispassionate interpreter of the law, but as a social and cultural activist charged with moving the country in a progressive direction. The Warren Court paved the way for a far-left jurisprudential activism that enabled future justices to run rampant over the Constitution and usurp Americans’ right to make their own laws.

Regularly described as “revolutionary,” the philosophy of the Warren Court has had a lasting and destructive effect on how Americans perceive the law—and further empowered the judiciary to seize the lawmaking powers of Congress. It was Warren’s philosophy that enabled the Court to invent out of whole cloth constitutional rights to abortion, same sex “marriage,” contraception, and a plethora of other liberal pet projects.

The left’s campaign to elevate the “right” to an abortion as “constitutional” is, for instance, not supported by even the most left-wing legal scholars. Pro-abortion legal scholar and dean of Stanford Law School, John Hart Ely, wrote that Roe “was not constitutional law and gave almost no appearance of an obligation to try to be”—a sentiment echoed by liberal constitutional scholar Laurence Tribe, who asserted that “behind [Roe’s] own verbal smokescreen, the substantive judgment on which it rests is nowhere to be found.” Even Edward Lazarus, a former law clerk to the justice who authored the Roe opinion, Justice Harry Blackmun, conceded that no one has “produced a convincing defense of Roe on its own terms.”

Defenders of the Warren Court argue, not incorrectly, that it delivered important rulings advancing causes like the Civil Rights Movement. But the fact that the Court in effect legislated from the federal bench rather than allowing Congress to pass actual legislation to address the issues at hand has led to confusion in the law on matters like affirmative action. Now, the current Court is being forced to address those same issues again—further exacerbating the legitimacy crisis that the Warren Court created nearly a century ago.

Warren’s philosophy also empowered former Justice Anthony Kennedy to cast the deciding vote in the 2015 case Obergefell v. Hodges, which forbade states from enacting laws that define marriage as a union between one man and one woman. As Justice Antonin Scalia was quick to note in his dissent, Kennedy’s decision relied upon “the mystical aphorisms of the fortune cookie” and his own worldview rather than any sound constitutional basis.

As such, the New York Times’ insistence that the Roberts Court and pro-democracy decisions like Dobbs are responsible for imperializing the Supreme Court is completely divorced from historical reality. Of course, the Times and other left-wing entities had no complaints about the Court’s clear “dominance” and accumulation of power when it was moving the country and the national culture leftward. But now that constitutionalists have gained a decisive majority on the Court for the first time in generations, the same figures and organizations that normalized judicial overreach over the course of nearly a century are now crying foul.

In reality, decisions like Dobbs and justices like Clarence Thomas and Samuel Alito are—after decades of judicial overreach and left-wing activism cloaked in black—slowly but surely returning the Court to its proper constitutional limits. And for the sake of self-government, the separation of powers, and yes, democracy itself, every American has ample reason to rejoice in that fact.