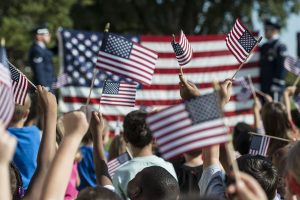 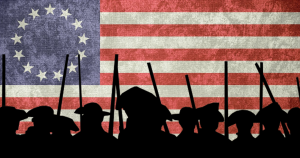 By Mike Kapic / June 4, 2021 / Comments Off on Scheduling Our Revolution

Here’s When The American Founders Thought Revolution Was Justified The American Revolution proved a people can not only overthrow an existing regime but establish a free, peaceful, and functional government of their own. By Kevin Portteus – MAY 19, 2021 According to the American Declaration of Independence, people enter into political society for the sake of protecting their… 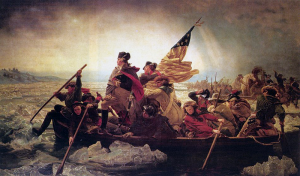 Our Founding Fathers Risked Beheading—And Changed the World By Nancy Thorner On Sep 7, 2019 Chicago author and lawyer, David Shestokas, shared his fascinating story about his book, “Creating the Declaration of Independence” at the 4th Annual Conservative Activist Conference held at Bolingbrook, IL, on Saturday August 24, 2019. David Shestokas began his presentation by imparting why it… 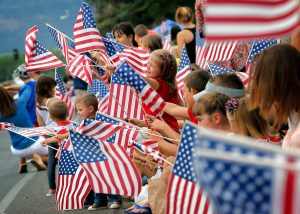 This Day in History: Happy Independence Day! by Tara Ross July 4, 2016 On this day in 1776, the Continental Congress adopts our Declaration of Independence. It had already resolved on July 2 that “these United Colonies are, and, of right, ought to be, Free and Independent States . . . .” Now it formally adopted…

Book Review by Mark G. Spencer Calling the House to Order A bill of rights was the No. 1 priority of the first Congress. But no one thought they were producing sacred writ.  ‘We are in a wilderness without a single footstep to guide us,” James Madison said of the harrowing task facing the First…

Our Noble Declaration of Independence

Independence Day makes Progressives squirm. They despise the principles of the American Revolution. If they could, their scotus judges would gut the Declaration as thoroughly as they have the Constitution. To them, our Noble Declaration, this expression of God-given reason subverts social justice; they are right.

Since the Declaration is indeed hostile to their moral relativism, the Left has long attempted to minimize our founding to a fuzzy faith in the people. The “deriving their just powers from the consent of the governed,” and “all men are created equal,” translates in their Marxist minds as widespread democracy accompanied with equal stuff to all. It is in the democratic atmosphere alone in which their demagogues can incite the people into various factions constantly at each other’s throats.

Despite their efforts they can’t twist the Declaration into a statement of majoritarianism. A few minutes in actual reading and contemplation puts their slogans to rest. In the Preamble the Founders dissolved political bands, the statutory power of Great Britain. However, left untouched were the moral bands which connect all men, which are derived from the Laws of Nature and Nature’s God.

Consent of the governed is not a rule for democracy. Consent is the means to an end, the security of our unalienable rights. Majoritarian consent alone is insufficient to make political power just, for we are all subject to the Law of Reason, the Natural Law. If numbers alone made right, the American Revolution would be deprived of its moral justification. The moral order comes first. Only after they had set forth that order did the Founders turn to government. And there too they were clear: government is instituted to secure our rights—that is its purpose. And it gets its just powers from the consent of the governed.

Government is thus twice limited: by its end, to secure our rights; and by its means, which require our consent if they are to be legitimate. Absent moral justification, our revolution could be regarded as littler better than a Black Lives Matter riot. Modern resort to dangerous majoritarianism is heard when the media often describe a congressionally passed bill as having “bipartisan support.” That is majoritarian Left-speak for just and moral law. It just isn’t so.

Our Founders recognized their duty, as equals among mankind, to explain why separation from Great Britain was necessary. Only a decent and civil people would even bother. The Declaration isn’t a crude manifesto of political separation and power to the people.

Before resorting to force for correcting abuses of government, civilized men will appeal to reason and even sentiment. So imbued were the Founders with introspective reason, they asked if they weren’t making too much of their complaints against George III. The same reason convinced them that America was headed for despotism, and it was necessary to “throw off such government.” Being rational yet knowing that one should not sit alone in judgment of one’s actions, they not only submitted facts to a candid world, but asked God Himself, “the Supreme Judge of the World,” if they were right.

The Declaration of Independence wasn’t signed by the chairman of a peoples’ committee. No demagogue-in-waiting stood ready to assume authoritarian power. Individual men, through reliance on the protection of divine Providence, mutually pledged to each other their lives, fortunes, and sacred Honor. There is nothing more to pledge beyond one’s life, possessions, and especially honor. In an age when a man’s word carried more force than law, these men were so convinced in the righteousness and truth of their cause, they swore to never dishonor themselves and suffer the disdain of their peers.

This fourth of July, I suggest we all take some time beyond BBQ and fireworks. Engage your friends and in-laws in discussion of Our Noble Declaration of Independence.

Hat tip: Eidelberg, Paul. On the Silence of the Declaration of Independence. Amherst: University of Massachusetts Press, 1976. Page 56.