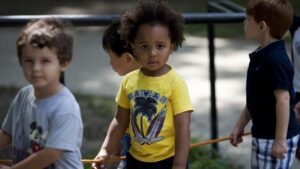 Once again, children have become objects unworthy of life, protection, or tutelage. What kind of society does this to children?

Americans who would sacrifice anything to protect their children may be surprised to learn that their inclination is a rather modern phenomenon. For most of human history, the most dangerous period of any person’s life was childhood. Only if a newborn survived the first decade of disease, warfare, hunger, and all the other mundane threats to ordinary human existence would the survivor gain any type of social recognition.

O.M. Bakke explores this reality in his book, “When Children Became People: The Birth of Childhood in Early Christianity.” Before the spread of Christianity transformed prevailing cultural beliefs, children had no legal standing in the pagan societies of the Roman Empire and elsewhere.

In human history, it has been normal for unwanted babies to be aborted, smothered, or abandoned to wildlife. Parents could beat or kill their children at will. Children were routinely sold into slavery. And it was quite ordinary for adults to use low-class or enslaved children as sexual playthings.

Christianity revolutionized the way Western society thought of children. They gained recognition, inherent value, and special focus. Rather than seen as burdens not worthy of consideration until they could contribute to a family’s survival, children became blessings deserving of protection, education, and guidance. As Bakke concludes of this momentous change in Western history: children became people.

Today, we sadly are witnessing the reverse of this civilizational achievement. Once again, children have become objects unworthy of life, protection, or tutelage.

Their mere right to exist is balanced against a mother’s right to convenience. Their childhoods have become sexualized. Their education has been abandoned and replaced with regimens of indoctrination that make them easy targets for governments, corporations, and predators to exploit.

Right before our eyes, those with power are stripping American children of their personhood. Here are five ways I see this clearly happening in our society right now.

Not long ago, abortion was commonly understood as the murder of a baby and an act deserving of shame. Now abortion is perversely defended as both a “human right” and a part of “family planning,” even though it extinguishes entirely the rights of at least one human and diminishes a family forever.

Abortion lobbyists have succeeded in reducing babies to “clumps of cells” or “fetuses” or “tumors,” anything that can be used linguistically to dehumanize a living being. Far removed from the moral constraints of shame, some women actually celebrate the deaths of their children.

Nearly 65 million babies have been killed since Roe v. Wade in 1973, and still, the pagan bloodlust toward children can’t be slaked. Before every genocide, before every moral degradation, the perpetrator first looks toward his victim and justifies it by saying, “You are not human.” With abortion, it’s been no different.

It is simply astonishing that the Democratic Party finds it controversial when parents demand that teachers not discuss sexual acts with their five-year-old children. On what moral plane does one have to exist to believe that a child learning to ride a bike and tie shoes should also be introduced to graphic lessons in sexual intercourse, homosexuality, and transgenderism?

In the past, an adult pushing sexual instruction on children would have earned a ticket to prison and a lifetime ban from ever getting closer than 1,000 feet to a school. Now we hire them as teachers.

One of the most treacherous psychological crimes ever committed by adults against children is the former’s endless propaganda to convince the latter that the world is under threat of imminent doom. Children are being told to fear we’ve already invited the climate apocalypse and now all we can do is mitigate it. As a result, “In a Washington Post-Kaiser Family Foundation poll of American teenagers released in September [2019], 57 percent said that climate change made them feel scared and 52 percent said it made them feel angry, both higher rates than among adults.”

Governments, schools, public figures, and Hollywood entertainment bombard young minds all day long with the falsehood that we are mere years away from a global cooling…er, global warming… I mean, climate change apocalypse. As the Washington Post noted in 2020: “The United Nations’ Intergovernmental Panel on Climate Change said in 2018 that policymakers have just 12 years to avert the worst consequences of global warming.”

Children have no idea that adults have been telling this lie for more than 100 years. Whether or not you believe hydrocarbons are evil and man’s industrial ingenuity is really sufficient to destroy our 4.5 billion-year-old planet Earth, one thing is indisputable: no such apocalypse is likely to take place imminently. Yet, as indoctrination works best when it is applied early in a person’s life, we terrify our children with the lie that the world as we know it is coming to an end tomorrow.

If it were not enough to scare children with lies of an impending apocalypse, the Democratic Party has decided to drain children of their self-worth and confidence as well. We were not long ago on the path toward a colorblind society in which race was properly dismissed as an inconsequential trait that has no bearing on a person’s talents or character.

Today, schools around the country indoctrinate children to believe there is nothing so important as a person’s skin color. How we have flipped the civil rights movement on its head!

Not long ago, Americans could acknowledge past national failures while still joining in celebration of America’s great achievements. Now the drumbeat from leftist schools and institutions is constant: there has never been anything exceptional about the United States.

Instead of learning how America’s struggle for independence advanced the cause of human liberty around the world, young students are routinely taught that America’s founding was institutionalized “white supremacy” disguised as freedom. Instead of learning how vital individual rights are in protecting the public from inevitable abuses of government power, government-run schools have redefined personal freedoms as “selfish” while lauding government bureaucracy as “trustworthy” and “beneficent.”

How can the United States of America survive as a nation when its youngest generations are taught in schools that America is a force for evil? How can adults of all races coexist when the children of all races are taught to distrust one another? How can American freedom survive when young minds are taught that only government is good?

Two years of irregular school schedules and mandatory remote learning have taken their toll on the next generation. Truancy has skyrocketed, while academic achievement has plummeted. Toddlers’ speech and language development have predictably suffered.

Schoolchildren have never been more lonely and suicidal. Even as most mask mandates have finally been lifted, too many Democrat-run cities around the country, and lied-to parents, still force our youngest to hide their faces.

As any American with common sense tried to warn more than two years ago, these draconian Covid-19 measures purportedly enacted in the name of health have done nothing but harm children’s health. Worse, these harms will scar young Americans for life.

What kind of society does this to children? Such casual cruelty disguised as “protection” is nothing short of horrendous. It is as if we have stepped 2,000 years back in time to an age when children were not regarded as people at all.

J.B. Shurk is a proud American from Daniel Boone country.