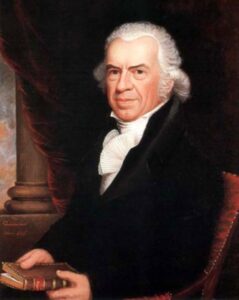 Isaiah Thomas, “most wanted” by the British

“Undaunted by tyrants, we’ll DIE or be FREE.”

On May 3, 1775, the first newspaper account of the Battles of Lexington and Concord appears. The printer was a Patriot that you’ve probably never heard of—but perhaps you should. Indeed, Isaiah Thomas was so effective that he was on a “most wanted” list of sorts: The British wanted him dead.

Early in the American Revolution, a circular letter advised British officers to put men such as Samuel Adams and John Hancock “to the sword, destroy their houses and plunder their effects.” The letter was firm in its conclusion: “Don’t forget those trumpeters of sedition, the printers Edes and Gill, and Thomas.”

Just what was it that Thomas had done? Could a printer really be that dangerous?

Thomas had been a printer for most of his life, ever since his apprenticeship as a young boy. He’d excelled at his work, but he was restless and wanted to go abroad to London. He tried, but could never find the funds. He was more or less stuck in America.

Perhaps that was providential?

Thomas returned to Boston in 1770 and went back into the printing business. He partnered with his former boss to publish “The Massachusetts Spy.” Before too long, however, the older printer retired and Thomas was left to run the business on his own.

The Massachusetts Spy could be pretty critical of the British government, which created a bit of a dangerous situation for Thomas. He was once nearly prosecuted for malicious libel. Sometimes, he was burned in effigy by Loyalists. At other times, he was threatened with tarring.

By the middle of April 1775, he sensed that he might need to leave Boston.

“I found the Liberty of the Press [in Boston],” he later wrote, “daily declining, and myself growing more and more obnoxious to the Enemies of our once happy Constitution . . . some of whom had carried their Resentment so far as Twice to endeavour to assasinate me . . . .”

He packed up his press and snuck it out of Boston in the middle of the night. He moved his supplies to Worcester instead.

His timing couldn’t have been better: The “shot heard round the world” at Lexington occurred only three days later. The American Revolution was on! And Thomas was ready to go, printing eyewitness accounts of the battles as early as May 3, from Worcester. His accounts stirred people to action and generally riled them up, ready to defend the Patriot cause.

Only one short year later, Thomas would publish another important piece. On July 17, 1776, he published an early account of the Declaration of Independence. Emblazoned across the top of his paper were the stirring words: “Undaunted by Tyrants we’ll DIE or be FREE.” Legend has it that Thomas was the first in Massachusetts to publicly read the Declaration. He seized the opportunity when an express rider came through, carrying a copy of that document from Philadelphia to Boston.

Thomas suffered financially during the war, but he later bounced back and became a successful printer. He established the American Antiquarian Society, which was dedicated to preserving the “literature of liberty.” In other words, Thomas ensured that many Revolutionary-era newspapers, books, pamphlets, and letters would be saved for posterity.

His work stirred people to fight for the Patriot cause back then. And it saved historical documents, which have proven critical as we seek to preserve our heritage today.

Another (nearly forgotten) hero of our Revolution who deserves to be remembered.