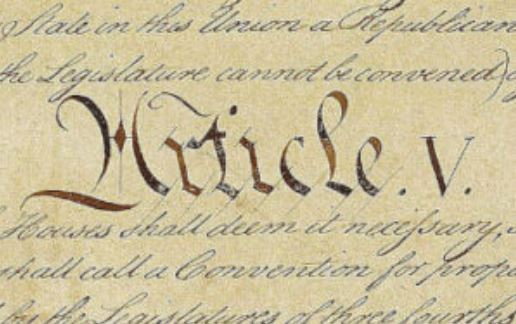 By Stuart MacPhail – October 2020
“[T]he Supreme Court has become the Constitution. Through judicial interpretation, the Supreme Court has gained the power, essentially, to rewrite the Constitution as it sees fit.  And the Court’s revisions cannot be reversed or challenged,” says New York attorney and prolific author James W. Lucas in an opinion piece published recently by American Greatness.

The headline to his piece summarizes his position: The Solution to Radical Judges Is to Revive Article V.  No, Lucas is not proposing a constitutional amendment dealing with SCOTUS tenure.  Rather, he is making a case that the Constitution’s amendment provision – Article V – needs to be amended.  He believes if the process were more workable “It could also act as a psychological brake on the judicial amendment of the Constitution.”

Lucas contends that the Constitution’s framers intended that constitutional change come about through the democratic political process of amendment, but that process was designed for a country with 1/100th today’s American population, and needs to be modified.

He points out that “[t]he United States Constitution is now the most difficult charter to amend in the world, and it shows.”  He suggests that “A few simple adjustments to Article V … could re-energize the amendment process.”

Lucas believes “[a] content-neutral reform of the amendment process could attract bipartisan support in our time when many long for national unity on something.  And it would enable ‘We The People,’ not five unelected and unaccountable judges, to have the last word once more on our fundamental national law.”  Read his thoughtful piece HERE.

“The liberties protected by the Constitution are not fair-weather freedoms — in place when times are good but able to be cast aside in times of trouble.”

“There is no question that this country has faced, and will face, emergencies of every sort. But the solution to a national crisis can never be permitted to supersede the commitment to individual liberty that stands as the foundation of the American experiment. The Constitution cannot accept the concept of a ‘new normal’ where the basic liberties of the people can be subordinated to open-ended emergency mitigation measures.”