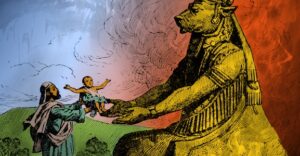 Unbelief is Destructive. That’s Why Pagan Nationalism is So Dangerous.

The hullabaloo about the bugaboo of “Christian nationalism” is a diversion from what its opponents are of necessity promoting—namely, pagan nationalism.

Noah Webster defined pagan as “pertaining to the worship of false gods.” A pagan worldview, therefore, is one based on a “god” or “authority” other than the one true God revealed in the Old and New Testaments.

Pagan nationalism, then, is the belief that America should be defined by a pagan (non-Christian) worldview, and that the government should take active steps to keep it that way. Pagan nationalism seeks to merge pagan and American identities, enthroning a non-Christian worldview as the standard by which all things are judged.

It is worthwhile to note that abortion, infanticide, and sexual perversion are not new—they have been the offspring of paganism for millennia—but now we have pagan nationalists in America promoting these things as the basis of our society.

While never using the term “pagan nationalism,” the Bible does address the concept.

The word of the Lord that came to the prophet Micah included an indictment that Israel and Judah had “kept the statutes of Omri, and all the works of the house of Ahab; and…[had] walked in their counsels” (Micah 6:16).

Omri and Ahab may have (at times) claimed to follow the one true God, but the pagan worldview influenced their governance of Israel. Omri followed the example of Jeroboam and worshipped idols (1 Kings 16:26) and Ahab built an altar for the false god Baal (1 Kings 16:32). These were wicked kings who worshipped false gods and implemented a pagan worldview in society; they were pagan nationalists because they believed paganism (the worship of false gods) should undergird and define society.

Building on Micah’s theme, the prophet Jeremiah notes that the civil rulers’ acceptance of paganism led them to fill the land “with the blood of innocents” (cf. Jeremiah 19:4-5; 32:35).

Idolatry and paganism are consistently viewed as destructive in Scripture because only the biblical worldview provides the basis for righteousness in society. Abandon biblical law for society, and the only alternative is pagan nationalism.

The honest student of history will note that pagan nationalism has left a trail of destruction and devastation in its wake. The pagan cultures surrounding Israel were devoted to false gods and all sorts of debaucheries, including incest, adultery, infanticide, and bestiality (cf. Leviticus 18). It was for this paganism that the land vomited out its inhabitants (Leviticus 18:28).

The Aztecs and the Mayans practiced pagan nationalism when they butchered both children and adults to appease their pagan deities.

Greco-Roman civilization became known for its sexual immorality, perversion, and infanticide. Pagan nationalism led to the practice of “exposing” unwanted babies, leaving them for dead outside the city gates.

Ancient Carthage was no better. They sacrificed their children to pagan gods for centuries.

Notably, it was the spread of the Christian worldview which led to the demise of paganism. Author Alvin J. Schmidt writes that it was “the early church’s opposition to abortion, along with its condemnation of infanticide and child abandonment” which became a “major factor in institutionalizing the sanctity of human life in the Western world.” Historian W. E. H. Lecky notes that “the value and sanctity of infant life…broadly distinguishe[d] Christian from pagan societies.”

The advance of Christianity led to the rise of private institutions to care for the poor, the immigrant, the sick, and the downtrodden. This compassionate care stands in stark contrast to the pagan nationalism that prevailed prior to Christianity’s influence on the nations.

Unfortunately, pagan nationalism has not yet died out completely. Whenever a nation seeks to base their laws and ordinances on anything other than the revealed Law-Word of God, they are practicing a form of pagan nationalism.

Hitler promoted pagan nationalism in Nazi Germany, carrying off Jewish children to be shot or killed in a gas chamber.

Stalin’s regime in the Soviet Union was one of the clearest examples of pagan nationalism. The false god in Stalin’s mind was not a deity from the Roman pantheon—it was man, exalted to the position of the divine. Atheism is simply clandestine paganism. And Stalin’s pagan nationalism led to the unjust deaths of over 20 million people.

Paganism is wrong wherever it takes root. Claiming “atheism” or “no religious belief” is no excuse. Every culture that embraces pagan nationalism will be held accountable (cf. Jeremiah 25:29).

The Elephant in the Room

As American pagans decry Christianity, their pagan nationalism is the elephant in the room. The alternative to a society based on biblical law is a society based on paganism. And that is a dangerous thing. Unbelief and idolatry are so destructive because they replace the just standard of God’s Law-Word with a manmade, pagan standard. We’ve seen how that works out in history. And we’re seeing how it works out now.

When it comes to our culture’s embrace of pagan nationalism, including local groups like Lancaster Stands Up, they are simply parroting the narrative of the pagans who have died out before them. But the current climate has allowed the movement to grow, as narcissistic leaders disingenuously use language such as “equality” and “love.” Aided by the Internet, social media, and liberal news outlets, pagan nationalism has spread, most notably in the government school system. The prevalence of pagan nationalism as an ideology makes it one of the greatest threats to liberty and justice in America today.

The example of the biblical prophets is instructive. They clearly articulated the dangers of pagan nationalism and decried the political and religious leaders who abandoned God’s Law-Word in favor of pagan laws. We must do the same today.

Pagan nationalism has built a base that is ready and willing to plunge America into the same flood of debauchery that has characterized pagan societies in the past. The Christian faith tells us that followers of Christ must stand against the shedding of innocent blood and the rise of false ideologies. The biblical worldview must be boldly proclaimed to all people.

Otherwise, it’s clear pagan nationalists will impose their ungodly worldview on all Americans. We are already seeing it happen. But there is only one type of nationalism that will be victorious. And it isn’t pagan nationalism. It’s the nationalism that is demonstrated when the kings of the earth “serve the Lord with fear, and rejoice with trembling” (Psalm 2:11).

A growing number of Americans realize the con of these supposedly “neutral” pagans. They are not about “equality” or “love.” They are committed to forcing their pagan nationalism on all of us. And though I understand the dangers of pagan nationalism, I also know it is a movement of death with a diminishing powerbase.  The Apostle Paul told Timothy that wicked men “will not get very far, for their folly will be plain to all” (2 Timothy 3:9).

Pagans, your track record is horrendous, and your worldview is defunct. Stop promoting pagan nationalism. Repent of your folly and believe in Christ.