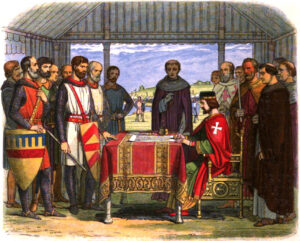 Understanding the U.S. Constitution requires knowing some English constitutional and legal history. Both the Constitution and the Bill of Rights are loaded with words and phrases inherited from England.

That English inherence has been enormously important in shaping the U.S. legal system and culture generally. When educators underplay the English background in service to the “diversity” agenda, they leave their students clueless as to the meaning and significance of the Constitution, and susceptible to “woke” propaganda.

England is the largest of the four components in the United Kingdom, which also includes Scotland, Wales, and Northern Ireland. All of the 13 colonies that came to be the United States (as well as the 14th state, Vermont) adopted English political and legal institutions. Even today, most states have constitutional provisions or statutes declaring the common law of England to be the basic law of their courts.

Colonial Americans, like the English, treated the Magna Carta, the Petition of Right, and the English Bill of Rights as foundational documents. Colonial legislatures were structured by charters based on English law. Most of the colonial governors were appointed by the Crown. American courts applied English procedures, respected English case precedents, and sometimes consulted acts of Parliament. American law students learned their legal doctrine from Edward Coke’s “Institutes of the Lawes [sic] of England” or William Blackstone’s “Commentaries on the Laws of England.”

Nearly all the leading participants in the constitutional debates of 1787 to 1790 had worked within the Anglo-American political and legal system. Some had spent considerable time at “home,” as the colonials sometimes called England. John Dickinson studied law at London’s Middle Temple (one of the Inns of Court) and frequently observed Parliament in action. Ben Franklin lived for years in London, where he represented colonial interests. Franklin was also a postmaster general in the unified British imperial Post Office.

Other leading Founders, while not spending time in England, studied under those who had. One such Founder was James Wilson, a Scottish immigrant, who clerked in Dickinson’s law office.

The framers weren’t trying to trick anyone by using legal and political terms. They were simply using language efficiently. During the ratification debates, the framers and other spokesmen for the Constitution carefully explained these words and phrases to the general public (pdf).

First, 18th-century lawyers, as with attorneys everywhere, divided the law into categories. Their books show that commercial law was a separate category from patent law or bankruptcy law (pdf). That’s why the Constitution itemizes each of these categories separately (Article I, Section 8).

Thus, when the Constitution gave Congress the power to “regulate Commerce … among the several States,” it bestowed authority to regulate activities that 18th-century lawyers considered to be “Commerce.” It didn’t grant Congress the power to govern the entire economy, as the modern Supreme Court seems to think. Instead, as leading Founders explained, the regulation of most economic activities was left to the states (pdf).

Second, some provisions are in the Constitution specifically to react to particular rules of Anglo-American law. One of these is the Ninth Amendment.

The Ninth Amendment is a response to an Anglo-American guideline for interpreting documents. The guideline was (and is) often expressed in the Latin sentence, Designatio unius est exclusio alterius—the designation of one item is the exclusion of another. It means that if you have a list of items, then you can presume those not on the list are excluded.

The Ninth Amendment was adopted so that this guideline wouldn’t apply to limits on government power specifically mentioned in the Constitution. It tells us that the federal government is limited in ways not specifically listed.

Third, many of the Constitution’s words and phrases are terms of art taken from centuries of English law and political practice. A “term of art” is a word or phrase with a specialized definition different from the ordinary meaning.

In common speech, the word “necessary” usually means “absolutely required.” But in the necessary and proper clause (Article I, Section 8, Clause 18), it has the specialized meaning of “incidental.” Incidental, in turn, is also a word with a particular legal definition.

Robert G. Natelson, a former constitutional law professor and historian, is senior fellow in constitutional jurisprudence at the Independence Institute in Denver. In 2005, he worked at Oxford University and the Middle Temple in England researching 18th century Anglo-American law. He is the author of “The Original Constitution: What It Actually Said and Meant” (3rd ed., 2015).