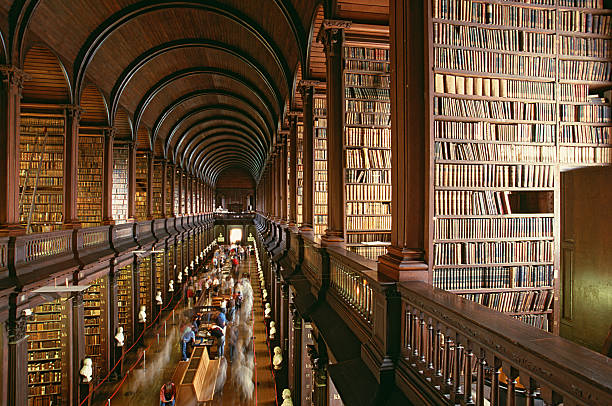 Wisdom in old shelves and books.

The Thinnest Veneer of Civilization

We are in a great experiment in which regressive progressivism discounts all the institutions and methodologies of the past that have guaranteed a safe, affluent, well-fed and sheltered America.

Civilization is fragile. It hinges on ensuring the stuff of life.

To be able to eat, to move about, to have shelter, to be free from state or tribal coercion, to be secure abroad, and safe at home—only that allows cultures to be freed from the daily drudgery of mere survival.

So, the great achievement of Western civilization—consensual government, individual freedom, rationalism in partnership with religious belief, free market economics, and constant self-critique and audit—was to liberate people from daily worry over state violence, random crime, famine, and an often-unforgiving nature.

But so often the resulting leisure and affluence instead deluded arrogant Western societies into thinking that modern man no longer needed to worry about the fruits of civilization he took to be his elemental birthright.

As a result, the once prosperous Greek city-state, Roman Empire, Renaissance republics, and European democracies of the 1930s imploded—as civilization went headlong in reverse.

We in the modern Western world are now facing just such a crisis.

We talk grandly about the globalized Great Reset. We blindly accept the faddish New Green Deal. We virtue signal about defunding the police. We merely shrug at open borders. And we brag about banning fertilizers and pesticides, outlawing the internal combustion engine, and discounting Armageddon in the nuclear age—as if on autopilot we have already reached utopia.

But meanwhile Westerners are systematically destroying the very elements of our civilization that permitted such fantasies in the first place.

Take fuel. Europeans arrogantly lectured the world that they no longer need traditional fuels. So, they shut down nuclear power plants. They stopped drilling for oil and gas. And they banned coal.

What followed was a dystopian nightmare. Europeans will burn dirty wood this winter as their civilization reverts from postmodern abundance to premodern survival.

The middle class has now mortgaged its upward mobility to ensure that they might afford gasoline, heating oil, and skyrocketing electricity.

The duty of the Pentagon is to keep America safe by deterring enemies, reassuring allies, and winning over neutrals.

The result of those suicidal Pentagon detours is the fiasco in Afghanistan, the aggression of Vladimir Putin’s Russia, the new bellicosity of China, and the loud threats of rogue regimes like Iran.

At home, the Biden Administration inexplicably destroyed the southern border—as if civilized nations of the past never needed such boundaries.

Utter chaos followed. Three million poured into the United States illegally. They entered without audit, and largely without skills, high-school diplomas, or capital.

The streets of our cities are anarchical—and by intent.

Defunding the police, emptying the jails, and destroying the criminal justice system unleashed a wave of criminals. It is now open season on the weak and innocent.

Few Americans know anything about agriculture, except to expect limitless supplies of inexpensive, safe, and nutritious food at their beck and call.

But that entitlement for 330 million hungry mouths requires massive water projects, and new dams and reservoirs. Farmers rely on steady supplies of fertilizer, fuels, and chemicals. Take away that support—as green nihilists are attempting—and millions will soon go hungry, as they have since the dawn of civilization.

Perhaps nearly a million homeless now live on the streets of America. Our major cities have turned medieval with their open sewers, garbage-strewn sidewalks, and violent vagrants.

So, we are in a great experiment in which regressive progressivism discounts all the institutions, and the methodologies of the past that have guaranteed a safe, affluent, well-fed and sheltered America.

Instead, we arrogantly are reverting to a new feudalism as the wealthy elite—terrified of what they have wrought—selfishly retreat to their private keeps.

But the rest who suffer the consequences of elite flirtations with nihilism cannot even afford food, shelter, and fuel. And they now feel unsafe, both as individuals and as Americans.

As we suffer self-inflicted mass looting, random street violence, hyperinflation, a nonexistent border, unaffordable fuel, and a collapsing military, Americans will come to appreciate just how thin is the veneer of their civilization.

When stripped away, we are relearning that what lies just beneath is utterly terrifying.

Victor Davis Hanson is a distinguished fellow of the Center for American Greatness and the Martin and Illie Anderson Senior Fellow at Stanford University’s Hoover Institution. He is an American military historian, columnist, a former classics professor, and scholar of ancient warfare. He has been a visiting professor at Hillsdale College since 2004. Hanson was awarded the National Humanities Medal in 2007 by President George W. Bush. Hanson is also a farmer (growing raisin grapes on a family farm in Selma, California) and a critic of social trends related to farming and agrarianism. He is the author most recently of The Second World Wars: How the First Global Conflict Was Fought and Won, The Case for Trump and the newly released The Dying Citizen.