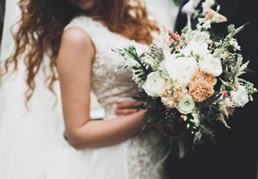 Who Should Define Marriage?

Listen to the audio

When considering anything in life, we must consult natural law. Natural law is simply the way “the laws of nature and nature’s God” set things in motion. There are natural laws of science, for human happiness, and even for good government.

Let’s consider natural law in relation to marriage. Benjamin Franklin emphasized the importance of marriage as he attempted to dissuade a friend from taking a mistress:

“Marriage is the proper remedy. It is the most natural state of man…It is the man and woman united that make the complete human being. Separate, she wants his force of body and strength of reason; he, her softness, sensibility, and acute discernment. Together they are more likely to succeed in the world. A single man…is an incomplete animal. He resembles the odd half of a pair of scissors.”

The construction of the family raises the basic question of the duty of the parents to the children. John Locke stated that the authority of parents over children is based on an important principle of natural law:

“The power that parents have over their children arises from that duty which is incumbent on them, to take care of their offspring during the imperfect state of childhood. To inform the mind, and govern the actions of their yet ignorant nonage, till reason shall take its place…the parents are bound to [provide].”

“The nourishment and education of their children [during their minority] is a charge so incumbent on parents for their children’s good, that nothing can absolve them from taking care of it.”

The Declaration of Independence states that Governments are instituted to protect rights. Governments do not issue rights, nor can they define rights. As Jefferson stated, rights are issued and defined by the “laws of nature and of nature’s God.”

Marriage was defined by those who engaged in it as a union between a man and a woman. They believed that Marriage was a natural right to bind the family unit, to make the gift of procreation and rearing children a covenant with each other.

If a man and woman wanted the natural right of procreation, like all rights, there would be duties attached to that right. The primary duty is to raise the children, to teach them the laws of nature and of nature’s God, and to instruct them on their own boundaries of liberty and the boundaries of government. The couple covenanted that they would sacrifice their entire lives to see their duty through—till death do they part!

That was marriage. It was not for the faint of heart. It was not only for the man and woman’s happiness, but to bind the family unit, and bind them to their exclusive and solemn duty of training their children.

Then people began to redefine marriage.

Marriage was originally MAN plus WOMAN, and it was performed within the family or within the churches.

Then the people decided they wanted government to keep track of marriages, so they let government redefine it to a MAN plus WOMAN plus LICENSE.

Then the people wanted laws to prevent interracial marriages, so they let government redefine it to MAN plus WOMAN (of the same race) plus LICENSE

Then the people did not want first and second cousins to marry so they let government redefine it as a MAN plus WOMAN (of the same race and not related) plus LICENSE.

The people realized that the race restriction in marriage was unjust, so they asked government to rescind the laws preventing interracial marriages. This redefined marriage as MAN plus WOMAN (not related) plus LICENSE.

In 1969 California became the first state to enact “no fault” divorce. That led to the definition of: MAN plus WOMAN (not related) plus LICENSE – MINUS any real BINDING COVENANT, DUTIES and RESPONSIBILITIES.

To no surprise, this contributed to a sharp increase in the divorce rate in the 1980’s so the people decided to redefine it again by adding tax breaks to encourage people to stay married: MAN plus WOMAN (not related) plus LICENSE – MINUS any real BINDING COVENANT, DUTIES and RESPONSIBILITIES, plus TAX BREAKS

Americans spent centuries letting government define and redefine marriage again and again. Now they have put courts in a tough position. Make a ruling based on two conflicting natural rights: first, the right to enter into the marriage covenant, and second, that all of the laws should be for all of the people all of the time.

The LGBTQ community does not desire to enter into marriage and the family unit according to traditional definitions, but they see that government is giving married couples an exclusive entitlement in the form of tax breaks. So, they go to government and say, “Hey, you are giving those people some free apples. We want some free apples too.” All of the laws are for all of the people all of the time. Now what are the courts to do?

Should it be any surprise that after decades of telling government to define and redefine marriage that they would take it upon themselves to redefine it again? If the people consent to government defining marriage, then they are declaring that they have the authority to define it. The problem with government defining marriage did not begin recently. The problem began long ago when people did not enforce government boundaries because at the time it suited them not to.

As with all things, we must put everything in its rightful place. Marriage must be placed back outside the bounds of government and back into the sole hands of the people.

The LGBTQ community should approach government to say “Hey, you are giving those people tax breaks and other benefits. That is not within your bounds. Stop giving them something we cannot have under equal law for all the people!” And those who support traditional marriage should join them in saying the same thing. Those tax breaks and benefits come at a high cost!

The best policy in a free nation is often no law at all, but leave it to the people to govern themselves, or as Jefferson stated, “That government is best which governs least, because its people discipline themselves.” This is often the best protection of our unalienable rights.

In the case of abuse and divorce, this is within the bounds of government. The very definition of abuse is the violation of unalienable rights and governments are instituted to protect those rights. If a child is harmed or neglected or a spouse is abused, that is violating a series of natural rights where government is rightfully mandated to engage.

The courts also give us an avenue to adjudicate our contracts—in this case marriage. Divorce proceedings in court can hold parties accountable to their duties associated with their contract.

The definition of marriage does not need to be on the books to protect unalienable rights or to adjudicate in the courts. There are many contracts that are brought to court that have no specific definitions within the law, but a judge will hear the case, nonetheless.

Let us bring the family back where it belongs—in the family. Bring it close to our superintending eyes. We will protect our families better than any law or policy. Jefferson wrote: “place under everyone what his own eye may superintend, that all will be done for the best.”