1st Amendment vs. The People

1st Amendment vs. The People 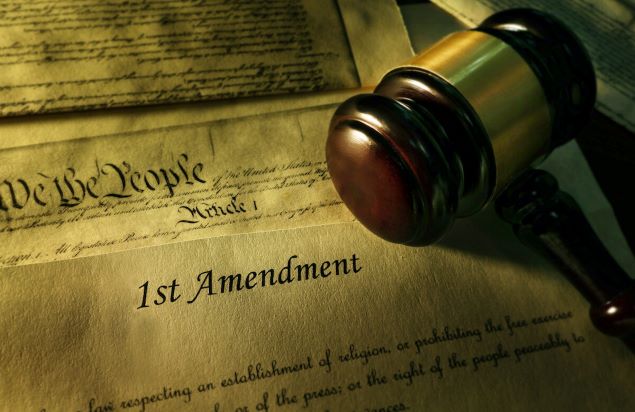 The First Amendment, as currently interpreted, lacks the strength to stop the censorship and other Stasi-esque goals of the deep state.

The release of internal communications in the ongoing series of “Twitter Files” reveals a government bent on propaganda and censorship—and a Big Tech industry willing to play along. With each new thread detailing the internal workings and cozy relationship between the Twitter team and our government, the political right screams louder of First Amendment violations.

The First Amendment cannot be the whole answer to the problem, however, and, in fact, may not have even been transgressed. Americans are right to be outraged, but the solution doesn’t rest in constitutional claims. The deepest solution is in a resurgence in the values of free speech and a free press.

“Twitter, The FBI Subsidiary” was the spot-on title independent journalist Matt Taibbi crafted for the thread he published two weeks ago detailing the hand-in-glove relationship between the FBI and Twitter. But as Taibbi’s Christmas Eve sequel, “Twitter And ‘Other Government Agencies,’” revealed, it wasn’t just the FBI using Twitter as a corporate underling, nor is it just Twitter the government appropriates for this purpose.

Rather, as Taibbi reported, the “Twitter Files” “show the FBI acting as doorman to a vast program of social media surveillance and censorship, encompassing agencies across the federal government – from the State Department to the Pentagon to the CIA.” Beyond Twitter, “Facebook, Microsoft, Verizon, Reddit, even Pinterest, and many others,” as well as “industry players also held regular meetings” with the government, Taibbi revealed.

The internal documents released by Twitter’s new owner, Elon Musk, also exposed the U.S. government’s use of Twitter, and by extension other social media giants, “to carry out a covert online propaganda and influence campaign” with the goal of shaping “public opinion in countries including Yemen, Syria, Iraq, and Kuwait.”

Courts May Not Find This a 1A Violation

These details—and more—revealed over the last month paint a disturbing picture of a cozy relationship between the federal government and private platforms. But they do not necessarily establish the government violated the First Amendment according to current jurisprudence. In fact, reading the internal communications against the backdrop of First Amendment jurisprudence indicates the federal government used care to avoid crossing the judicial line.

Here, Supreme Court Justice Clarence Thomas’s recent exposition on the First Amendment in the context of Twitter and other private entities provides a necessary constitutional backdrop.

“Although a ‘private entity is not ordinarily constrained by the First Amendment,’” Thomas explained, “it is if the government coerces or induces it to take action the government itself would not be permitted to do, such as censor expression of a lawful viewpoint.” “Consider government threats,” the originalist justice continued, quoting from Bantam Books, Inc., v. Sullivan, the controlling Supreme Court precedent on the issue: “People do not lightly disregard public officers’ thinly veiled threats to institute criminal proceedings against them if they do not come around.”

“The government cannot accomplish through threats of adverse government action what the Constitution prohibits it from doing directly,” Thomas continued. “Under this doctrine, plaintiffs might have colorable claims against a digital platform if it took adverse action against them in response to government threats.” But there were no threats alleged in the case on which Justice Thomas opined, leaving the issue for another day. Thomas added, though, that “what threats would cause a private choice by a digital platform to ‘be deemed . . . that of the State’ remains unclear.”

Reading the emails published in the “Twitter Files “against the backdrop of Justice Thomas’ synopsis of the First Amendment’s reach to social media platforms suggests the government may not have acted unconstitutionally in flagging supposed election misinformation. Not only did the government not threaten Twitter, but the emails reveal the FBI employed boilerplate language to avoid sparking a First Amendment case based on government threats.

“Twitter folks,” the typical email began, followed by, “Please see below list of Twitter accounts which we believe are violating your terms of service by disseminating false information about the time, place, or manner of the upcoming elections.” In general, the FBI then ended the emails by indicating the FBI had provided the information “for any action or inaction deem[ed] appropriate within Twitter policy.”

Such language indicates the FBI wanted to be seen as seeking cooperation, not coercion. Thus, under controlling precedent, the government alerting Twitter to what the FBI, Department of Homeland Security, or others believed constituted “misinformation” did not turn Twitter into a state actor.

The Courts Could Shift, But Haven’t

But the law is not there yet and may never be. Meanwhile, the federal government and its private partners have exponentially increased information-sharing and -gathering efforts, as well as censorship requests. The First Amendment, as currently interpreted, lacks the strength to stop the censorship and other Stasi-esque goals of the deep state.

Moreover, even in cases where federal actors crossed the constitutional line by threatening or otherwise coercing censorship, there is no effective legal recourse. Twitter and other social media outlets may remain silent, either fearing retribution or sharing the government’s objective. If the public even learns of the government’s misconduct later, the harm will be done, as with the FBI’s push for censorship of the Hunter Biden laptop story.

Further, in the context of social media censorship, it would be an unusual case in which an individual could establish an injury caused by the government’s First Amendment infringement. Also, even if someone could establish standing to sue, the statute of limitations, or the time period to sue, would likely have long since expired.

Social media companies that value free speech will ignore requests by the government or private actors to censor speech. Those running the platforms will not do so on their own either. And an American public that honors the principle of free speech and recognizes the intrinsic value of “the marketplace of ideas” will not only not demand speech restrictions but will condemn social media outlets that seek to silence opposing viewpoints.

Journalists and media outlets would scoff at government attempts to silence stories and instead expose the state actors attempting to interfere in the freedom of the press. If freedom of the press were instilled in the soul of journalists, they would see themselves as a check on the government and not accept, at face value, non-answers or claims of “misinformation” from bureaucratic mouthpieces.

Few Americans, however, value free speech, having cut their teeth on the belief that speech is violence. And too many journalists act as propagandists on par with the reporters serving the state-run media outlets of totalitarian regimes.

So-Called Journalists Are The Worst Offenders

Elon Musk’s purchase of Twitter exposed these truisms. His mere promise of free speech prompted immediate declarations that Twitter had descended into a platform of hate and would soon be dead.

Of course, these same folks have still yet to condemn Twitter 1.0 for suspending an entire newspaper for its accurate political reporting, and for blacklisting and shadow-banning conservatives. Beyond the hypocrisy, if supposedly educated adults really cannot understand that a private business censoring Musk’s location data to protect his two-year-old child isn’t a threat to a free press, they clearly have no understanding of the role of the media in a civil society.

That is not to say that reasonable people cannot disagree on the line drawing. Musk is indeed to blame for some of the backlash because he declared himself a “free speech absolutist” when he isn’t. Musk made that clear last month when he amended Twitter’s Terms of Service to make clear that “denying a violent event, such as Sandy Hook, the Holocaust, and the September 11th attacks” violated Twitter policy. You didn’t see the left-leaning media testing Musk on that molehill, though.

Folks, these are not serious people. They have no semblance of respect for free speech or freedom of the press.

Yes, even with free speech norms there will be disagreements and debates: Should a media outlet, including Twitter, temporarily delay the publication of a story on U.S. troop movements? Should Twitter ban the sharing of a story, say, that George W. Bush skirted his National Guard duties, when government officials tell Twitter they are 100 percent sure it is false information based on fake documents? Should the government even tell Twitter that?

Should Twitter voluntarily give the government, without a warrant, information on sex traffickers? What about tax cheats or insider traders? Should Twitter meet with the government regularly to learn about Russian bot farms in other countries designed to cause internal strife? What about banning foreign actors seeking to influence our elections with false information?

What if the information is true, but China seeks to promote the stories to ensure its preferred candidate wins the presidential election? Or what about the United States doing the same to influence the elections in other countries?

What about allegations that Iran is using social media to groom troubled children into school shooters? Should the government share that intel with Twitter and other social media companies and, if so, what should the platforms do? And how proactive should Twitter and others be to censor communications that fit the pattern of “grooming” youth to attack schools even before they reach the stage of violence?

The hypotheticals are unlimited. But in 99 percent of the cases, where free speech and a free press are valued by both the users and the private decision-makers, the answers fall within the clear “I know it when I see it” category of either permissible speech or advocating or threatening violence. Since Americans no longer cherish those values, we are seeing what the “Twitter Files” expose—censorship of everything from profoundly important political speech to silly satire.

First Amendment jurisprudence won’t save the day. Only a resurgence of respect for the values underlying that constitutional amendment will.

Margot Cleveland is The Federalist’s senior legal correspondent. She is also a contributor to National Review Online, the Washington Examiner, Aleteia, and Townhall.com, and has been published in the Wall Street Journal and USA Today. Cleveland is a lawyer and a graduate of the Notre Dame Law School, where she earned the Hoynes Prize—the law school’s highest honor. She later served for nearly 25 years as a permanent law clerk for a federal appellate judge on the Seventh Circuit Court of Appeals. Cleveland is a former full-time university faculty member and now teaches as an adjunct from time to time. As a stay-at-home homeschooling mom of a young son with cystic fibrosis, Cleveland frequently writes on cultural issues related to parenting and special-needs children. Cleveland is on Twitter at @ProfMJCleveland. The views expressed here are those of Cleveland in her private capacity.