Due to the Resurrection

Due to the Resurrection 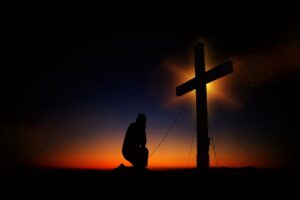 It’s Because Of The Resurrection That The Culture War Matters

Gone are the days when politics focused mostly on arguments about defense budgets, tax cuts, or the gold standard. Today, it seems like each new hot-button political issue is infused with more and more spiritual significance — and spiritual threat.

Left and right aren’t just debating whether kids would benefit from government-subsidized preschool; they’re waging a war over whether children should be groomed to hate their divinely designed bodies and biological telos and reject both for deceitful promises that mutilating their organs will bring self-satisfaction.

In tandem, society is grappling with whether children should be raised and disciplined by their parents or by representatives of the state. Our culture tells young people that marriage is oppressive and that having children is a blot in the way of self-actualization, and my generation is listening.

We’re fighting over whether a mother should be legally allowed and socially encouraged to kill her baby — and the pro-abortion side is no longer chanting “safe, legal, and rare” but openly trying to legalize the murder of full-term babies who survive botched abortions.

We’re embattled with a false gospel that says the evils of this world are not caused by the rebellion of mankind against his Creator but by “inequities” that could be solved with enough reverse discrimination. Rejecting God, our post-liberal society has constructed its own religion with mortal sins, repentance, and faux justice — but no grace.

The culture war matters in ways that are more obvious, and more theologically drawn, than ever before in our collective memory.

“The world passeth away, and the lust thereof,” we’re reminded in 1 John 2:17. Some Christians, most famously in the fundamentalist movement of the early 20th century, have taken this truth as notice not to waste our efforts on influencing our political or cultural regimes. Our eternal salvation is secure, and it’s true that no presidential election or policy platform can endanger that or bring it about.

We do well to remember that our fight is not for earthly power — nor is it against earthly powers. But we make a similarly grave mistake if we let our own salvation coddle us out of caring for the souls around us.

Our great commission is to evangelize, to bring the gospel to all people. No cultural-political fight should ever replace that calling.

Yet part of proliferating that gospel is defending parents’ freedom to instruct their own children in it. It’s ensuring that a baby gets the opportunity to be born, to experience a human demonstration of God’s love from his parents, and to allow the knowledge of Christ to live in his heart. It’s advocating for pastors’ ability to speak the truth to their flocks.

It’s protecting children, the likes of whom Christ himself took into his arms and blessed, from lies that rejecting your sex and deforming your body will fix your soul. That lie is straight from hell, as is anything that promises to offer what only Christ can give.

It’s speaking out against false gospels and false prophets, who say that our sin stems not from rebellion against God but from the Marxist power struggle of man against his fellow man, and can be redeemed not by God’s sacrificial mercy but only by racial reparations and self-flagellating.

The Bible doesn’t command Christians to run for office or to vote. But it does command us to hold fast to what is good, to love one another as Christ has loved us, and to beware of false teaching.

When we see what Paul in Ephesians calls “spiritual wickedness in high places” using political tactics to tear down the example God has established of his own love in the family, to urge salvation-seeking people to seek spiritual fulfillment in rejecting their created selves, or to teach children to hate each other based on their skin color, we should certainly rally against it — not in spite of our heavenly citizenship but because of it.

If Christ had never risen, our sins would still enslave us, and we would have no hope to cling to when we face evil. Any battle we fight in this life would have no consequences except to decide a violent earthly power struggle. But because Christ is risen, we engage with evil in this world with the hope that Christ might use us as instruments in his salvation of souls, for his glory and our good.

Elle Reynolds is an assistant editor at The Federalist, and received her B.A. in government from Patrick Henry College with a minor in journalism. You can follow her work on Twitter at @_etreynolds.