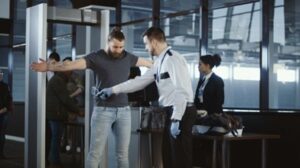 Why You Shouldn’t Celebrate the TSA for Employing 47,000 Workers

The lump of labor hypothesis—that there are only so many jobs “out there”—is a fallacy.

I recently took an airplane trip, departing from a medium-sized city. There must have been, oh, at least 100 Transportation Security Administration (TSA) employees who were officiating at the boarding process: checking our luggage, ensuring our shoes were removed, delving into our underwear, stealing our toothpaste, pushing us through those x-ray machines. There were literally hordes of them mucking about. (In 2020, the latest year for which such figures are available, the TSA employed more than 47,000 people and had an annual budget of approximately $7.7 billion.)

Why were they there? Years ago, matters were far more simple; you showed a boarding pass, and just got on the plane.

What changed? In a word, terrorists. They hijacked planes and used them in suicidal attacks during the 9-11 attacks in 2001. The TSA workers were there to ensure that no one smuggled any bombs on board, or interfered with flights in any other destructive manner.

Did these terrorists, inadvertently from their perspective of course, actually do us a favor? After all, thanks to the TSA, almost 50,000 American jobs were created. Were these folk not working for this government agency, perhaps they might all be unemployed. If so, our unemployment rate would be significantly higher than it is at present. Do we thus owe the terrorists a vote of thanks? Not, of course, for murdering innocent air travelers, but, at least, for helping out our economy?

Rather, instead of partially hurting and partially helping us, they are actually doing damage to us in both regards. How so? This can easily be demonstrated. Suppose that there was never any such thing as terrorists, certainly not involving airplanes. There would then of course be no need for the TSA. (There is no need for them even now; this function would be better provided through private enterprise, but that is an entirely different matter.)

What, then, would all these people be doing? We cannot know for sure, but we can speculate. Presumably, they would be butchers, bakers, candlestick makers, farmers, fishermen, doctors, scientists, cooks, and bottle washers. In short, they would be producing more of these ordinary goods and services. Possibly, some of them would be breaking new ground, providing the rest of us with things we cannot now even imagine. Without terrorists in existence we could have had our cake and eaten it too: have just as much air safety as at present (or more! The TSA is hardly 100 percent efficient), plus a plethora of other wealth that these folk would be creating in other industries.

Economic logic demonstrates the truth of this claim. The economic pie is not fixed. The lump of labor hypothesis—that there are only so many jobs “out there”—is a fallacy. The people who were once TSA employees bring with them not only brains, arms, and heads with which to work, but also eyes and stomachs which lead to consumption. They supply labor and demand products. As long as we want more goods and services than we already have—that is, as long as there is still scarcity—there will be room for more employment and additional GDP.

Economic history also attests to the fact that the terrorists are hurting us twice over. When World War II ended, some 12 million soldiers left the armed forces and entered the labor force. They put down their guns and picked up their plows. One result of that was the post-war boom, with far greater productivity than before.

At one time in our history, some 98 percent of the population was needed on the nation’s farms. The present figure is more like 2 percent. From whence did all those new jobs arise? They did so from the fact that people wanted more than they already had and were willing to work to obtain additional wealth.

Yet another historical episode occurred when, due to the advent of the horseless carriage, vast unemployment took place amongst blacksmiths, whip and saddle makers, horse trainers, horseshoe manufacturers, and such. Again, a far more significant proportion of the labor force than now accounted for by the TSA shifted from these horse and buggy industries to completely different ones.

The terrorists have landed upon us a one-two punch in the gut. Danger in the air and poverty too.

Walter Edward Block is an American economist and anarcho-capitalist theorist who holds the Harold E. Wirth Eminent Scholar Endowed Chair in Economics at the J. A. Butt School of Business at Loyola University New Orleans. He is a member of the FEE Faculty Network.