State legislatures are our last hope

The Millennium Tower rises 58 stories above downtown San Francisco. Built in 2008 on a dense sand foundation, instead of bedrock, it is sinking and leaning. It became apparent within two years that something was dreadfully wrong. It has been self-destructing since. Engineers, architects, and builders ignored the risks of not sending foundation pilings down to solid rock. 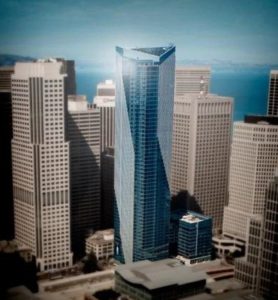 America was built on a different foundation: the rock base of 1776’s Declaration of Independence and the 1787 Constitutional Convention. It was created by the people through their colony/states. It has stood strong for over two centuries, not a few years. However, a few cracks and shifting have provided evidence of a weakened foundation. Just like the Millennium Tower in San Francisco, we have the ability and the responsibility to repair our nation’s basic structure. And a growing number of people want to partner with the states to make that happen.

Our founders designed Article V to remedy the Constitution they knew contained foibles. The weaknesses we recognize today require an effort that include ‘constitutional integrity’ above Congress’ capability. Not policy issues, but foundational issues that have caused increasing disunity, loss of liberty, security, and trust. 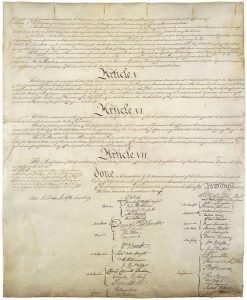 Each of America’s crisis (war, depression, pandemic) has ‘ratcheted’ the nation larger in size and deeper in debt. If that was not enough, we have allowed Branches to rewrite portions of the Constitution to fit political needs both legitimately, (17th Amendment-an error in judgement?) and illegitimately (abuse of the commerce, welfare, and other clauses).

These factors have neutralized the two basic foundational components of the Constitution: republicanism and federalism. That is, individual liberty and the responsibility for it and the equal sharing of power between the states and national government.

State legislatures were central to our founding and as such, they offer the only choice for rendering a solution to save our federal republic. A brief review of our origins might clarify.

To many Americans, the United States magically appeared on July 4, 1776. The reality is the creation of its foundation began at least a century and a half before America’s founding era (1750s – 1790s).

Immigrants arriving in America in the early 1600s found a hostile land after fleeing persecution and crossing the dangerous Atlantic. The colonist’s motives were simple: self-defense and religious freedom; in short: security and liberty. Those motives have been with us since.

From a process that evolved over the millennia of people gathering, proposing ideas, debating, and consensually agreeing on solutions over issues such as trade, security, and Indian negotiations. Conventions evolved from people gathering as families, neighborhoods, congregations, communities, and fellowships of all types.

Many conventions were held in British America’s 1600s. For example, 1620 (Mayflower Compact), 1639 (Fundamental Orders of Connecticut’s constitutional convention) and 1765 (Stamp Act convention). Many thousands of conventions occurred in towns, regions, and nationally over the centuries, the last one in 2017 (Arizona BBA Rules convention). Historians have identified nearly 700 recorded American conventions over the last four centuries.  Alexis Tocqueville equated people joining these associations as the basis for citizenship.

The early economy was based on mercantilism, a chaotic and unsettled system. It was a scheme whereby countries accumulated wealth (gold, silver) through unbalanced trade: large amounts of exports with extremely limited imports. Governments considered this system beneficial for the general good while ignoring individual self-interest.

America was required to supply raw materials to England for conversion into finished goods only to be exported back to the colonies for sale. Mercantilism in America was constrictive and frustrating for the colonists.

Americans were paying attention to the Industrial Revolution, Enlightenment, and entrepreneurism evolving in Europe. They were influenced by philosophers such as John Locke who argued for a clear relationship between the state and individuals, the rule of law, and property rights for all.

By the 1770s loyalty to the realm began to fade as increasing tax Acts to pay for England’s war debt began to jade Americans. Governors also ignored assembly requests for parity and representation. England stiffened, instituting more regulation and military, and forcing colonists to quarter their soldiers.

A month before the Second Continental Congress was to meet, fighting erupted in Concord and Lexington, igniting the Revolutionary War.

Meeting in Philadelphia (May 10, 1775), the Second Congress now focused on assembling an army, finding someone to lead them to Massachusetts, declaring independence, writing a constitution, developing allies, establishing civil governance in the colony/states, and winning a war. Delegates acted as an ad hoc committee that quickly morphed into a de facto national government as it birthed a new nation over the next six years.

The economy was driven by outsiders and the colonies created their own monetary policies; there was no treasury to pay for the war; liberty and therefore security were slipping away, and they were at war with the world’s largest and most sophisticated military machine in history.

By January 1776, there was no legal power in the colonies. After declaring Independence in July, state assembly legislators were left in a lurch without the people’s adversarial target: The Crown or Parliament.  Civil and administrative authority disappeared. With no defined mission, the rudderless assembly legislators began writing laws willy-nilly, further frustrating the colony/states.

The ideas developing in Europe encouraged Americans to significantly change their general attitude toward conventions and constitutions. The people trusted their assemblies to write law, but not to write a constitution that could be amended by them. The frequency of conventions increased as an opportunity to propose ideas and debate rose.

Calls within the states for constitutions increased. The Second Continental Congress recommended that constitutions be adopted by the new nation and all the states themselves. Shortly after Independence, 11 of 13 state conventions wrote constitutions.

1781 marked the end of fighting and the ratification of the Articles of Confederation.

After 1781, the post-war misery intensified as the weaknesses of the Articles of Confederation became apparent: Congress’s inability to raise taxes, inability to regulate commerce, each state had one vote regardless of size, laws required ¾ majority vote, amendments required a unanimous vote, no national court, no executive, and states could levy tariffs on each other.

The ongoing mercantile issues, boycotts, foreign and domestic trade matters, individual state sovereignty, growing foreign debt (France, Holland, Spain) added to the melee. There was next-to no revenue, interest on debt growing, defaults on some debt, rebellions (Shay’s Rebellion), and high inflation all driving the country toward chaos and collapse.

By the mid-1780s, Americans grasped the idea that they could create and change a constitution. Sentiment to elevate the purpose of ordinary conventions over legislatures and to equate them with ‘constitutional integrity’ was popular. The people saw a constitution as the fundamental law to define their liberty and security. It would codify how much they were willing to give up. They were to be the master and the government was to be the servant. And it was to be based on nature’s Creator with rights for all.

Thomas Jefferson observed in the 1780’s, “that to render a form of government unalterable by ordinary acts of assembly, the people must delegate persons with special powers. They have accordingly chosen special conventions to form and fix their governments.”

Calls for revision and even reform of the Articles and government grew. State conventions met regularly. Conventions met in Philadelphia, Boston, and Hartford in 1780. In Providence in 1781. At Mt. Vernon in 1785. Annapolis in 1786 was crucial as it contemplated a convention that would propose changes “to render the constitution of the Federal Government adequate to the exigencies of the Union.” A few months later, Virginia followed up with the same “call” as did New Jersey.

Beginning in May of 1787, 55 commissioners from twelve states met in Philadelphia for four, hot and sultry months to reform their broken and failing nation. Madison said afterward of his fellow delegates: “They accomplished a revolution which has no parallel in the annals of human society. They reared the fabrics of government which have no model on the face of the globe. They formed the design of a great Confederacy, which it is incumbent on their successors to improve and perpetuate.” Emphasis added.

The Founders recognized the new Constitution was not perfect and relied on the people and states to watch over it. Congress’s ability to propose amendments was not a part of the Constitution until the last week of the Convention. The Founders had originally intended for the people and states to use the well-established and respected convention process used over the previous one hundred and eighty years.

The Founders gave us Article V with an amendment choice: the states in convention or Congress. Since then, Congress has proposed changes to the Constitution nearly twelve thousand times, with 33 successes. Of those, the states and people have approved twenty-seven.

The states have met in convention a recorded 648 times for various reasons. Since 1788, 49 states have submitted two or more amending applications for a total of 437 tenders. Two conventions produced proposed amendments that did not make it to ratification: 1814 (Hartford CT) and 1861(Washington DC).

Individually, we must come together and follow in their footsteps. It is incumbent upon us to use the tools they gave us to return our wayward government to a limited federal republic of, by, and for the People and to reassume the powers to which the laws of nature’s God entitled them.

The engineers, architects, and builders of our Constitution were the people and state legislators of the founding era. Like the rebuilders of the Millennium Tower in San Francisco, we the people and our state legislatures have an obligation to live up to the Founders magnum opus by taking responsibility for mending our Constitution. Individually, together.

Michael Kapic is retired and lives in Arizona with his wife of 55 years. He’s a graduate of Auburn University, managed engineering and manufacturing facilities throughout his career. He is an AMAC Delegate to AZ CD-08, past-State Director of COS Project, and is editor of HuntForLiberty.com and author of Conventions That Made America: A Brief History of Consensus Building.