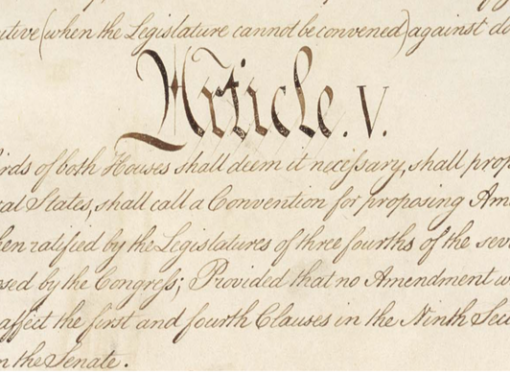 Senator Schuerer says, “Such a convention would likely be a series of official meetings where commissioners from all fifty states gather to discuss ideas, debate solutions, and propose amendments to the United States Constitution.  Then we the people, through our elected representatives, will be able to consider and approve the solutions.  Amendments proposed by the convention would require ratification by three-fourths of the states to take effect.”  Read his opinions HERE.

His proposals include: Term Limits for Members of Congress (HJRes6), a No Budget, No Pay act, and a Balanced Budget Amendment (HJRes8).  He said he will also be offering a series of other “reform” bills.  Read about his proposals HERE.

Buchanan said he will be renewing his call for a constitutional amendment to ensure a balanced budget, backed with his “No Pay Raise for Congress Act” which would ensure members of Congress would not be eligible for pay raises if they fail to pass a balanced budget.  His proposals did not have bill numbers at press time.

Actually, the 117th Congress already has three resolutions filed which call for a constitutionally-mandated balanced budget (HJRes3 with 28 co-sponsors, HJRes8 and HJRes13).  All are exclusively backed by Republicans.  The 116th Congress saw a dozen such resolutions filed.  None of these proposed constitutional amendments stand a ghost of a chance of moving forward.  But they keep the folks happy back home.

Meanwhile, BBA activist Mark Guyer is quietly working to motivate legislators in Idaho, Montana and South Carolina to adopt resolutions calling for a convention of states that would propose a balanced budget amendment to the Constitution.

At the start of the new year the Committee for a Responsible Federal Budget (CRFB) reported that the national debt is now larger than the economy (GDP).  CRFB also released their “Top 20 (Debt/Deficit) Charts for 2020.”  Find them HERE.

A related opinion piece in the Bangor (Maine) Daily News says We’ve stopped caring about the deficit.  The author, Matthew Gagnon, the CEO of the Maine Policy Institute, doesn’t really believe that sentiment.  Rather, he asks, “When, exactly, did we stop caring about the national debt?”  Read his thoughts HERE.

Missouri State Senator Eric Burlison has introduced SCR4, another effort aimed at getting Missouri to join the other 15 states which have adopted CoSP applications.

The report claims the bill was authored by 8 House Democrats.  It is reported to seek the addition of 7 new sections to the Constitution.  Read the proposal HERE.

The American Legislative Exchange Council (ALEC) has developed a model application for state legislators to use to seek an Article V convention of the states that would propose the Keep Nine Amendment.  A copy of that model application is HERE.

SIDE NOTE:  On January 27 Buhler reported that Google had blocked the ads placed by the Keep Nine campaign.

In his article Watson outlines the steps that ERA advocates have taken in recent years, and the steps current members of Congress are taking.  Those actions still don’t deal with the question of several states having rescinded earlier ratifications.  Read his analysis HERE.

Meanwhile, on January 22 the Outside the Beltway blog published a related story by James Joyner entitled Congress Pushing to ‘Ratify’ ERA by Fiat.  He points out that a bipartisan effort in the US Senate is supporting the US House drive to eliminate the 7-year (later extended an additional 3 years) deadline for ratifying the 49-year-old ERA proposal.  Read it HERE.