Who votes means nothing. “What is extremely important is who counts the votes, and how they are recorded.”

As soon as the quote went viral, the media’s fact checkers tried to suppress it.

USA Today’s fact checker rated it as false, claiming that Stalin had never said it based on speaking with two history professors at Vanderbilt University who vowed that they never heard of it. One of the professors, who serves as the Director of Undergraduate Russian and East European Studies, ranted that it was, “an example of American right-wing paranoia, active manipulation of public opinion, or outright and fascism”.

Truly a quote worthy of Stalin.

But had the ‘fact checker’ and the professors just checked Oxford’s Essential Quotations, they would have found it. You don’t need a PhD or a fact checker title: just a modicum of integrity.

Politifact was more ambitious about humiliating itself by contacting the Stalin Digital Archive with the Russian State Archive of Social and Political History. The quote wouldn’t be there because it comes from Stalin’s former secretary, Boris Bazhanov, who fled the USSR and wrote a memoir exposing the crimes and corruption of the Soviet regime. Asking the Russian State Archive for that quote is like asking the cosa nostra to fact check a mafia informant’s recollections.

The men who were party to that conversation were the ‘Troika’ of Central Committee leaders, Kamenev, Zinoviev, and Stalin, who temporarily governed the USSR after Lenin. Since Stalin had Kamenev and Zinoviev killed, his secretary was one of the few to hear him say it.

Because that is exactly what Stalin did.

Boris Bazhanov had worked as Stalin’s private secretary and, unlike most of the murderous Communist dictator’s associates, survived by escaping before he could be killed. Still a young man in his twenties, Bazhanov had seen too much and enough to know what was coming. On New Year’s Day, he fled across the border from Turkmenistan to Persia, then through India, surviving several assassination attempts along the way, before finding refuge in France.

Bazhanov’s memoir about his time with Stalin had several titles, it’s named Bazhanov and the Damnation of Stalin in English, but all of the versions lay out the damning story of how Stalin took over the Soviet Union by manipulating the system and ruthlessly purging his rivals.

What’s more remarkable than the quote related in Bazhanov’s memoir is its context. 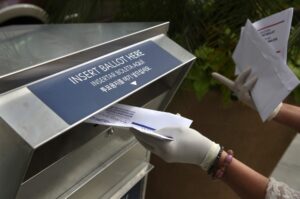 The Soviet Union had arrived at a crucial moment. Communist economics had managed to fail in a matter of years. The Troika were overseeing a collapsing economy that had married socialism to the Czarist bureaucracy and its police state with terrible results leading to a surge of discontent from local labor and political organizations against Moscow’s centralized control.

“And you, Comrade Stalin, what do you think of this question?” Kamenev asked Stalin.

“What,” Stalin replied, “of what question?”

“Of the question of capturing the majority of the Party,” Kamanev said.

“Do you know what I think about this?” Stalin replied, “I believe that who and how people in the Party vote, is unimportant. What is extremely important is who counts the votes, and how they are recorded.”

The quote, despite the attempts to suppress it with Stalinists fact checking Stalinism, is indeed real. But what’s more important is what Bazhanov relates happened after this conversation.

Stalin’s response was to take control of Pravda and fake the results of the votes.

I’ll let Bazhanov tell the rest of the story without any more interruptions.

“Naturally, a cell whose election results were erroneously reported protested, phoning Pravda and asking for the section ‘Party Life.’ Nazaretian would politely respond and promise to verify immediately. The verification would show that ‘you are perfectly right, there was a regrettable error, the printers made the mistake. They’re overworked, you know. The Pravda editors apologize. We will print a retraction.’ Each cell thought that its error was unique, for that cell alone, and was unaware that it had happened to most of them. Meanwhile, little by little the impression went around that the Central Committee was winning all along the line. The provinces became more prudent and began to follow Moscow, i.e., the Central Committee.”

Much like all the clerical errors and bad polls that began piling up during the 2020 election.

What Stalin meant was that the actual vote didn’t matter, when controlling the news also gave him control of how the election was reported. The actual votes could be tallied somewhere out there, but Pravda would report that there was a consensus in favor of the Central Committee.

Pravda would even pretend to be transparent by printing occasional corrections to create the impression that it was trustworthy, while the big lie of the election rolled on. That’s where the Soviet Pravda was ahead of the American Pravda which rarely even bothers with corrections.

When Stalin said, “who and how people in the Party vote, is unimportant,” but “what is extremely important is who counts the votes, and how they are recorded”, he was referring to the media.

Some might call it a historical irony or tragedy for a leftist media to try and suppress a quote whose import was that a leftist media can manufacture an election consensus by printing lies.

Stalin understood that elections without safeguards were merely procedural. The results of the election didn’t matter. All that mattered was what people believed because they had read it.

The New York Times, the Washington Post, USA Today, CNN, and the rest of the tottering infrastructure of the media exist to manufacture partisan narratives to secure political power. Like their Stalinist counterparts, they invert the meaning of terms so that ‘fact checking’ becomes suppressing facts, and the more they lie, the more they claim to stand for the truth.

But, Pravda was there first.

The 2020 election was rigged in multiple ways, but the most obvious one was messaging.

Big Tech monopolies and the media collaborated to spread Democrat narratives and suppress Republican ones. In the crucial pre-election period, the media’s lies, smears, and hit pieces against President Trump and Republicans became the only thing most people saw anymore. Scandals involving Hunter Biden were suppressed, ironically, as Russian disinformation, while the media shamelessly propagandized for Biden the way that Pravda had for Stalin.

The media was instrumental in claiming victory for Biden and in helping Democrat governors and secretaries of state orchestrate the illegal election rigging that changed election rules.

The trouble with the Pravda approach is that it only works for a limited amount of time. Stalin only needed it to work for a brief period until he had consolidated his power over the system. Pravda’s credibility only needed to last long enough for Stalin to be able to freely kill his rivals.

America’s Pravda has shot its credibility. Every time public trust in the media hits a new low, the media doubles down on the propaganda, the smears and the lies. In under a generation, the media has destroyed its business model and the credibility that it took centuries to build.

If the media knew anything about history, it would not only have been able to verify the Stalin quote, but it would also know that what it’s doing is a bad idea that can only end badly. .

Nazaretian, who had been assigned the task of doing Stalin’s dirty work, rigging the election at Pravda, was killed along with the two members of the Troika, and much of the old Bolshevik establishment in The Great Purge, for being a propagandist who knew too much.

The media might want to learn a lesson from Nazaretian’s example as they lie for their radicals.

Daniel Greenfield, a Shillman Journalism Fellow at the Freedom Center, is an investigative journalist and writer focusing on the radical Left and Islamic terrorism