Time to Return to the Sons of Liberty? 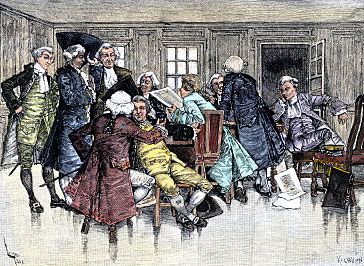 The origins of the “Sons of Liberty”

On this day in 1765, the term “Sons of Liberty” is used in a letter written by Jared Ingersoll, Sr. The term would soon be adopted by many American patriots, and these “Sons of Liberty” would fight against British tyranny.

Perhaps most memorably, of course, the Sons of Liberty were responsible for the Boston Tea Party!

“The [American] people, I believe, are as truly loyal as any subjects the King has, but a people jealous of their liberties and who will vindicate them, if ever they should be violated.” Col Isaac Barre (speech in the House of Commons, February 6, 1765)

Ingersoll’s letter was written from London, where he had just witnessed a debate in the British House of Commons. That body was then debating the wisdom of enforcing a Stamp Act in the American colonies. As the debate revealed, some members of Parliament viewed Americans as dependents who must comply with the mother country—apparently for our own good!?

Prime Minister George Grenville began by declaring that while Americans “remain dependent, they must be subject to our legislature. . . . They have in many instances encroached and claimed powers and privileges inconsistent with their situation as colonies.”

But the icing on the cake came from another member, Charles Townshend, who spoke quite scornfully of our ancestors: “And now will these Americans, children planted by our care, nourished up by our indulgence until they are grown to a degree of strength & opulence, and protected by our arms, will they grudge to contribute their mite to relieve us from the heavy weight of that burden which we lie under?”

Townshend’s speech prompted a third member of Parliament, Col. Isaac Barré, to stand up and defend us. Barré’s response to Townshend was scathing, and it would introduce the phrase “Sons of Liberty” for the first time:

“They planted by your care? No! your oppressions planted them in America. They fled from your tyranny to a then uncultivated and unhospitable country . . . . They nourished up by your indulgence? They grew by your neglect of them: as soon as you began to care about them, that care was exercised in sending persons to rule over them . . . men whose behavior on many occasions has caused the blood of those Sons of Liberty to recoil within them . . . .They protected by your arms? They have nobly taken up arms in your defense . . . . The people I believe are as truly loyal as any subjects the King has, but a people jealous of their liberties and who will vindicate them, if ever they should be violated.”

Apparently, Barré spoke so forcefully that the entire House sat back, stunned and silent for a bit afterwards.

Despite the stirring speech, the House of Commons ended up approving the Stamp Act. Barré was soon proven right, however. The Americans were “jealous of their liberties” and would “vindicate them” in the years to come.

Excerpts from the debate can be found HERE.

Posted in Sons of Liberty,tyrannical government and tagged American History,Education,Government