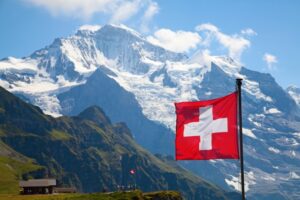 Since I’m a big fan of spending caps, I’m very happy to be in Zurich as part of the Free Market Road Show.

Switzerland’s spending cap (called “the debt brake“) is probably the best system in the world. It does have an escape clause for emergencies, so the government did increase spending during the pandemic.

But as this chart illustrates, Swiss lawmakers were much more responsible than their American counterparts. Over the past few years, IMF data shows that the national debt (as a share of GDP) increased by about 3.4 percent in Switzerland compared to 12.8 percent in the United States. 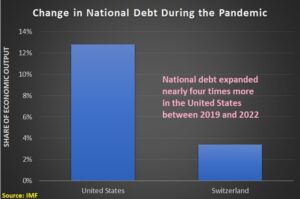 Indeed, as reported by Le News, Switzerland already is going to be back to fiscal balance by the end of this year.

The Covid-19 pandemic plunged Switzerland’s budget into the red in 2020 and 2021. The federal government expects to return to normality with a balanced budget in 2022. …In 2022, the federal government expects to spend CHF 0.6 billion less than it collects. …the government is aiming for an ordinary operating surplus of CHF 1 billion. Past budget surpluses may also be applied to the accumulated deficit to bring the accounting into line with the debt brake rules.

If you want to know why there such quick progress, one of the big banks, Credit Suisse, recently analyzed the nation’s fiscal status and explained how the debt brake requires future spending restraint to compensate for the emergency spending during the pandemic.

As part of the pandemic response, the Federal Council approved fiscal measures of over 70 billion Swiss francs… As a result of the debt brake, this deficit should be offset in the immediate following years. …the Federal Council announced that it would classify the majority of the fiscal measures as extraordinary spending. Under the law, this can be paid back more slowly – specifically, within six years. Additionally, with the escape clause, the Federal Assembly has the option of extending the repayment deadline even further in special cases.

Another international bank, ING, also issued a report about the country’s spending cap and actually expressed concern that the level of government debt is too low.

The main cause of Switzerland’s low indebtedness is a mechanism introduced by the Confederation to stabilise the federal debt: “the debt brake”. Enabled in the Constitution since 2003, with a population approval rate of 85% in 2001, the rule has strong legitimacy and many cantons have introduced similar models. The principle: public spending should not exceed revenues over a full economic cycle. The formula allows for a deficit during a recession, offset by surpluses during an expansion period. …the implementation of this system has resulted in a significant debt reduction, rather than just stabilisation. This is because the rule is applied asymmetrically and expenditure tends to be overestimated each year, while revenue is systematically underestimated. …every budget surplus is greeted with a self-congratulatory round of applause on the sound management of public finances.

Here’s a chart from the article showing on government debt began to decline once the spending cap was implemented. By contrast, debt in other industrialized nations has continued to climb. 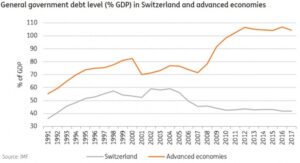 Keep in mind, by the way, that this chart was before the pandemic.

Given Switzerland’s more prudent approach, the gap between the two lines is even higher today.

P.S. If you want a more in-depth discussion of how Switzerland’s de facto spending cap operates, there’s a very good article in the Swiss Journal of Economics and Statistics. Authored by Tobias Beljean and Alain Geier, the 2013 study has a lot of useful information.

…the success is not just visible in figures – it is also evident in the way that the budget process has changed. The debt brake has turned the budget process upside down. Previously, spending intentions were submitted by individual government offices, and it was very difficult to make changes to a large number of budget items during the short interval between the first consolidated budget plan (largely influenced by government offices) between April and the final budget proposal in June. More problematic still, the finance minister faced the potential opposition of six “spending” ministers, who were each looking for support to get their policy proposals into the budget. The budget process is now essentially a top-down process, in which targets are set at the beginning of the process and then broken down to individual ministries and offices. …One key aspect is the fact that the debt brake sets a clear target for the deficit and expenditure. …the (risk-averse) administration tends to plan its spending cautiously so as to not exceed the limit of the credit item. Hence, actual outcomes are mostly below spending limits and are not compensated for by occasional overspending and supplementary credits. The consequence for overall spending is a systematic undershooting of expenditure with respect to the budget. … This “revenue brake” and the “debt brake” taken together now result in a framework similar to an expenditure rule, as it is rather difficult to meet the requirements of the debt brake through revenue-side measures – at least in the short term.

P.P.S. You can also read a couple of good summaries (here and here) from the Swiss government’s Federal Finance Administration.

P.P.P.S. Hong Kong also has a spending cap, and Colorado’s Taxpayer Bill of Rights is a spending cap as well. You can click here to watch informative video presentations about the various spending caps.