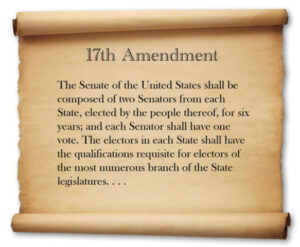 The 17th Amendment and Direct Election of Senators

The 17th Amendment transferred elections for the U.S. Senate from the state legislatures to the general electorate. It thus changed legislative election to direct election. The amendment resulted from a decades-long public campaign to persuade Congress to formally propose it. Congress did so only after 29 or 30 state legislatures applied for an amendments convention to bypass Congress.

Once Congress finally acted, the necessary three-fourths of the state legislatures ratified it in less than 11 months, completing the process on April 8, 1913.

The amendment reads in part as follows:

“The Senate of the United States in each State shall have the qualifications requisite for electors of the most numerous branch of the State legislatures.”

With one exception, the measure rendered shall be composed of two Senators from each State, elected by the people thereof, for six years …. The electors Senate elections subject to the same rules as House elections. The exception is that Congress may not override state laws fixing the “Places” for Senate elections, as it may for House elections. (See U.S. Constitution, Article I, Section 4, Clause 1.)

The amendment also provided that state law would determine whether governors can fill Senate vacancies pending a new election.

Should the 17th Be Repealed?

Some conservatives favor repealing the 17th Amendment. They argue that (1) the Constitution’s framers provided for state legislative election to protect the states, (2) the Progressives proposed the amendment to destroy federalism, (3) once the amendment was passed, protection for the states was lost, which (4) caused the federal government’s explosive growth.

Before researching the question, I tended to agree with some of these claims. Several years ago, however, I investigated the history and effect of the 17th Amendment. I consulted George H. Haynes’s classic books and articles on the Senate, as well as dozens of research articles by scholars across the political spectrum.

Here’s what I learned:

The Framers’ Reasons for Legislative Election

Some of the Constitution’s framers saw legislative election of senators as a way to protect the states. John Dickinson in particular contended that legislative election would enable the states to serve the same role baronies served in the British House of Lords (pdf). Moreover, during the ratification debates, when the Constitution’s opponents attacked the document as too centralizing, its advocates pointed out that senators would owe their election to the state legislatures.

However, the claim that the framers designed it to protect the states must be qualified. The framers didn’t turn the Senate into a version of the Confederation Congress, where state delegates served only three-year terms and were subject to state legislative instruction and recall. The Constitution gave members of the new U.S. Senate a fixed six-year term, far longer than the terms of most state lawmakers, the majority of whom then were elected annually. The Constitution contained no provision for legislative instructions or recall. Unless a senator was near the end of his long term and sought re-election, he usually could disregard state legislative dissatisfaction with his work.

In sum, the framers greatly limited the Senate’s dependence on the states. Their larger purpose was to create a relatively independent deliberative body.

Direct Election Was Not Just a Progressive Project

The claim that the 17th Amendment was just a Progressive project is entirely wrong. The Progressives supported it—but so did almost everyone else. Its supporters included fierce opponents of the Progressives, including most of the big city political machines and various business interests.

Direct election was hugely popular. Several states held referenda on direct election, and the results showed astounding levels of support—above 80 or even 90 percent. Even most conservative and moderate Americans agreed with the Progressives on this one.

The Reasons for Direct Election

Researchers have not found any evidence to support the claim that supporters of the 17th Amendment promoted it to undermine state powers or destroy federalism. Rather, most people believed that legislative election was no longer a viable system. Here are some of their reasons:

For such reasons, public disgust with legislative election became intense. Even the state legislatures promoted direct election, although it would reduce their own power. In many states, lawmakers and voters adopted laws allowing state legislative candidates to pledge to support whichever senatorial candidate won a popular straw poll.

Did the Amendment Weaken Federalism?

We might think a directly elected Senate would be less heedful of states’ rights than a Senate chosen by the state legislatures. But the test is not what we might think, but what really happened.

Researchers have closely examined Senate personnel and voting patterns before and after the 17th amendment was adopted. They have found that the measure did change certain things. For example, it lengthened the average term of service in the Senate. It changed the Senate’s demographic makeup and the speed with which party control shifted. It affected how readily senators accepted cabinet positions. It made certain senators more willing to sponsor bills. It may have induced the Supreme Court to overturn state legislation more readily (pdf).

But the amendment did not change Senate voting patterns on federalism or on liberal versus conservative issues. For example, one study found that senators were no more likely to support Progressive legislation after 1913 than before 1913 (pdf).

There’s also a timing problem with the claim that the 17th Amendment caused the federal government’s growth. After World War I ended in 1918 every senator had been directly elected. But instead of following the liberal pattern of diverting wartime spending into domestic programs, Congress reduced the size of the government. Federal spending as a share of the economy soon returned to historical levels and continued to drop over the ensuing decade.

When federal spending did explode, it wasn’t because of the 17th Amendment. It was triggered by severe economic dislocation and the need to re-arm against the German and Japanese threats. It was facilitated by an altered Supreme Court and by a prevailing global view that centralized authoritarianism was the wave of the future. (Mussolini, for example, was much admired in this country.)

A Word to Conservatives

We conservatives suffer great disadvantages in political warfare, so we must choose our battles very carefully. We must commit resources only to contests in which victory is achievable and will make a real difference.

The evidence suggests that repealing the 17th Amendment would not restore the federal–state balance. Indeed, one libertarian scholar believes it could increase some federal spending (pdf).

But even if—despite all the evidence—you still favor repeal, you must accept the fact that there’s no realistic chance of repeal ever happening. Direct election of senators is still widely popular, and woe to any candidate for office who proposes ending it. Voters will not support their own disenfranchisement.

Conservatives should concentrate on changes (including constitutional amendments) that are both achievable and will make a difference. Examples include restraints on federal fiscal and regulatory powers and term limits for Congress, executive branch officials, and judges.

Unlike repealing the 17th Amendment, all of those causes are popular. And success on any of them could help save the country.

Robert G. Natelson, a former constitutional law professor, is Senior Fellow in Constitutional Jurisprudence at Colorado’s Independence Institute and author of “The Original Constitution: What It Actually Said and Meant” (3rd ed. 2015). He was a highly successful conservative activist for many years (pdf).