The 14th Amendment Part I

The 14th Amendment Part I 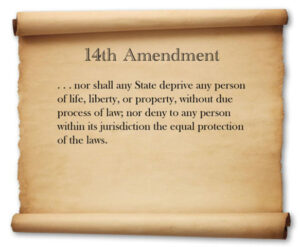 The 14th Amendment: Part I

Past installments in the “Understanding the Constitution” series have focused mostly on the original, un-amended document. This two-part essay is a primer on the longest amendment ever adopted—the 14th. Some say it’s the most important amendment, because it empowered the federal government to protect people from state government abuse.

Even before the Civil War was over, Congress proposed the 13th Amendment, abolishing slavery. By the end of 1865, the requisite three-fourths of the states had ratified it.

However, the Republicans then controlling Congress favored an additional amendment to protect former slaves from maltreatment in the Southern states and to prevent a later Democratic Congress from repudiating Union war debts or paying Confederate debts. More critically, Republicans needed an amendment to validate their Civil Rights Act, passed over President Andrew Johnson’s veto on April 9, 1866, but then of dubious constitutionality.

On June 13, 1866, Congress formally proposed the 14th Amendment. Two years later, it was declared ratified by the states.

The 14th Amendment proved controversial. For one thing, the Congress that proposed it excluded Southern representatives even though the congressional majority contended that, as a matter of law, the Southern states had never actually seceded. When some Northern state legislatures refused to ratify the 14th Amendment, Congress forced Southern states to ratify as the price of re-entering Congress. Contributing to the controversy was attempted rescission of prior ratifications by Ohio and Oregon.

Those disputes have been settled by history, largely because every state then in the Union eventually ratified the amendment. But other sources of contention continue—largely because of the measure’s poor draftsmanship.

I have spent decades immersed in the record of America’s Founding Era, including the great constitutional debates of 1787–1790. The high level of public discourse during that era is inspiring. But if you read the 14th Amendment debates, you quickly learn that the participants were not in the same league as the American Founders.

Some of the measure’s key proponents lacked basic constitutional knowledge. No one on either side seems to have understood entirely what all its phrases meant. Different participants—including those on the same side—sometimes understood the same language in different ways. And while some of the amendment’s clauses, such as “due process of law,” had been defined by history, others, such as “equal protection,” were largely new. Neither the debates nor the amendment’s text fully explained them.

For these reasons, judges and scholars continue to disagree about the meaning of some of the 14th Amendment’s phrases.

This installment and next week’s installment examine the amendment’s text, clause by clause. After reproducing each provision, I’ll provide my best inference as to its meaning—with the proviso that other scholars may disagree.

Section 1 consists of four distinct clauses. It begins with the Citizenship Clause:

Comments: Everyone agrees that the Citizenship Clause was designed to reverse the Supreme Court’s decision in Dred Scott v. Sandford (1857), which had held—in the teeth of contrary evidence—that no African-American could ever be a citizen of the United States.

But controversy remains over whether the child of a non-citizen illegally in this country is born “subject to the jurisdiction” of the United States. The issue is complicated and technical, and I summarized it several years ago in an article titled “An Objective Guide to Birthright Citizenship.”

Section 1 (cont.): “No State shall make or enforce any law which shall abridge the privileges or immunities of citizens of the United States;”

The meaning of the Privileges or Immunities Clause is the subject of continuing contention. Many writers believe that “privileges or immunities” refer to the Bill of Rights. They argue that this clause imposed the limits in the Bill of Rights—previously applicable only to the federal government—on the states. Other commentators argue that the Privileges or Immunities Clause also requires states to respect certain rights not listed in the Constitution, such as the right to abortion.

There are some serious problems with both these views. One is that if the drafters meant to impose the Bill of Rights or other restrictions on the states, they easily could have mentioned them—as they did, in fact, mention restrictions such as due process (discussed below). But instead, they chose the words “privileges” and “immunities.” In traditional law and in the original Constitution those words designate entitlements created by government, such as trial by jury, the writ of habeas corpus, the right of protection, and government benefit programs (pdf). They are not natural rights of the kind listed in the first half of the Bill of Rights, such as freedom of speech or freedom of religion. And they certainly don’t include abortion, which was widely banned when the 14th Amendment was adopted (pdf).

Moreover, quotations purporting to show that “privileges or immunities” referred to natural rights are generally taken out of context. In context, they are merely arguments for equal treatment—not that a state must recognize certain rights but that if it recognizes a right for white folks it should recognize it for black folks as well.

To be sure, two congressional sponsors thought the amendment would apply the Bill of Rights to the states, and a handful of Northern commentators agreed.

But when interpreting a constitutional amendment, the legally decisive records are the proceedings of the ratifying state legislatures—not what congressional sponsors or commentators said. And those proceedings reveal little, if any, evidence that “privileges or immunities” referred either to the entire Bill of Rights or to unenumerated rights. A more common view among the ratifiers was that Section 1 simply assured equal state treatment of white and black.

There are further reasons for concluding “privileges” and “immunities” in the 14th Amendment mean the same thing they mean in the original Constitution—that is, government-created entitlements. First, there’s a legal rule that when the same words appear more than once in the same document, they are presumed to have the same meaning. Second, a central purpose of the amendment was to validate existing and planned federal civil rights laws, which technically bestowed “privileges” rather than natural rights. Third, only four years after the amendment was ratified, the Supreme Court essentially ruled that “privileges or immunities” were limited to federal entitlements. As the late Justice Antonin Scalia remarked, the justices who decided that case had lived through the 14th Amendment’s ratification. So they would have known.

Section 1 (cont.): “nor shall any State deprive any person of life, liberty, or property, without due process of law;”

We inherited the phrase “due process of law” from English jurisprudence. When the Constitution was adopted, the phrase was already centuries old. Its historical meaning is that when government proceeds against you, civilly or criminally, it must follow existing procedures and can’t make up the rules as it goes along.

Some writers suggest 19th century court decisions expanded the definition of “due process,” so that the 14th Amendment Due Process Clause is broader than its Fifth Amendment counterpart. However, I’ve examined those cases and found that they really didn’t change the traditional definition. Once again, we should apply the rule that a phrase appearing twice in the same document means the same thing.

Unfortunately, the Supreme Court has abused both Due Process Clauses. It has invented new rights (such as abortion) and then ruled that states impairing them are interfering with “liberty.” The court also pretends that the 14th Amendment version includes most of the Bill of Rights—even though the Bill of Rights mentions due process as only one right among many.

Properly understood, though, the guarantee of due process means only that if government proceeds against you, it has to follow pre-existing procedures.

Next week: The Equal Protection Clause and the remainder of the 14th Amendment.

Robert G. Natelson is a retired constitutional law professor, senior fellow in constitutional jurisprudence at Colorado’s Independence Institute, and the author of “The Original Constitution: What It Actually Said and Meant” (3rd ed., 2015).