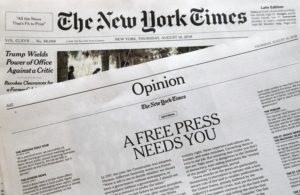 DEMOCRATS WANT YOU TO PAY THE MEDIA’S BILLS By Daniel Greenfield – October 08, 2020 The media is dying. Its business model is defunct. Its bias has alienated most of the country. In the latest Pew survey, the only group that still trusts the media are Democrats. And while so many millions are out of work, Democrats are… 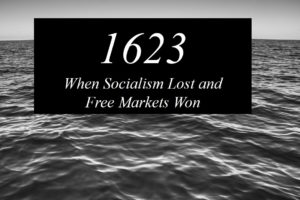 1623 When Socialism Lost, and Free Markets Won By David Leeper – June 19, 2020 In August, 2019, the New York Times began driving an ill-conceived propaganda campaign surrounding the year 1619, when slavery first came to America in the Jamestown, Virginia colony. It is that year, argues the Times, that defines our national character — not the iconic 1776. The Times has… 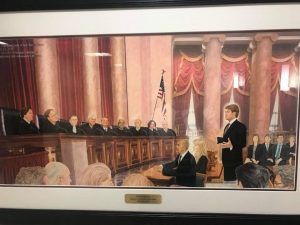 NY Times: Where Laws Come From?

By Michael Farris October 22, 2018 Transgender “Laws”, Trump, the New York Times, and Constitutional Democracy The New York Times breathlessly condemned President Trump for dismantling the “laws” creating legal “rights” for transgendered persons. The only problem is there are no such federal laws. Laws are made by Congress. Obama issued countless executive edicts purporting… 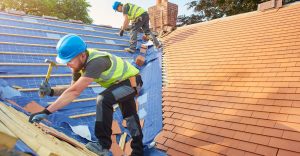 The New York Times Explains Why the Minimum Wage Should Be $0.00 One of the greatest takedowns of the minimum wage you’ll ever find comes from an unlikely place. Jon Miltimore September 25, 2018 The minimum wage is the Jason Vorhees of economics. It just won’t die. No matter how many jobs the minimum wage destroys,…

DEMOCRATS WANT YOU TO PAY THE MEDIA’S BILLS

The media is dying. Its business model is defunct. Its bias has alienated most of the country. In the latest Pew survey, the only group that still trusts the media are Democrats.

And while so many millions are out of work, Democrats are bailing out the media.

The wave of consolidations and bankruptcies is sweeping like a fire through major papers. Cable news will be a casualty of demographics and the end of bundling. The end of network television is less than a decade away. Brand names like CNN and MSNBC will soon be where Time, Newsweek, and other news magazines ended up once subscriptions collapsed.

The media is dying, but it’s not about to die gracefully. It just needs to find money. Lots of it.

Big Tech billionaires have bought classic newspapers and magazines like Time, The Washington Post, and The New Republic, but those are vanity projects and even Jeff Bezos doesn’t have enough money to subsidize the entire ossified infrastructure of the media.

But the only people who have more money than the Amazon CEO are the American people.

The media’s Plan A has been sponging off Big Tech companies like Google and Facebook, pressuring them to pour hundreds of millions of dollars into its operations. Its Plan B is blurring the line between lefty activist non-profits and its newsrooms with organizations like Report for America being funded by Facebook and Google to embed activists into local newspapers.

Is that going to pay the media’s bills? No. That’s why there’s Plan C. And Plan C is you.

H.R. 7640: The Local Journalism Sustainability Act was introduced in Congress, backed by a coalition that includes Report for America and the National Newspaper Association, and would offer tax credits for newspaper subscriptions and tax credits for paying the salaries of the radical activists working there. There’s also a $5,000 tax credit for advertising in newspapers.

At a time when millions of Americans are out of work, when families are faced with losing their homes and businesses, Democrats have decided that they should aggressively subsidize a dying industry at the expense of everyone else whose jobs are seen as “non-essential”.

The countless stores, gyms, bars, salons, and other small businesses going out of business in the epidemic of Democrat lockdowns and lootings could use this kind of bailout. But the Democrats insist that their media messaging operations are vital and should be subsidized.

While Rep. Ann Kirkpatrick, who introduced the bill, claims that it will fund “local newspapers”, those local newspapers are largely owned by national operations and hedge funds. While actual local businesses go out of business, Democrats are proposing a bailout for media investors.

Rep. Kirkpatrick’s press release touts support from from the News Media Alliance whose board is stacked with the heads of McClatchy and USA Today, huge national chains with a combined thousands of papers, not to mention the CFO of the New York Times, and a VP at the Washington Post. Are these the local small businesses Democrats want to subsidize?

H.R. 7640 would be an outrage at any time, it’s a particular outrage when so many Americans are out of work and so many small businesses are going under that Democrats and some Republicans want to provide a $250 tax credit for newspaper subscriptions, a tax credit covering half of $50,000 salaries for media hacks, and $5,000 credits for advertising in newspapers.

Companies that own dozens, hundreds, and thousands of papers are lobbying Congress.

They keep claiming that the bill will help save “local journalism”. But how does the Local Journalism Sustainability Act define local journalism? Not based on the paper, but the readers. As long as 51% of the paper’s readers live in the same state, it’s considered a local paper. Even if the paper is a subsidiary of a national chain whose real headquarters is in New York or D.C.

Or alternatively, they live within 200 miles of each other. Depending on how you measure, Washington Post readers in New York and New York Times readers in D.C. would be “local”.

That’s some “local” journalism. And it’s no accident that it was written this way.

There’s nothing local about this bailout. It will mostly go to subsidize the huge newspaper chains that are lobbying for it, while bribing businesses and readers to fund their failed business model.

Even while Democrats are destroying businesses with viable business models, they’re trying to keep the media alive by exclusively offering tax credits for their political allies.

Democrat organizations like Acronym’s Courier Newsroom have been setting up fake local papers while Report for America has been hollowing out papers by embedding radical activists into newsrooms. The Local Journalism Sustainability Act is testing the business model for converting the media into a bunch of political non-profits backed by taxpayers and lefty donors.

While these donors already back a network of radical messaging operations, proposals like the Local Journalism Sustainability Act allow the media to ease into the transition by having it both ways, maintaining corporate ownership, while having their operations subsidized by tax credits.

The internet has been slowly digesting the separate parts of the media, and it doesn’t pay the bills. The ads and subscriptions that funded local newspapers were wiped out by the internet. Streaming dooms cable channels and local news, leaving behind a lot of online video. But even digital media is being crushed by social media. Vox, Vice, the Huffington Post, and all the digital lefty outlets were hit with layoffs after facing the impossibility of actually turning a profit.

The media can’t survive on its own terms. Its business model is defunct. Its shakedown strategies aimed at Google and Facebook have silenced countless conservative voices, while pushing social media to spam its content, but won’t preserve the media as a viable institution. The hedge funds and private equity firms that own the media will cut costs, consolidate, and dump. The tech and communications firms that come into possession of media outlets will shrink and then dispose of them. That doesn’t mean that the media will die. It will ‘Pravdaize’.

CNN, MSNBC, and the Huffington Post will be deemed “essential” forms of journalism that must be protected by subsidizing their operations, much as newspapers would be subsidized.

The media will become a public institution. Its funding will come from taxpayers in a thousand different ways and the Local Journalism Sustainability Act is the least of it. Media activists have been cooking up a large package of tax credits, subsidies, law changes, tax code restructurings, and assorted proposals to transform the media from corporate properties into state media.

Imagine PBS and NPR multiplied by a million.

Congress should not be bailing out media tycoons while Americans go hungry. If Americans want local papers, they can buy them. And if they aren’t, maybe it’s time that the big chains asked why they’re losing subscribers and why Americans aren’t buying what they’re selling.

A majority of Americans don’t like and don’t trust the media. They’ve divested from it. The Local Journalism Sustainability Act wants to bribe Americans to read the paper with their own money.

A better idea might be to have the media pay its taxes and let Americans keep their money.