States Must Step Up!

States Must Step Up!

Congress has demonstrated that it will not do its job… so state leaders MUST use their Constitutionally-authorized powers… and step up.

Some advocates for solving national spending, deficit, and debt problems… and related national issues… think it is great that members of Congress are introducing and co-sponsoring proposed constitutional amendments.  Those advocates include some very prominent national organizations and their seemingly influential boards and leadership.  Is their hope misplaced?

During the current session of Congress at least 58 members of Congress have introduced or co-sponsored at least 10 resolutions calling for constitutional amendments seeking to impose some form of fiscal restraint on Congress.  That doesn’t include the previously introduced resolutions calling for the Constitution to be amended for a myriad of reasons, such as term limits, overturning certain Supreme Court decisions, resurrecting the 47-year-old ERA proposal, etc.

The sad reality is that very few of these measures will ever see a floor vote… even in one chamber.  And, none of them are likely to be approved by 2/3 votes in both chambers.  Does the term “dead on arrival” ring a bell?

Would it be an overstatement to say that America’s national legislature has deteriorated into a colossal waste of time, energy and money?  If so, not by much.

Putting this in context…
As of mid-June members of the 116th Congress have introduced 6,161 bills and resolutions; that’s an average of almost a dozen per Congressperson.  Keep that 6,161 number in mind while reading below.  That number is expected to double before the end of this session.

Each member of Congress also selectively signs on as a co-sponsor of measures introduced by other members, giving each Congressperson a wide array of bills they can go home and tell their constituents they support.

During the past roughly five months 225 resolutions (of all types) have passed.  That includes 21 “enacted bills and resolutions”.  In addition, there are 197 bills and joint/concurrent resolutions that had a significant vote in one chamber, making them likely to see further action.  Historically only about 6% of all introduced resolutions are ultimately passed.

So… what is the probability that both chambers of the US Congress will ultimately discuss, vote on, and adopt ANY proposed constitutional amendment on ANY topic?

Clearly… if America is to find its way out of its many problems (excess debt, national identity/sovereignty issues, divisiveness, sluggish leadership, etc.) it is up to the 7,470 state legislators to provide leadership. 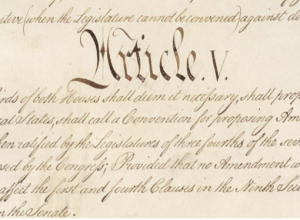 Now is the time.  If we are to restore federalism, wherein the States retain their sovereign status, State legislators MUST meet to confer in a non-partisan spirit (in some sort of Summit of States???), deliberate, and propose some meaningful “fixes” to America’s governance issues.  Congress has demonstrated that it will not do its job… so state leaders MUST use their Constitutionally-authorized powers… and step up.