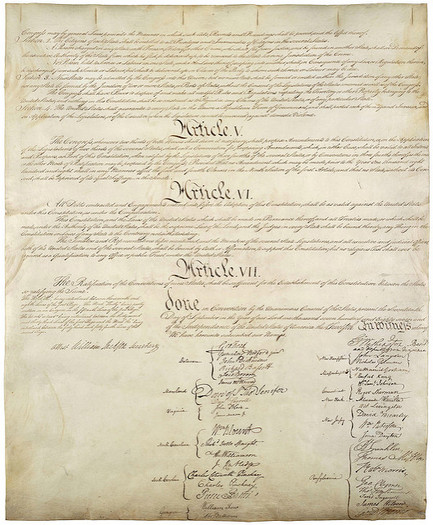 On Nov. 7 Forbes carried an excellent article by Tom Lindsay entitled “Resistance On The Right: Will Conservatives Ever Come Together On An Article V Convention Of The States?”.  Lindsay is the director of the Center for Higher Education at the Texas Public Policy Foundation in Austin, Texas.

Lindsay offers a brief overview of the Article V process (while debunking arguments of AV opponents), and emphasizes why the powers within Article V need to be used now.

He says, “It seems clear that the federal government is unable or unwilling to extricate our country from the abyss into which its power grabs have thrust us.  What is left under the Constitution is the states’ power to employ Article V to call a convention to propose amendments to reverse our decline through reducing the size and reach of the federal government and restoring the powers granted to the people in their states by the Constitution.”

He also underscores the work of Article V expert Rob Natelson who he quotes as having written: “At least 27 state legislatures have valid applications outstanding for a convention to propose a balanced budget amendment (BBA).  At least six states without BBA applications have outstanding applications calling for a plenary convention.  Thus, if aggregation is called for, 33 of the 34 applications needed for Congress to call a convention likely exist.”

Lindsay concludes his Forbes article by expressing his belief that America’s state leaders can and should use their Article V powers with “fidelity” to their citizens to assure that America’s experiment in self-government does not fail.  He says “If we are to prevent the failure of our experiment in self-government, a convention of states appears to be our last, best hope.  But for this to happen, elements on the political Right need to be assured that the benefits of such an undertaking outweigh the risks.”

A week later Forbes carried a follow-up article by Lindsay entitled “‘The Risk is Minimal’: Justice Scalia On The Need For A Convention of States To Restrain Federal Power”.  Read Lindsay’s first article HERE, and the second one HERE.