Renewable Energy: Fanning the Flames of War in Ukraine

Decades of sacrificing fossil fuels on the altar of renewable energy is catching up with the West as the Russia-Ukraine war intensifies. “[F]ossil fuel suppression” in Western countries “entails significant empowerment of our most significant geopolitical adversaries, and poses major risks to world security, and even to our national security,” states attorney Francis Menton in a weekend op-ed on his blog Manhattan Contrarian.

He points to skyrocketing energy prices in the U.S., Europe, and other nations where governments wage war on fossil-fuel industries, making many dependent on Russian exports. “And suddenly we have an invasion of Ukraine, basically financed by Western countries that have suppressed their own production of oil and gas and thus must buy the stuff from Russia,” Menton declares.

“As much as 40% of Europe’s natural gas supply comes from Russia” through Ukraine, reports NPR, “a reliance that puts U.S. allies like Germany in a jam when it comes to finding a sanctions solution to the crisis.” It’s also prompting fears that Russia could retaliate against the West by cutting off supplies, though that hasn’t happened yet, says Reuters.

Biden intentionally left energy out of the banking and technology sanctions on Russia that he announced last week, saying the White House is closely monitoring for disruptions and coordinating with allies “toward our common interest to secure global energy supply.” However, his decision sends a clear signal. “I don’t think Russia is blind to what is going on, and it must indicate to them that the West does not really have the stomach for a painful fight over Ukraine,” Columbia University historian Adam Tooze told the Associated Press.

By failing to impose significant sanctions on the Russian oil and gas industry, which accounts for the majority of all Russian exports, the administration is intentionally leaving the biggest industry in Russia’s economy virtually untouched. The sanctions imposed on Russian banks, while welcome, may not isolate the Russian financial system from international activity. That’s why the U.S. should impose crippling sanctions on Russia’s oil and gas sector and Iran-style secondary sanctions on Russian banks that force the world to choose between doing business with Russia or the United States.

None of that would be necessary if Biden, Toomey and other mainstream pundits would simply acknowledge the true culprit placing the West in checkmate: reliance on undependable “renewable” energy. Countries that brag about their renewable investments cannot keep the lights on or the heat running without reliable backup for wind and solar from demonized nuclear or fossil fuels. “Western countries have invested hundreds of billions of dollars in wind and solar energy that don’t work and don’t provide the energy needed,” says Menton, “so if these countries want to keep their electrical grid running, they need to buy natural gas, which principally comes from Russia.” Hence, the same nations who condemn the Ukrainian war stubbornly continue to finance it. 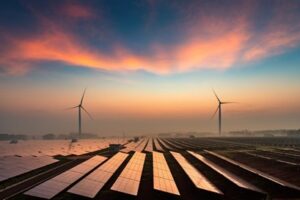 As an example, Menton points to Germany, which “fancies itself leading the world to the great clean renewable energy future.” The country has around 125 gigawatts (GW) of wind and solar generation capacity to fill its peak electricity demand of 90 GW. But because the wind doesn’t always blow and the sun doesn’t always shine, renewables often bottom out, leaving coal, oil, and natural gas to fill the gaps. Nuclear can’t help, since Germany is phasing out all its reactors. To avoid blackouts, the country depends on Russia for 50 percent of its natural gas, 45 percent of its coal, and 34 percent of its oil.

Why can’t the U.S. step in to help her European allies? Because the Biden administration is guilty of the same eco-lunacy, promoting inefficient renewables at the expense of fossil fuels. Biden had hardly taken his seat in the Oval Office last year when he cancelled the Keystone XL crude-oil pipeline. He went on to suspend oil and gas leases and enact numerous measures making access to fossil fuels difficult and costly. Most recently, he signed an executive order mandating net-zero carbon emissions across federal operations by 2050.

The average consumer is already witnessing dire results as utility bills and gas pump charges rise. Menton relates that the average price of gasoline went from $2.25 to $3.60 in the past 13 months, due to prices of crude oil nearing $100 per barrel. U.S. natural gas prices have jumped 50 percent over the same time period, averaging about $4.50/MMBtu, although that pales in comparison to what Europe pays for its natural gas imports: $30/MMBtu.

Instead of acknowledging its error, the West continues to fortify the Putin war chest, and it does not look like policies will change for the better anytime soon. As we face the potential of nuclear World War III, Biden’s climate czar, former Secretary of State John Kerry, told BBC Arabic that what concerns him about the Ukrainian crisis is that war would have “massive emissions consequences” and distract people from the climate crisis. “And so I hope President Putin will help us to stay on track with respect to what we need to do for the climate,” Kerry droned.

No wonder Putin is not intimidated.