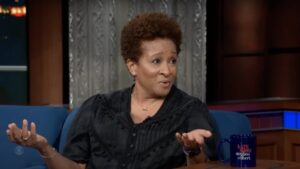 ‘The problem is that middle stuff. It’s those states in the middle, that red stuff. Why do they get to tell us what to do?’

“The problem is that middle stuff. It’s those states in the middle, that red stuff. Why do they get to tell us what to do when the majority of us live out in New York, California, and we’re paying for all this crap, really, I mean, right? I mean, we’re footing the bill,” she on Stephen Colbert’s “The Late Show” on Monday night.

“That’s the union. It’s supposed to be a representative democracy, but it turns out to be minority rule right now,” Colbert interjected.

The comedian duo’s anti-flyover country diatribe comes on the heels of a string of landmark decisions from the U.S. Supreme Court, including one that sent abortion law back to the states.

Despite the fact that Democrats control the White House, Senate, House, the corporate media, and entertainment like Colbert’s “Late Show,” leftists like Sykes are unsatisfied with the perfectly legitimate judicial decisions like Dobbs v. Jackson. According to Sykes, that means extremely blue coastal states like California need to be put in charge of things.

“California, if it were a country, would be like the fifth-largest economy, so if, I’m footing the bill, know your position,” Sykes said. “Look, if I say hey let’s go out to dinner, you don’t get to pick the restaurant. Just shut up and eat.”

Never mind that “those states in the middle, that red stuff” helped foot the bill for “Covid relief” in blue states like New York and California and had nothing to do with the majority of justices’ decisions to overturn Roe v. Wade

If the court’s recent string of landmark decisions taught us anything, it’s that the left really hates losing and they will do everything in their power to make sure Republicans pay for it. That’s why there was an avalanche of calls to burn the Supreme Court following the Dobbs v. Jackson leak and then actual violence all weekend following the final opinion’s release.

Sykes may not have been part of the actual burning, but she said the quiet part of the agitators’ quest out loud. She said she was “salty” about the end of Roe and even accused the Republican-nominated justices of lying during their confirmation hearings. Spoiler alert, they did not lie, even though Colbert claimed “especially Kavanaugh” had.

Sykes isn’t just unhappy with Dobbs and the court. She’s unhappy that Democrats don’t control everything and she used nearly five minutes on Colbert’s platform to amplify her belief that high-income Americans who vote blue should dictate U.S. policy and constitutionality.

Jordan Boyd is a staff writer at The Federalist and co-producer of The Federalist Radio Hour. Her work has also been featured in The Daily Wire and Fox News. Jordan graduated from Baylor University where she majored in political science and minored in journalism. Follow her on Twitter @jordanboydtx.