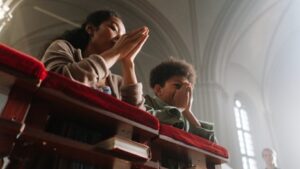 Democrats and media are doubling down on their insults to faithful Catholics no matter how illogical or hateful those attacks may be.

Hell hath no fury like a Democrat scorned. While they may be vicious to their political opponents (see the recent FBI raid on Mar-a-Lago), they can be even more vicious to their friends who turn against them. If a group of people were once reliable Democrats, but then change their mind, they will be excoriated and demonized with relentless invective and shame. And it doesn’t matter if these people are part of a protected class; if they disavow anything in the Democrat agenda, they are fair game for all forms of bigotry.

Such is now the case for Catholics. Once a core constituency for Democrats, many Catholics are coming to realize that the leftist priorities of the Democratic Party are fundamentally incompatible with the Catholic faith. Even if Democrats pretended to care for the poor and marginalized in the past, they are currently much more interested in helping mothers kill their children, pushing confused young people to change their sex, facilitating the passage of illegal immigrants into the country, and criticizing local law enforcement.

At a certain point, it becomes clear that pulling the party back from this radicalism is a futile effort. Therefore, an increasing number of Catholics along with many other social conservatives have come to support the Republican party. The effect of this switch has made the GOP a more pro-family working class party (sometimes called the “New Right”) while the Democrats are becoming more Marxist.

All this is at work in the recent screed against conservative Catholics in The Atlantic. The writer Daniel Panneton attempts to make the case that the rosary (that is, Catholic prayer beads) has “acquired a militaristic meaning for radical-traditional (or “rad trad”) Catholics.” In Panneton’s reckoning, these “rad trads,” who are basically conservative Catholics, have subverted the original purpose of the rosary and made it a symbol of violence and toxic masculinity. This is part and parcel of traditionalist Catholics espousing “Christian nationalism” and aiming to inflict “’righteous violence’ against political enemies regarded as demonic or satanic, be they secularists, progressives, or Jews.”

For anyone who still thinks The Atlantic is a serious publication with thoughtful commentary on today’s politics and culture, this piece should entirely dispel that notion. Besides being completely wrong, Panneton’s argument is offensively stupid. He deliberately misinterprets the occasionally militant language of Christian spirituality in literal terms, and he bases his points on paranoid generalizations and links to unrelated white supremacist sources. As writer John Hirschauer explains, “The piece does not advance an argument as much as it does a series of observations, most of which are unsubstantiated, about right-wing Catholics and their alleged sympathy for things that Panneton thinks are problematic.”

This puerile reasoning is also at work in another recently published essay in Slate condemning conservative Catholics. The title of the piece says it all, “Uh, Can the NYT Please Not Treat Catholic Reactionaries as a Fun Sexy Trend Story?” The writer Molly Olmstead takes issue with another essay in the New York Times by Julia Yost where she describes a chic traditional Catholic community right in the heart of the city.

Olmstead first claims that these Catholics are not chic at all, but rather dangerous since they have a love for tradition and a distaste for phoniness. In a predictable fashion, she can’t help but compare them to white supremacists: “Just as white supremacists reach back to a fictional version of the Middle Ages or the Viking Age to create their own mythos, the trads look back to an imagined pre-modern church.”

Despite being a Catholic who regularly attends the Traditional Latin Mass, I somehow missed that group of yuppies yearning for the good old days when heretics were burned at the stake and popes called for another Crusade against the infidels in the Holy Land.

Blatant prejudices aside, these two essays indicate that today’s leftists have little interest in compromising any of their positions with people of faith. They refuse to acknowledge people’s reasons for belief, defending the unborn, promoting chastity and family life, or rejecting moral and intellectual relativism. Rather, they will double down on their insults no matter how illogical, hateful, or counterproductive they might be.

Perhaps they think that they can intimidate former Democrat voters back into compliance. Much like mean girls in high school — and so many of these articles, especially Olmstead’s really do come off as the snarky rants of mean girls — they can relentlessly humiliate and socially ostracize the less popular kids until those kids surrender. Indeed, there are a number of Catholics who would rather renounce their faith entirely than be locked out of their Twitter account or called a dumb bigot by a leftist magazine.

However, it’s more likely that the left needs a new bogeyman, someone who can unite an increasingly fractured coalition. Of course, there’s always Trump, but he’s not the president anymore and someone else needs to join him. Consequently, they seem to have settled on the Christian nationalist, which is their way of referring to practicing Christians who love their country and voted for Trump in the last presidential election. Even if various factions and identity groups on the Left have their differences, they can at least come together in their hatred of Trump and these people who seem to support him.

Fortunately, despite their massive influence in media and the academy, this latest effort of the left to vilify Catholics specifically and Christians in general is doomed to fail. The attempt to paint proud Christians and prayerful Catholics as menaces to public life is not just utterly false, but completely absurd.

To say that a man praying the rosary is as dangerous as a terrorist setting off bombs or a gangster shooting up a store is the polar opposite of reasonable. It might be funny if these people weren’t serious, but they are quite serious about this and will break laws and tell endless lies in service of this narrative.

It will likely take hundreds more articles, reports, TV specials, and movies to make this new radical traditionalist Catholic line stick, but no one should have any doubt that the left will try to do it and deplete what’s remaining of their credibility. In the long run, conservatives can take comfort that this kind of thing will lead to the left’s demise; in the short run though, it’s going to be ugly, immoral, and supremely idiotic.

Auguste Meyrat is an English teacher in the Dallas area. He holds an MA in humanities and an MEd in educational leadership. He is the senior editor of The Everyman and has written essays for The Federalist, The American Conservative, and The Imaginative Conservative, as well as the Dallas Institute of Humanities and Culture. Follow him on Twitter.