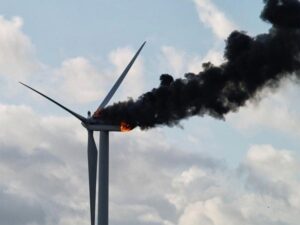 “The tech companies have to stop allowing specific individuals over and over again to spread disinformation,” McCarthy said in an interview with Axios.

Let’s play along with McCarthy’s hypothetical in which “disinformation” means the facts and opinions not specifically spoon-fed to Americans by the government. Here are six truths about the environment that the Biden administration would probably censor.

The left’s plan to employ “WWII-type mobilization to address the grave threat posed by climate change” is not only too radical to garner widespread support, but also introduces problems for the ecosystem. Even put aside the $5 trillion price tag that switching from coal and nuclear to 100 percent renewable energy would cost.

In addition, so-called “green energy” requires rare earths and other components that currently are controlled by countries that destroy the environment for political and economic gain, such as China. Wind farm components and electric car batteries contain many major toxins and require huge amounts of energy to assemble and put online, while providing low-quality energy in return.

Electric vehicles (EVs) are around $10,000 more expensive than the average car, and the costs don’t stop there. Installation of an at-home charging station can cost anywhere between $300 for extremely basic charging hardware to $35,000 for more advanced chargers. Additional costs also include added costs to household electrical bills, special EV permits, and special renovation costs.

And where do unthinking environmentalists expect the electricity generation to fuel these cars comes from? Sometimes coal, sometimes gas. Certainly not reliably from wind farms.

While Biden claims “the typical driver will save $80 a month” when switching from driving a gas car to an EV, his statement neglects the high costs of purchase and upkeep of EVs that make them an unrealistic choice for most Americans. It also ignores that electric work trucks, farm vehicles, semi trailers, and the like are completely unfeasible. Even if they were to be mass-engineered in the future, their components run into all the energy and rare earths problems of other EVs.

What “green” energy really means is “low energy.” And a low-energy society is a poverty-stricken one.

Fracking natural gas as a form of fossil fuels is a way in which America has harnessed our natural resources without expelling excessive carbon into the atmosphere. It has also helped stimulate our economy by producing hundreds of thousands of jobs in the industry.

However, President Biden has promised time and time again to eliminate fracking and plans to eradicate fossil fuels in a costly switch to completely “clean” energy.

At-home abortions that chemically starve, disintegrate, and expel unborn babies from their mother’s wombs have environmental repercussions in addition to their obvious moral problems and health risks. In the final stage of the abortion in which the broken-down flesh and bone of the unborn baby are expelled from the womb, the pro-aborts at Planned Parenthood tell women to treat the remains as a “heavy, crampy period” and flush them down the toilet.

Students For Life President Kristan Hawkins notes that, with chemical abortions making up nearly 40 percent of all abortions, there is rising concern over the hazards flushing human remains introduces into our water systems.

With the FDA’s decision to allow abortion pills to be mailed, this environmental side effect of the chemical abortion pill would surely get silenced.

Around 1.2 million megawatts of wind and solar power have been installed over the past 10 years, but the world still runs on 80 percent fossil fuels. Why? It’s greatly due to the unreliability of intermittent energy forms.

Consider the many factors that affect the capacity of energy these renewable resources are actually able to produce: inconsistent wind, angle and power of the sun, and other factors. While those 1.2 megawatts have been installed, only a fraction have been actually produced by these renewable sources.

As Biden promises a complete switch to renewable energy sources, the reality is that these sources are not as reliable as fossil fuels and the complete replacement of fossil fuels with “green energy” will have devastating effects on our country and the world. A low-energy economy means more hungry Americans, worse medical care, worse education, and more.

The number of masks produced since the start of Covid-19 is well into the tens of billions, and many of them have found their way into our oceans. Harmful toxins such as lead, copper, and antimony were found to be released from these masks when coming in contact with water. On top of all that, it is estimated that it will take about 450 years for this wave of discarded face masks to degrade.

This fact does not bode well with the Biden administration’s perpetuation of Covid panic, most recently with the claim that one-third of Americans are in areas experiencing a high volume of cases. Despite their admission that this is not as dire as the omicron variant, their call to Americans to continue masking up only sustains the environmental harms from masks.

Elise McCue is an intern at The Federalist and student at Virginia Tech majoring in multimedia journalism and professional and technical writing. She is an opinions and lifestyle writer for the Collegiate Times and reports on the Southwest Virginia music scene for The Roanoke Times. You can follow her on twitter @elisemccue or contact her at elisemccue@vt.edu.