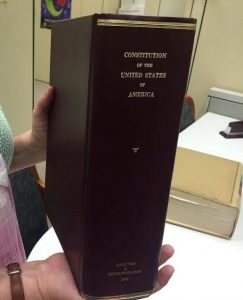 Democrats Bring “Rule or Ruin” to the Supreme Court

Several months ago, I wrote that a large segment of the intellectual elite of the Democratic Party has adopted a “rule or ruin” approach to an American Constitutional process that they no longer view as legitimate. In their own minds, inherent aspects of the American system of government such as the existence of the Senate, the Electoral College, and even the First Amendment are not neutral principles, but unjust impositions that they previously accepted as a gracious concession as long as they could win within them. If they concluded they could not win and were faced with the choice between transforming themselves into a force that could win within the American system or abandoning our traditional system entirely, they would choose the latter.

This process has only been intensified as conservatives have for the first time in nearly a decade begun to use the power of the state to assert themselves in the cultural realm, previously a near-exclusive domain of the left, and as the Supreme Court, which previously guarded liberal advances against electoral backlash, appears poised to relinquish that role by reversing Roe v. Wade and returning abortion to the people.

Whereas last year, the arguments we heard from the left against the American system focused on the “undemocratic” nature of the Senate, which supposedly prevented Democrats from passing their legislative agenda, now those same theories are used to suggest that the Supreme Court itself, with justices appointed by a president selected by an “undemocratic” electoral college, and confirmed by that same Senate, is illegitimate. If court packing was a liberal fantasy in 2020, it increasingly looks like disobeying Supreme Court rulings the left disapproves of will be litmus test for many liberals going forward.

The above is a tweet from Vox’s senior legal correspondent, and the author of The Agenda: How a Republican Supreme Court is Reshaping America. It encapsulates the “rule or ruin” view Democrats have taken toward the Supreme Court quite aptly. Republicans winning indicates the failure of democracy. Democrats retaking power would mark democracy’s restoration. Hence, if Republicans were to win the 2024 elections, and continue winning, it would mean the end of American Democracy.

Millhiser might argue that what he refers to is not Republicans winning elections per se, but rather the Republican Party enacting laws such as preventing absentee voting without IDs or preventing Mark Zuckerberg from spending hundreds of millions to influence the administration of local elections. But those points are subjective. These Republican reforms are defined as threats to democracy not because either reform is undemocratic, but because they are perceived as making it less likely for Democrats to win. Hence successful efforts to enact these measures  are attacks on democracy.

In my earlier piece, I suggested that having declared the “popular vote” the only source of legitimacy, Democrats are committed to refusing to recognize any Republican candidate who wins an electoral college majority without winning more votes nationally. Furthermore, having defined voter suppression as anything which may cause Democrats to perform worse, any popular vote victory by a Republican can clearly be ascribed to “voter suppression.” The result is a situation where any scenario other than one in which a Democrat is inaugurated on January 20th, 2025, is illegitimate and undemocratic.

Now, Democrats have extended the same arguments to the Supreme Court following the unprecedented leak of a draft opinion from Justice Samuel Alito suggesting that the court was set to overturn Roe v. Wade. While some older liberals expressed doubts about the origins of the leak, suggesting it might even have come from a conservative source seeking to “lock in votes,” this sort of subtle deflection was overwhelmed by the eagerness with which much of the Democratic Party declared Roe and abortion sacrosanct. The decision was an assault on “Stare Decisis” and all tactics, including violent protests at the homes of Supreme Court justices which sent their families into hiding were justified to protect claimed constitutional rights.

It is interesting what Democrats did not base their outrage on; namely, a defense of Roe on its merits. Here, it is unclear what their complaint with Alito precisely was. No less an icon of the liberal judicial tradition than Ruth Bader Ginsburg declared in 1992 that “Roe v. Wade, in contrast, invited no dialogue with legislators. Instead, it seemed entirely to remove the ball from the legislators’ court.” As late as 2013, she lamented that “My criticism of Roe is that it seemed to have stopped the momentum on the side of change,” and would have preferred if abortion had been determined by state legislatures. Yet when Justice Alito in the draft termed Roe “egregiously wrong,” the left declared this an attack on the constitutional system, with implications that he had lied to senators about upholding precedents, an absurd position when even Ginsburg shared his view.

Rather, Democrats based their real objections to the Alito draft on “democratic legitimacy” present and past. In the present, they have been quick to trumpet polls purporting to show widespread support for keeping Roe even if in those same polls majorities favor the same sort of 15-week ban on abortions that is pending before the Court. As for past legitimacy, Democrats suggest that the problem is not whether Roe is legitimate but rather whether the Court itself is. Here they revive all of their “rule or ruin” arguments about the Senate and Electoral College. Democrats argued that despite having “won the popular vote” only once since 1988, Republican presidents have appointed six of nine justices. As the left now does not approve of the system by which the Court was chosen, their recognition of it has been contingent on it doing what they wished. When it no longer did so, they decided they were entitled to withdraw their support.

Just as with their denigration of the Electoral College and the Senate, the Democratic assault on the Supreme Court raises the question of just what, precisely, they intend to do about it. Having insisted to everyone, including their own voters, that the Supreme Court is not just dangerous, but illegitimate, what is their plan to fix it? If it is truly illegitimate, how can a plausible Democratic majority with enough votes to overcome or eliminate the filibuster allow it to remain on democratic grounds? If it is actively harming people by stripping them of their “rights,” then how can they govern when it retains its power of mischief? Would that not be a betrayal of the voters who elected them?

One of the great strengths of the United States Constitution was always that Americans saw elections as mandates to change leaders, not the system. An incumbent president or party being defeated for reelection was a vote of no confidence in those politicians, not in the Constitution itself. In turn, the victory of the incoming officeholders was not a mandate to destroy the system. With the new Democratic party, that will no longer be the case. By their own rhetoric, Democrats have ensured that any future Senate majority they might win will be won by candidates denouncing the Supreme Court as illegitimate and harmful, and they will therefore be faced with a mandate not to pass laws, but to either destroy the illegitimate system or betray their voters. While one might hope they will choose the latter, the experience of Biden, whose failures are already being ascribed not to the failure of his policies but to his failure to implement them (a new “stab in the back” myth featuring Joe Manchin and Kyrsten Sinema along with the Supreme Court) may mean future Democrats will seek to avoid any further betrayals. If so, Democrats will have intellectually transformed into a revolutionary party.

Millhiser asked in his tweet what the prospects were for U.S. democracy after 2024. The answer is that they will be a whole lot brighter, and the prospect of competitive elections a whole lot more likely, if Democrats behave as a loyal opposition. On the contrary, win or lose, the future for Democrats and U.S. democracy itself is a whole lot less bright if they dedicate themselves to a revolutionary path of rule or ruin.

Daniel Berman is a frequent commentator and lecturer on foreign policy and political affairs, both nationally and internationally. He holds a Ph.D. in International Relations from the London School of Economics. He also writes as Daniel Roman.