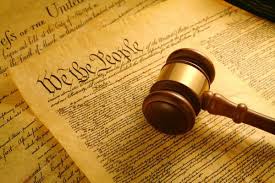 This essay clarifies the three terms and how they interact.

Strict construction is this: If a word or phrase has two possible meanings, then you apply the narrower one.

“Textualism” means interpreting a document from the document’s words and structure. The pure textualist generally doesn’t consider other evidence of the parties’ intent: The writing controls.

Textualism is associated with the late, great Supreme Court Justice Antonin Scalia. He wrote the lead essay in a famous 1997 book called “A Matter of Interpretation” (re-issued in 2018). Scalia argued that judges should apply textualism to federal statutes. They should disregard legislative history and the “intent of the lawmakers” and focus on the statute’s words and structure. Here are his reasons:

All these reasons apply to federal statutes, not to the Constitution.

Constitutional scholars have different ways of defining “originalism,” but I think they all boil down to this: Originalism is reading the U.S. Constitution the same way most judges would have applied it immediately after its ratification—say, in 1791 or 1792.

At that time, the courts construed most legal documents, including constitutions, by seeking “the intent of the makers.” They used outside evidence if necessary to ascertain that intent (pdf). In the case of the Constitution, the “intent of the makers” was the understanding of the delegates to the 13 state conventions that ratified the document (“original understanding”).

When the evidence behind a document didn’t show a consistent “intent of the makers,” 18th century courts used a substitute: how an objective observer would have understood the document (“original meaning”).

Good legal drafters—and that certainly includes the Constitution’s framers—write documents with an eye to how courts will interpret them. So fidelity to the Constitution requires us to interpret it in the way familiar to those who adopted it.

Incidentally, the “intent of the makers” way of reading documents had been around for centuries before the Constitution was written. The Supreme Court generally was faithful to that method for the Constitution’s first 150 years. The recent claim that originalism is a new invention is pure bunk.

Should Textualism Be Applied to the Constitution?

Remember that the Constitution was written in the belief that courts would seek the “intent of the makers” by examining outside evidence as well as the words of the document. Adopting another mode of interpretation would distort the Constitution.

For example, the Constitution bans “ex post facto laws.” A textualist might think an “ex post facto law” was any retroactive law. But the constitutional debates show an agreement that the phrase would be limited to retroactive criminal laws. Consistent with the methods of the time, in 1798 the Supreme Court adopted the latter meaning, relying largely on prior state records and constitutional debates that ratified the Constitution—the original understanding.

First: Most federal statutes are modern, but the Constitution adopts language deriving from an 18th century legal and political environment. You often must go well beyond the text to understand that language.

Second: Members of Congress usually are unaware of statutory details because there are so many statutes and they’re often very long. But there’s only one Constitution. It’s relatively short. It was read and debated publicly, section-by-section, for nearly three years. We have excellent records of that debate. There were no congressional staffers around to manipulate meaning. The Constitution’s advocates carefully and repeatedly explained the terms of the document with remarkable consistency (pdf).

Why the Confusion Between Textualism and Originalism?

I think the confusion about applying textualism to the Constitution arises partly because law professors and commentators follow trends at Harvard Law School—much as the mainstream media follow the New York Times. Constitutional publications from Harvard tend to focus on current controversies rather than on the Constitution’s actual meaning. When 18th century law books from the Harvard libraries became available online, I was stunned by how little they had been used.

Because of Harvard Law School’s leadership position, its deficiencies affect all of modern constitutional law. A symptom of this is that none of the six writers contributing to “A Matter of Interpretation” (all of whom had Harvard degrees) apparently knew the original meaning of the First Amendment phrase “the freedom of speech.”

It isn’t just that Harvard isn’t focusing on the original Constitution. Some of its publications actively mislead. In 1985, Harvard Law Review published an article by a young professor claiming that the lawyers and courts of the founding generation were purely textualists. The article contained flaws the editors would have found if they had cared to: erroneous footnotes, misleading statements, and inadequately researched claims. But the editors apparently didn’t care, possibly because the article seemed to rebut the Reagan administration’s adherence to “original intent.”

Since the piece was published by Harvard, few challenged it, and in the ensuing 20 years many commentators relied on it. It was not until 2007 that I was able to correct the record, showing that the Founders were not textualists after all (pdf).

Now let’s “circle back” (to repeat a worn phrase) to the article in Slate mentioned at the beginning of this essay. The author misstated the meaning of originalism, textualism, and strict construction. He also repeated the widespread myth that the Constitution’s Necessary and Proper Clause “is an extremely broad power, appearing to allow Congress to do pretty much as it pleases with no real defining limits.”

On the contrary, historical and legal research on the Necessary and Proper Clause shows that it was fairly well defined and much more limited.