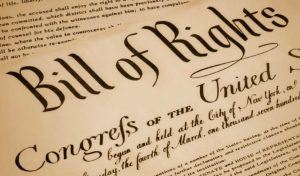 Congress Finds Even More Reasons To Disregard The Bill of Rights

There’s nothing so dangerous as a politician who undermines the Bill of Rights during a moment of tragedy or crisis.

With news that Congress is on its way to passing new gun control laws that will make it easier for bureaucrats to disarm law-abiding Americans, the United States is once again repeating the egregious mistake of responding to a perceived “emergency” by crippling constitutional protections for Americans’ unalienable rights.

First we had the post-9/11 passage of the Patriot Act and its creation of a national security surveillance state that tracks and records Americans’ digital communications despite the absence of probable cause, legal warrants, or explicit consent. Then we had the Department of Homeland Security’s recent flirtation with a “disinformation board” meant to regulate speech and censor points of view at odds with the government’s officially sanctioned “narratives.”

Now we have a renewed push for “red flag” laws intended to deprive Americans of their weapons without proper due process or criminal conviction. Over the last 20 years, America’s First, Second, Fourth, and Fifth Amendments have been under sustained attack, and, amazingly, it has been elected officials sworn by oath to “support and defend” those same amendments who have led much of the charge.

There’s nothing so dangerous as a politician who undermines the Bill of Rights during a moment of tragedy or crisis. Those rights, set forth as the first ten amendments to the U.S. Constitution as a redundancy to make explicitly clear what is beyond the scope of the federal government’s enumerated powers, are not wishy-washy suggestions meant to be ignored during times of “emergency.” On the contrary, it is during such times when their safeguards become most critical.

After suffering a terrorist attack, or enduring the ravages of lockdowns, or reeling from the staggering loss of young murder victims, trading freedom for the alluring promises of peace and security is at once reckless and irresistible. That is why our first ten amendments are a necessary line in the sand, so to speak, a caution from one generation of Americans to the next about the dangerous predilection of ever-encroaching government power to descend toward outright tyranny.

In this way, the Bill of Rights represents both a prohibition against illegitimate government action and a kind of easily digestible warning label counseling ordinary citizens: should your government attempt to infringe these most basic rights, then you will know that your continuing freedom is in jeopardy.

Too many elected officials today speak of the protections within the Bill of Rights as if they were created out of thin air and can be erased as indiscriminately as they are perceived to have been written down. It should be noted that many of the original ratifiers of the U.S. Constitution and its subsequent first ten amendments feared later generations would come to this erroneous conclusion.

Some opposed to the explicit adoption of a Bill of Rights thought it unnecessary, since the federal government’s powers were already strictly limited to those enumerated. They also worried that guaranteeing certain specific rights might have the perverse effect of endangering American freedoms not affirmatively recorded.

The Ninth and Tenth Amendments’ dual assurances that “The enumeration in the Constitution, of certain rights, shall not be construed to deny or disparage others retained by the people” and that “The powers not delegated to the United States by the Constitution, nor prohibited by it to the States, are reserved to the States respectively, or to the people” were meant to redress this risk. The Bill of Rights, in other words, provides expansive protection for individual liberty, constrained only by those powers constitutionally delegated to the federal government.

This moral idea — that personal freedom should be maximized and government power minimized — has always been revolutionary. It recognized that all legitimate power first originates with the people before they voluntarily cede some of their power to a functioning government. Conversely, when Congress decides that it may disregard the express prohibitions set forth in the Bill of Rights in order to pursue its own policy preferences, then it resurrects that same system where those with power “rule” and those without power “obey.”

To have any value, individual rights must belong wholly to the people. If personal freedoms were understood as nothing more than “gifts” from the government to the people, then they would be reduced to mere “privileges” either granted or denied according to the state’s prerogative. For unalienable natural rights to have substantive meaning, they must be inherently possessed by individual Americans, immune from the vagaries of government whim.

For free speech, the right to self-defense, freedom from unreasonable search and seizure, and due process to protect Americans ably from the potential threats of government tyranny, they must exist irrespective of any government action seeking their dilution or outright abrogation. Whereas man-made laws may sway from side to side when a nation faces heavy winds, it is imperative that unalienable natural rights never bend.

Congress always has a good reason for disregarding the Bill of Rights. It’s just a “red flag” law targeting “crazies with guns.” It’s just a little warrantless surveillance meant to stop “domestic extremists.” It’s just a little regulation of speech necessary to counter “disinformation” and “lies.” Every new restriction on Americans’ freedom is always touted as instrumental to “saving lives.”

There’s never any time, it seems, to stop and ask: who will be empowered to judge which Americans are “crazy” or “extremist” or “spreading lies”? Who will be given the authority to decide which Americans have unalienable rights and which Americans do not? When rights are reduced to nothing more than government “privileges,” after all, it matters a great deal who will be handing out those “gifts.”

As Congress and President Biden look to undermine the Second Amendment with new gun control laws this year, don’t forget the hidden costs. When rights remain as strong as oak, they endure regardless of any perceived “emergency.” When rights become as malleable as plastic, though, they melt quickly under even the gentlest sun.